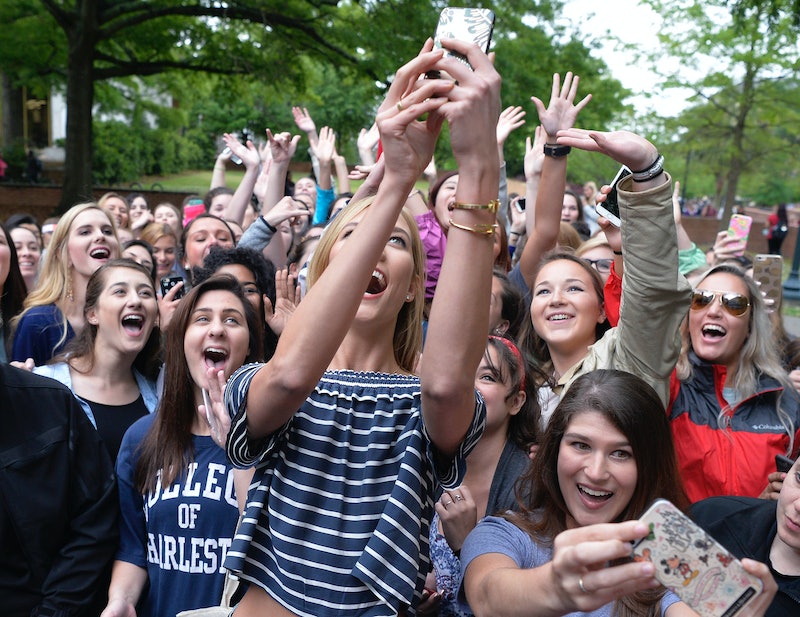 While Taylor Swift may count her as a BFF, the stunning and statuesque Karlie Kloss is a woman and a model of the people. Her ardent fans took to Twitter to express their joy over Karlie Kloss being named to the TIME 100 Most Influential list of 2016. Kloss gives new meaning to the term "role model," since she spends her spare time off the runway learning computer programming and encouraging other females to do the same, which makes her additionally awesome. She is such a source of inspo. Her academic pursuit is also one of the key reasons that she was selected to the prestigious TIME 100 Influential list. Beauty and brains? That's quite an influential combo. It's amazing to see a model, who works in an industry some consider frivolous, use her fame to support and empower other women.

The Twitterverse was abuzz with excitement over Kloss being recognized for being so darn rad. Her fanbase runs far and wide and its members let it be known just how stoked they were about Kloss' latest accolade by posting about it all over social media. Let's have a look at 11 of the best Twitter reactions to Kloss being named to the TIME 100 Influential list for 2016.

So far, many of the responses came from fan accounts who were busy updating the larger fanbase with details.

She is literally a role model!

Hold on, indeed! It's true.

This is certainly an honor of which fans can be proud.

There are just so many reasons to be proud of Karlie Kloss.

This fan account was quick to acknowledge the accolade.

Same! Her dedicated online army was quick to spread the word to the rest of the "team."

It seems that this fan account was grateful to TIME for giving Kloss her well-deserved props.

It's actually worth mentioning that fans of Kloss, Swift, and the Kloss x Swift friendship love seeing them featured together in any capacity, like in this photo from the 2015 TIME 100 event. #TBT

That digital lingo/hashtag got the point across!

This! This is another reason why Kloss was selected.

There you have it. A lot of fans are extremely proud of their heroine Karlie Kloss.... as they should be.