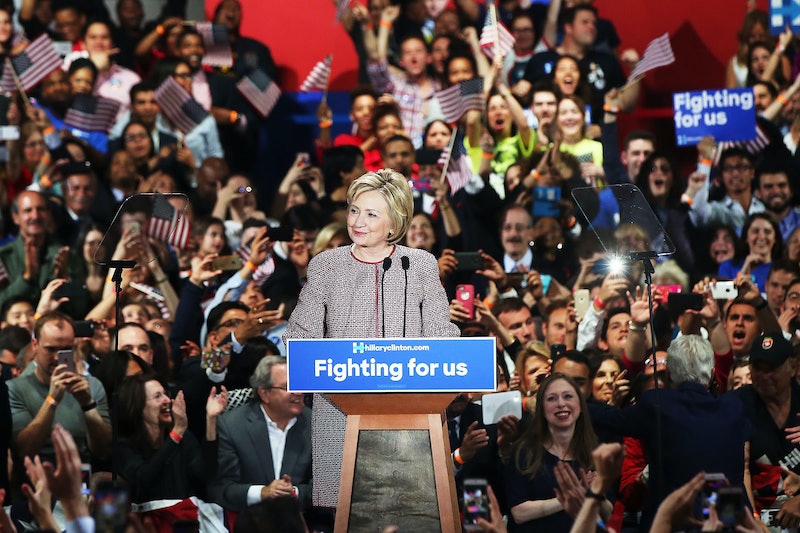 Although she is fresh off a crucial victory in the New York primary, Tuesday will be a big day for Hillary Clinton, with five more states holding primaries. She'll have to make gains in all five states if she wants to get closer to sealing the Democratic nomination. One of the big questions is: Will Clinton win Maryland? If all goes as the pundits are predicting, it's all but a done deal for the former secretary of state. Clinton is widely expected to beat rival Bernie Sanders in the Maryland primary on April 26. Polls leading up to the event have shown her maintaining a respectable margin over Sanders, and the most recent one, from Public Policy Polling on April 19, puts her up by a resounding 25 points.

Clinton and Sanders will battle for 118 delegates in Maryland, which are awarded proportionally. Clinton currently holds 1,446 of the 2,383 delegates needed to win the nomination; Sanders has 1,200. As ever, the superdelegates are very Ready for Hillary, with the former secretary of state holding 502 to Sanders’ 38.

Following his loss in the state where he was born and raised, Sanders seemed like a goner. Many in the media (including me) believed Sanders no longer had a path to the nomination — at least, not a plausible one. It’s not a mathematical impossibility (as it is for Texas Sen. Ted Cruz following his own crushing loss in New York). Sanders technically can still beat Clinton, but he’ll need to win 73 percent of the remaining delegates to do it. And as much as his ardent base and his biggest cheerleader, campaign manager Jeff Weaver, want to believe it, there’s just no real shot at that happening. It kind of pains me to say it, but Maryland will simply be the next nail in the coffin.

Once again, it seems that Sanders’ weakness with nonwhite voters — and Clinton’s strength with that demographic — is coming back to bite him. Per the Public Policy Polling release:

On the Democratic side Hillary Clinton looks to be headed for a resounding victory, with 58 percent to 33 percent for Bernie Sanders. Clinton's key is that she's winning African Americans — who are likely to be close to 40 percent of the Democratic primary electorate — 70/25. She has a more narrow lead with white voters at 50/41.

Also, the report notes: "One other thing to Clinton's advantage is that 86 percent of her voters say they're firmly committed to her, compared to 65 percent of Sanders' who say the same for him. Clinton leads in every party of the state except Western Maryland, although it's closer in the Baltimore suburbs." Clinton apparently has a loyal fanbase in Maryland, which mean she's got the Old Line State all but locked up.