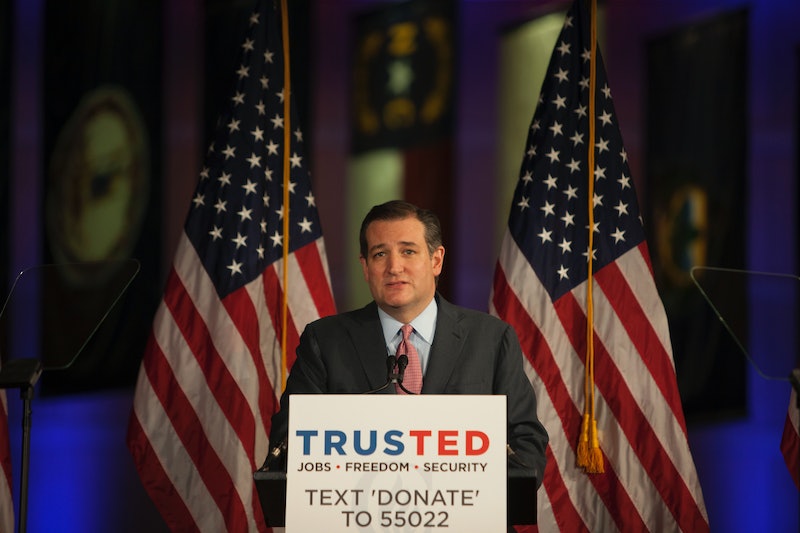 Perhaps still stinging from his New York loss,Ted Cruz declared that if he can't have an uncontested Republican nomination, no one can. For the first time, Cruz declared outright on Wednesday that the GOP is headed for a brokered convention this summer. Watch out, Cleveland. TrustTed will be there, come hell or high water.

Cruz went on the Philadelphia-based Chris Stigall Show Wednesday ahead of Pennsylvania's primary on April 26 to downplay Trump's victory in the New York primary and inform the American people that, believe it or not, he is actually the one who's winning. (Sure, Ted, keeping telling yourself that.) Stigall, who seemed amenable enough to this logic, mentioned the increased likelihood of a contested convention and asked Cruz what his path to victory was.

One need not look far to find the reason behind Cruz's timing in making this contested convention proclamation. Now that he's lost the New York primary so badly that one enterprising congressional district even picked Ben Carson over him, Cruz has — from a quantifiable, mathematical, delegate-counting standpoint — lost his chance at cruising (pun intended) into Cleveland with the nomination. But what Cruz said about Donald Trump not having a chance, isn't really true. In fact, he may be living up the "lying Ted" nickname Trump gave him. Trump could still be the uncontested nominee, though that's not a given by any means.

The rest of Cruz's Chris Stigall Show segment was nothing new. It's just a repeat of the same song-and-dance I've seen before in which Cruz tries to explain why a good portion of the country (and his colleagues) find him pretty repugnant. Washington doesn't like me because I stand with the American people, not them; everyone else in this race has been nasty but not me, I focus on the issues; we're going to repeal every word of Obamacare; Donald Trump is terrified to debate me one-on-one. Yeah, yeah, yeah.

In the meantime, both Cruz and Trump (and Kasich, sorry I almost forget you there, Kasich!) look ahead to April 26, which holds five state primaries, and the eventual big one on June 7: California.