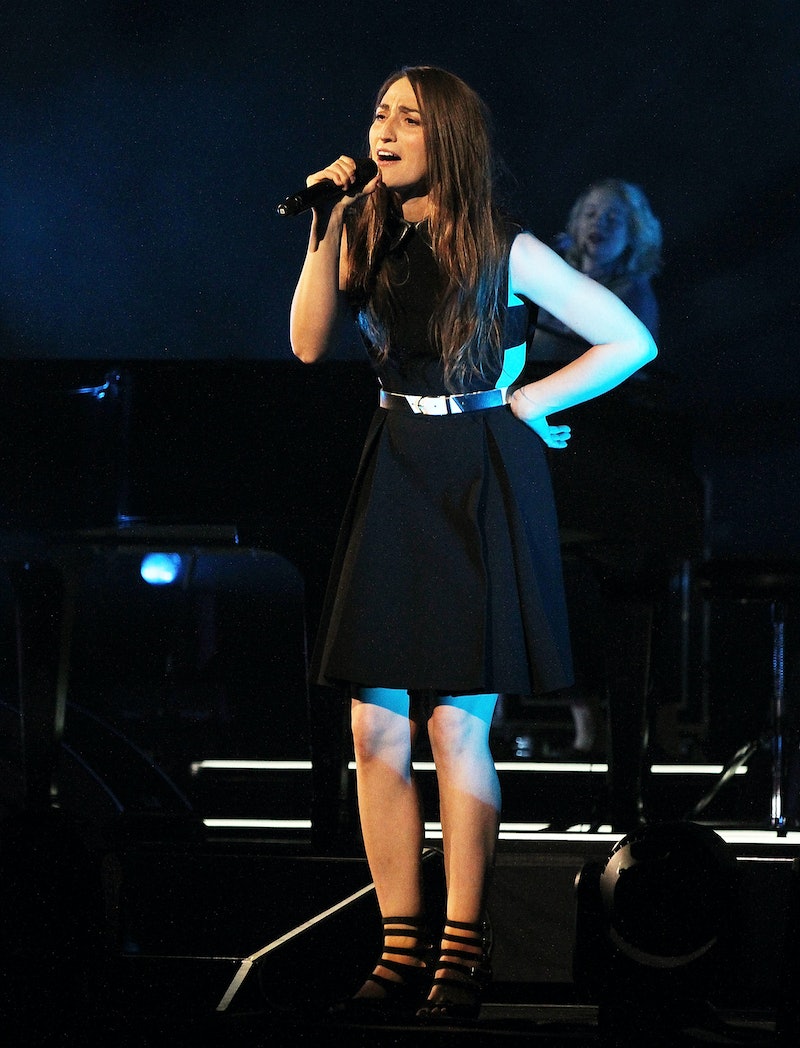 Sara Bareilles' debut Broadway show, Waitress, has only just begun it's run, but she's already had it with the cell phones! The Grammy-nominated singer/songwriter is taking now taking the stage before performances to warn audiences to turn of their phones — with the help of her new 40-second song. Yeah, Bareilles' "Turn Off Your Cell Phone" lyrics are just about the cutest passive aggressive statement I have ever heard.

However, as Bareilles explained in an interview with the Associated Press , the song didn't just come out of no where. In fact, numerous Broadway theater-goers having their phones go off during the show's preview performances is what sparked her inspiration. There is no way she is letting the disruptive, disrespectful madness continue. "The team and I spoke after the show, and I suggested a cell phone announcement that I would write and sing myself,” she said. “I decided to rewrite the words to a song of mine called ‘Cassiopeia,’ and try to make something funny, in the style of the show, but that would still get the point across.”

With these pretty direct lyrics, there's no denying that the point has gotten across.

"Come in close. Now it's time, to tell you one thing. Every show can be ruined by a... Brr-ing! Brr-ing! Now's the time. Do it while I sing cause, no one's gonna like you if your phone rings. Hurry up, so that we can start the show. Thank you so much! Now turn off your cell phone!"

Bareilles is not the only artist who feels this way about the noises and flashing screens of cell phones in the audience. In fact, last summer, Patti LuPone made headlines for straight-up taking an audience member's cell phone from them during her performance in Shows For Days. And, during a performance of A Steady Rain, Hugh Jackman actually brought the entire show to a halt to turn to the audience member whose phone was ringing and say, "We can wait…Don’t be embarrassed. Just grab it.” The list of instances such as these just seems to be growing and growing.

Bareilles' cute new ballad being sung before her show (and hopefully more) might not bring an end to the theater-wide problem, but it certainly is one creative way to make sure the audience can't ignore the theater's rules. Personally, I would love it if Bareilles adapted the song for movie theater-going audiences as well. It could be just what AMC's revamped no-texting policy needs. Either way, "Turn Off Your Cell Phone" is incredibly fun to sing-along to, so excuse me while I go memorize it just so that I can bother my friends with it every time we go to the theater.

More like this
How To Listen To The 'Love Island' 2022 Soundtrack
By Liv Facey and Sophie McEvoy
You Might Want To Rewatch 'Elvis' For This Britney Spears Easter Egg
By Grace Wehniainen
The Tragic Reason Elvis Never Toured The UK
By Sam Ramsden
Photos Of The 'Elvis' Cast vs. Their IRL Counterparts Will Have You All Shook Up
By Grace Wehniainen
Get Even More From Bustle — Sign Up For The Newsletter