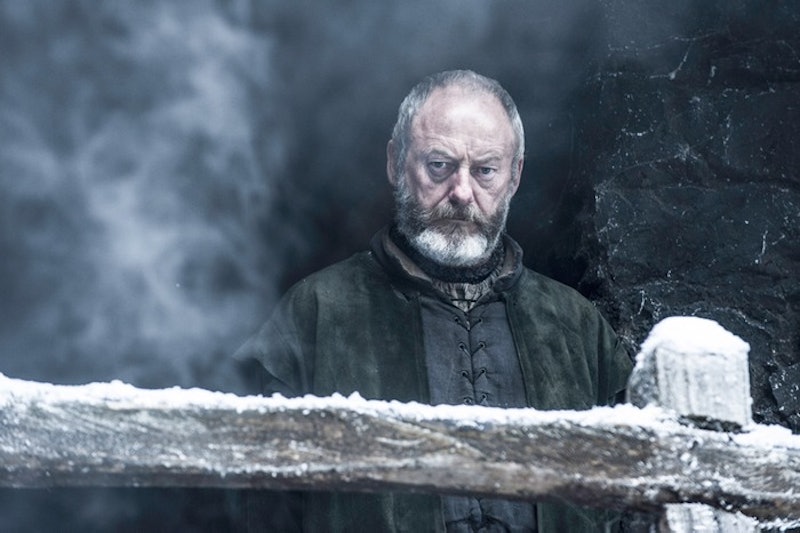 In many ways, I think Game of Thrones Season 6 will prove to be the scariest season of all thus far. Not because of the storyline or growing body count that I'm sure will follow, but rather due to the fact that we're all venturing into uncharted territory. Now that the HBO series is surpassing the books, we (much like Arya) are heading into this season completely blind. But thanks to the Season 6 trailer, and all other promos that have followed, viewers have been able to piece together a few vital clues as to where the storyline is going. One instance, in particular, that caught my eye in the trailer was seeing Ser Davos' defend Jon Snow's body against members of the Night's Watch. Because while I'm grateful to anyone who doesn't want to see that beautiful face burned beyond recognition, it seems strange for Davos to care, especially considering he's never had any interaction with the Lord Commander before now.

So why is Davos so adamant about protecting Jon Snow's body from harm? While all we have to go on is mere speculation at this point, the optimist in me wants to believe that he's trying to secure the body's safety so that Melisandre can perform a resurrection spell. It's odd to think of these two characters as working on the same side, especially in light of the part she played in burning Shireen alive. And yet, there are other moments in the trailer that suggests they will become allies with Melisandre breaking down and confessing to Davos: "The great victory I saw in the flames, all of it was a lie." Clearly, her faith has been shaken. Perhaps resurrecting Jon Snow is how it will become restored?

As for Davos' motivation, now that Stannis is gone he undoubtedly wants to find hope in a new leader and who better for the job than our favorite Bastard of the North? So if it's possible for him to be brought back, Davos may do whatever he can to make it happen. We know how fierce his loyalty to someone can be, and given his rather perfect line in the trailer: "I’ve never been much of a fighter. Apologies for what you’re about to see," I'd say that hasn't changed. He's willing to fight, perhaps even to the death, in order to protect Jon's body, which makes him my new hero.

We'll have to wait until the premiere to know for sure what exactly is going on in this intense scene, but if this Davos and Melisandre team-up eventually leads us to a resurrected Jon Snow then I am ALL about it. Jon may know nothing, but it looks as though Davos knows something we don't. And whatever that something is, it involves keeping the Lord Commander's body intact. Keep doing what you're doing, my friend, and may the gods (both old and new) to with you!

More like this
Emilia Clarke Shares More Details About The New 'Game Of Thrones' Series
By Maxine Harrison
Twitter’s Reaction To HBO’s ‘Game Of Thrones’ Jon Snow Spinoff Idea Is Chaotic
By Stephanie Topacio Long
Did *That* Character Really Die In The 'Stranger Things' Season 4 Finale?
By Grace Wehniainen
'Stranger Things' Fans Are Begging For Steve To Live For The Funniest Reasons
By Grace Wehniainen
Get Even More From Bustle — Sign Up For The Newsletter