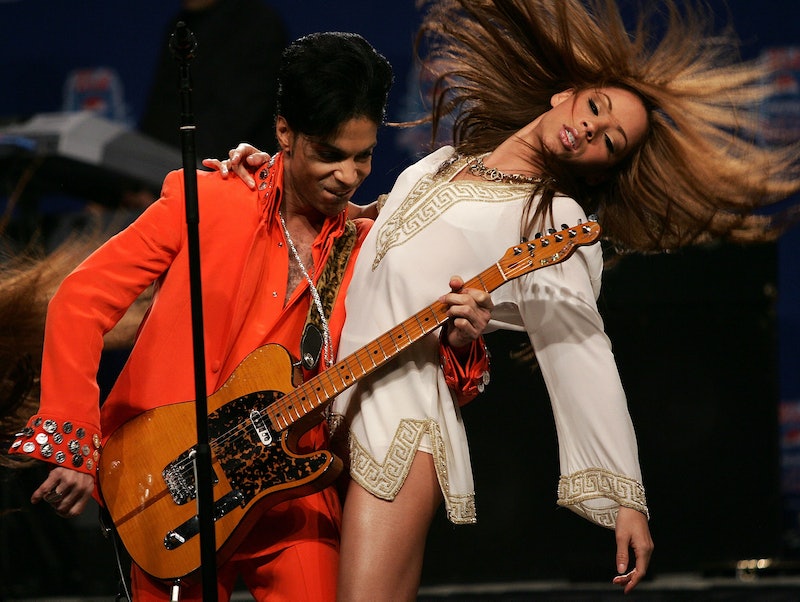 I grew up in the '80s, which meant that I grew up with Prince in the air. I was a little girl in the years after the release of his film and album Purple Rain, a time when you couldn't turn on a radio without soon hearing the opening synth chords of "Let's Go Crazy." You could barely turn on TV without some pundit commenting on this weird guy who was always wearing purple and writhing around, and wondering why he was so popular. When he performed at the VMAs in pants with the ass cut out, or when he shot a video for "When Doves Cry" that featured him nude and rolling around in a bathtub, our parents laughed — what's wrong with him? Women are supposed to do those things!

His presence in my childhood was as constant and mysterious as that of Ronald Reagan or Jesus Christ — someone who seemed to be everywhere, all the time, but whose mission remained inscrutable to me. I liked Madonna; I could understand why someone would want to dance around in a wedding dress and sing "Holiday." (Like, we all would if we could, right?) But all I grasped about Prince was that the adults in my life found him laughable, yet seemed vaguely threatened by him. He was simply another flummoxing cog in an adult world that I didn't even both trying to make sense of.

In 1993, he changed his name to an unpronounceable symbol; we all found out years later that it was all about a contract dispute with his record company, a clever way to mess with them and the media. But at the time, people just thought it was about a weirdo acting weird in response to his declining cultural relevance. I liked him as a camp figure by then, the same way I loved Dolly Parton's hair or John Water's movies — but I'd never actually sat down and listened to a Prince song. I thought of him as a fading pop star, whose obsession with the color purple and the letter "U" made him seem more like a third-string Batman villain than a thoughtful artist who could contribute anything serious to my life.

In 2003, I was at O'Hare Airport in Chicago, waiting for a connecting flight to Las Vegas, when I bought Purple Rain on CD. It was in the dollar bin; I was in a bad mood and wanted to see if spending money would make me feel better. I was 21, but still confused by almost everything. I popped his CD into my Discman, and by the time the plane was nearing the part of Nevada covered in glowing lights, I realized that the goofy, purple-obsessed guy in the assless chaps actually understood something about issues I had struggled with my whole life.

See, in the many different phases of my life, there's been one constant: I love men, and I especially love men who completely disregard the idea of "masculinity." That could mean anything from wearing the occasional kilt to feeling intense love and empathy for animals — but being a man who breaks from traditional masculine values in some way has always been the absolute number one thing that got my motor running. If you're a woman-loving man who was already getting harassed in the second grade by bullies who insisted that you were gay, I'm probably into you.

I've been with all kinds of guys through the years, of course — I did most of my romantic exploration before the invention of dating apps where I could have just put in "Straight woman seeks dude who likes banging chicks, wearing eyeliner, talking about feelings, and analyzing Yves Saint Laurent's original sketches" — but it was an element of my sexuality that was clear to me long before I ever heard ridiculous concepts like "alpha and beta males." F*ck that — I wanted a zeta male, someone who didn't have time for any of this competitive masculinity bullshit because he was busy being true to himself (and having sex with me).

In the grand scheme of sexual struggles that people have to endure in this world, it was a small one to have; but it existed. People (who thought they were helping me!) openly speculated on my boyfriends' sexuality, wondered if I was deluded about their attraction to me. I sometimes wondered if I was deluded, too. More than once, I caused trouble with a boyfriend because I let the criticism of others get into my head and actually asked the guy who was screwing me if he was really into women. It wasn't even that my boyfriends were "feminine" or didn't identify as men — they just didn't take pains to appear macho, or fear doing things that supposedly were "for girls." I knew that this was what I wanted and needed, but I didn't understand why it had to be so hard.

And I didn't realize, until that red-eye to Vegas, that Prince had the answers I had been looking for all along.

Looking back, the adults in my life were so invested in laughing at Prince because he was one of the first American celebrities to openly declare that he did not give a sh*t about what you thought it meant to be a man (Bowie was at work on this first, of course, but Prince was homegrown). Of course, Prince would never actually say that; he had better things to do than talk to the American public about their gender hangups, or explicitly reassure anyone that he was straight and male-identifying. He had to write over 40 Billboard-charting hits for himself and other artists throughout the course of his career, OK? He was busy!

But when he was at his peak of fame, in the '80s, his every public movement felt worth a thousand words of gender discourse. Prince did sometimes declare himself to be also beyond gender — as he sings in "I Would Die 4 U," "I'm not a woman/ I'm not a man/ I am something that you'll never understand."

At the same time, he clearly declared his sexual interest in women. Constantly. In Prince's songs, engaging with female sexuality is a metaphor for everything, and everything is a metaphor for female sexuality. Though I recall men in the '80s making frequent jokes speculating on the nature of Prince's sexuality, if you spend a second listening to his lyrics, it's more than obvious that he was interested in women. I think the idea that a man who has little interest in gender conformity was also ravenously sexually interested in women just freaked people out so f*cking badly, that all a lot of them could think to do was pretend that it wasn't happening. But it was happening.

To Prince, gender constructs were sometimes a toy, sometimes a hindrance, but never something worth taking very seriously. In "Jack U Off," he offers to (you guessed it) jack off a female lover, despite the fact that in 1981, the year the song was released, the term "jack off" was used almost exclusively to describe male sexual activity. In "If I Was Your Girlfriend," he bemoans that there's a level of closeness he could never feel with his ex, because they're separated by the archetypes that inform most straight relationships. He tells her, "If I was your girlfriend/ Would U remember 2 tell me all the things U forgot/ When I was your man?" Prince inhabited a world where loving women didn't mean you also had a fear of being too much like them.

In Prince's world, you spent your time trying to understand spirituality, or family, or the mysteries of love; wasting time trying to prove that you could fit into masculine gender tropes was even sillier than writing lyrics about a "purple banana." I certainly won't make the argument that Prince was any kind of feminist icon — many of his lyrics leave a bit to be desired on that front — but I will argue that for many of us, of all genders, Prince changed our minds about what was allowed. Prince acted macho when he felt like it (he drives a motorcycle!) and feminine when he felt like it (he wears a pirate blouse!). Prince knew that gender was all a game — and that instead of worrying about how our gender performance reads to others, we should just play the game in the way that gave us maximum pleasure.

In the decade-plus since that plane ride, loving Prince became something that ate up a decent chunk of my time and a not-insignificant amount of my money; I've bought memorabilia and gone to every screening of Purple Rain to occur within a 10 mile radius of me. But it also became something that informed the woman I became. Loving Prince helped me understand that I wasn't, as some of my old friends had predicted, "doomed to end up with a gay guy." I was blessed to know that what I wanted was a man who only cared about being himself, who wasn't going to be bullied into engaging with gender expectations (or shame me for not always engaging with them myself).

When I saw Prince in concert, in 2011, he played perfectly for hours. I didn't imagine that he could ever die, because he seemed beyond the kind of petty human nonsense that bound the rest of us; his gift to us all was letting us taste, for the length of a three or four-minute pop song, what it was like to be there with him.