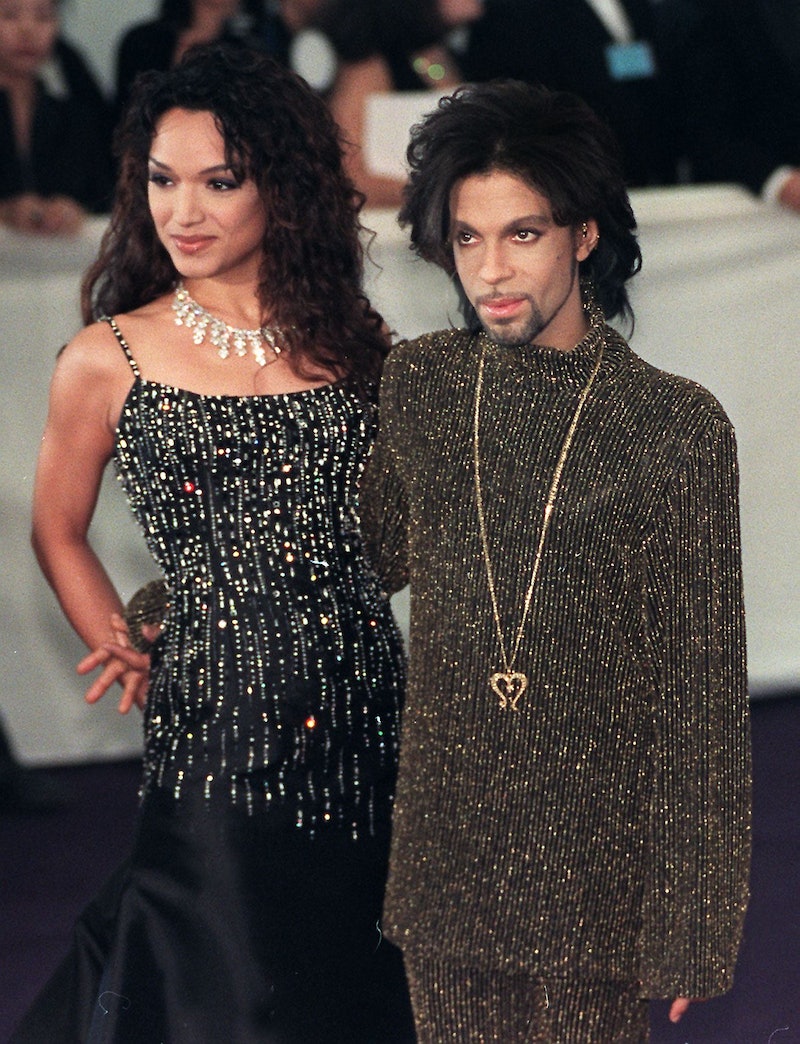 The music world won't soon recover from the loss of one of its greatest icons — Prince has died at the age of 57. The "Little Red Corvette" singer leaves behind a huge legacy, and had an impact on fans all over the world. It's easy to go on and on about his many artistic accolades, his impressive library of work, and his inimitable style, because the singer was certainly well loved. And, as Prince's dating history shows, that carried into his personal life, too.

TMZ broke the news on April 21 that Prince died, which a Prince rep confirmed in a statement to Bustle: "It is with profound sadness that I am confirming that the legendary, iconic performer, Prince Rogers Nelson, has died at his Paisley Park residence this morning at the age of 57." The loss was deeply felt by many as celebrities and fans took to Twitter to pay their respects to the music legend, and share the Prince moments that meant most to them. Certainly, the news is tragic, as we lose yet another one of the world's great talents. Prince wasn't married at the time of his death, or currently in a public relationship with anyone, but his life was filled with romance. Here are a few of the people he was romantically linked with during his life.

In 1996, Prince married his first wife Mayte Garcia, who was one of his backup dancers. The couple had a son, Boy Gregory, who was born with a skeletal condition called Pfeiffer's Syndrome, and tragically died a week after birth. The couple divorced in 2000. In a 2015 interview, Garcia described her relationship with Prince as "amazing and surreal."

Prince was also married to Manuela Testolini, who was an employee at the singer's charitable foundation, People reports. The two tied the knot in what LA Weekly described as a secret Jehova's Witness ceremony in 2001, but the marriage didn't last. Testolini filed for divorce in 2006.

The two dated in the '80s, when Basinger was starring in Batman. In a 2015 interview with Daily Beast, Basinger described her relationship with Prince as being "a really special moment in time." "Hey, listen, I don’t really have boundaries, so I enjoyed that time of my life," she said. "It was a really special moment in time, and I have great memories. I don’t put a lot of restrictions on myself, let’s just put it that way. If there’s someone I connect with, we’ll go on these rides together. So that was a neat time in my life."

That's right — apparently the Baywatch star dated the singer back in the '90s. He even helped write and produce her 1993 album, Carmen Electra .

Prince dated Nona Gaye, daughter of singer Marvin Gaye, for three years starting when she was 18. "I just thought he was beautiful," she told People in a 2003 profile, adding that her "heart was shattered" following their breakup.

The singer will be deeply missed.