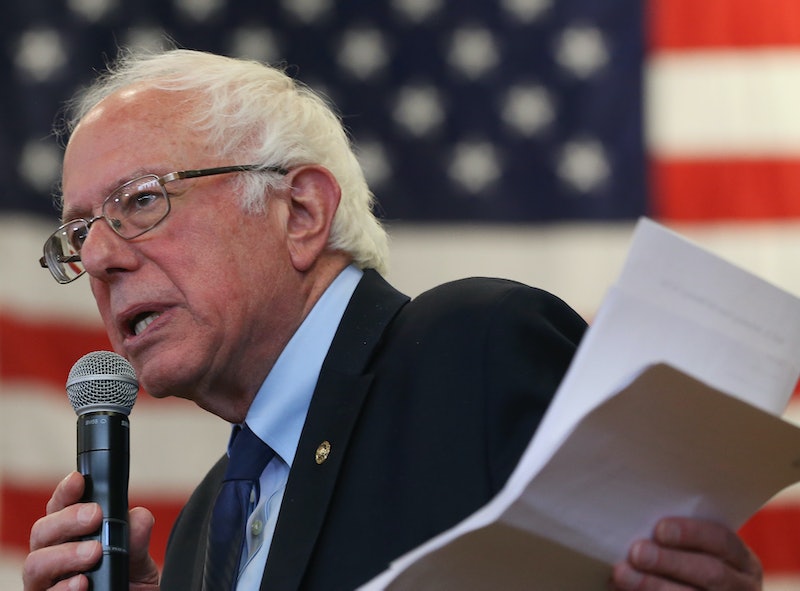 Right now, the polls aren't looking good for the senator from Vermont when it comes to the mid-Atlantic states. So, will Bernie Sanders win In Pennsylvania? The experts aren't optimistic that the Vermont senator will win the popular vote, but he could end up with a fair amount of Keystone State delegates. Over at FiveThirtyEight, Nate Silver says that Sanders currently has a 3 percent chance of winning Pennsylvania's closed primary at the time of writing, according to his analysis of current polling. Former Secretary of State Hillary Clinton is given a 97 percent chance of victory.

Polling averages show 53 percent of the state's Democrats are supporting Clinton, with 36.3 supporting Sanders. The Quinnipiac poll from the beginning of the month showed Sanders trailing Clinton 50 percent to 44 percent, though there were still 6 percent of the 514 Democratic respondents who said that they were undecided. However, the margin of Clinton's victory has only increased in subsequent polling.

Pennsylvania has some characteristics that seem to indicate that it could be favorable to Sanders and his campaign's message. Large areas of the state are rural, it lies in the heart of the Rust Belt, and there are significant concentrations of college students attending the state's 175 colleges and universities.

However, there are structural factors at play that favor Clinton's candidacy. One of those factors is the Hillary Victory Fund, which the Pennsylvania Democratic Party is a part of. This supercharged joint-fundraising committee structure has allowed for Democratic donors to give more money than ever this election cycle, since donors can max out their allowable donations to each of the 33 state parties, and the campaign. Eighteen of the state's 21 superdelegates have also already declared their support for Clinton, including Gov. Tom Wolf and former Gov. Ed Rendell.

Pennsylvania went to Clinton in 2008 after a contentious primary battle against President Obama by a margin of about 114,000 votes, or 9.2 percent. Clinton gained 85 delegates, while Obama got 73 in the end. So, even if 2016 plays out like 2008, Sanders would still likely walk away with at least 87 delegates for the national convention — Clinton would walk away with 101 if she wins by the same margin as in 2008. While it isn't an ideal position for the Vermont senator to be in, that just makes the state of California even more relevant come June.

Voters in Pennsylvania can check their party affiliation and registration status here. The Keystone State votes on April 26.