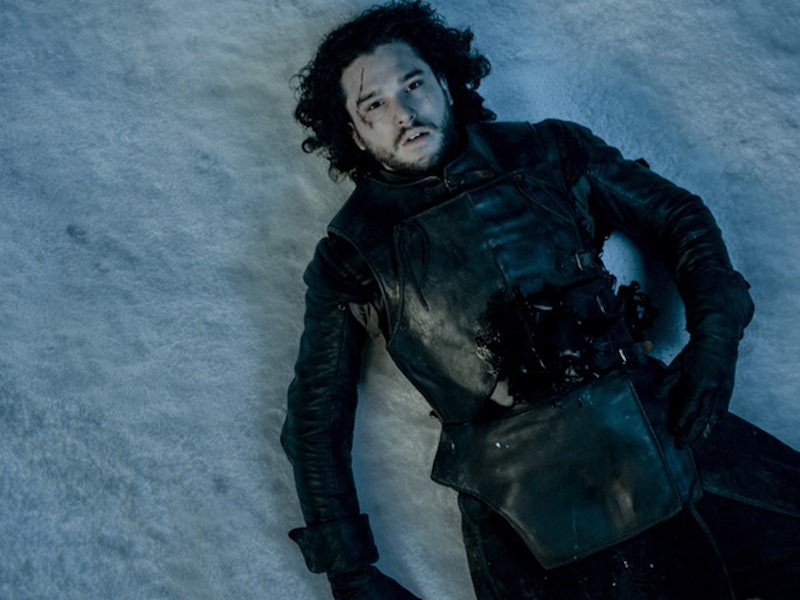 It doesn't matter how much evidence we've been shown or how many times Kit Harington himself denies it, fans are have remained adamantly skeptical about whether or not Jon Snow is really dead on Game of Thrones . Are we stubborn or just plain naive? Right now, that's still hard to say. But despite whatever answers the Game of Thrones Season 6 premiere may hold, you'll be hard pressed to sway anyone against certain theories, especially those that seem to make so much sense. Take, for instance, the theory that Jon Snow will warg into his direwolf, Ghost, after getting run through by the Night's Watch. When you really sit down and think about it, the idea doesn't just seem possible, but it's also highly probable.

For starters, there's the fact that we've already seen characters warg into various animals. Granted, Bran and Orell are the only ones we've witnessed doing this so far, but that doesn't mean it's beyond the Lord Commander's capabilities. If the R + L = J theory proves to be true, they he has both Stark and Targaryen blood running through his veins, which feels like the perfect recipe for experiencing a supernatural miracle. It's the ideal combination of fire (commander of dragons) and ice (ruler of Winterfell), so there's no telling what he could do if he put his mind to it.

But even if he really just is Ned Stark's bastard son, there's still quite a few indicators that warg-ing could still be within his grasp. (Warning: minor book spoilers ahead!) In the George R.R. Martin novel series A Song of Ice and Fire, the very last thing to come out of Jon Snow's mouth before succumbing to his fatal injuries is the word "Ghost." Why would Martin have Jon say that if it wasn't going to signify something important later on? I mean, I know the guy cares for his direwolf very deeply, but to have that be the last thing he says feels like more than just canine affection. What if it was Jon's way of summoning his spirit into Ghost's body?

It's been said that dying feels like a very out-of-body experience. That could quite literally be the case for Jon Snow. Plus, we're talking about a show with flying dragons and a building full of other people's faces. I'd say jumping into the body of an animal seems rather tame in comparison. It would also make Harington's reassurances that Jon Snow is dead entirely true. There really would be a Jon Snow dead body on the show. But his spirit, on the other hand, could be elsewhere, at least for the time being until Melisandre can (hopefully) work her magic and restore him to his human form.

Harrington himself has even alluded to the warg possibility, prior to his character's Season 5 fate, during a roundtable at Oxford Union last year. "I'd like to be a warg," the actor admitted. "I’d like to put myself into a wolf." And to add even more fuel to the fire, showrunner Dan Weiss responded to that remark saying, "Two words for you: Season 6." Sure, they make it seem like they were just kidding around, but what if they weren't. What if this was their way of hinting at Jon Snow's Season 6 journey? You can find the topic around the 22-minute mark in the video below.

Do I think that he would stay in Ghost's form forever? Absolutely not. But it would at least give the people at The Wall some time to figure out how to save him. And I think we can all agree that Jon Snow as a direwolf is certainly much better than no Jon Snow at all. So until we get actual confirmation that this is not an option, I'm holding out hope that Ghost will be the key to Jon Snow's inevitable resurrection. (*fingers crossed*)