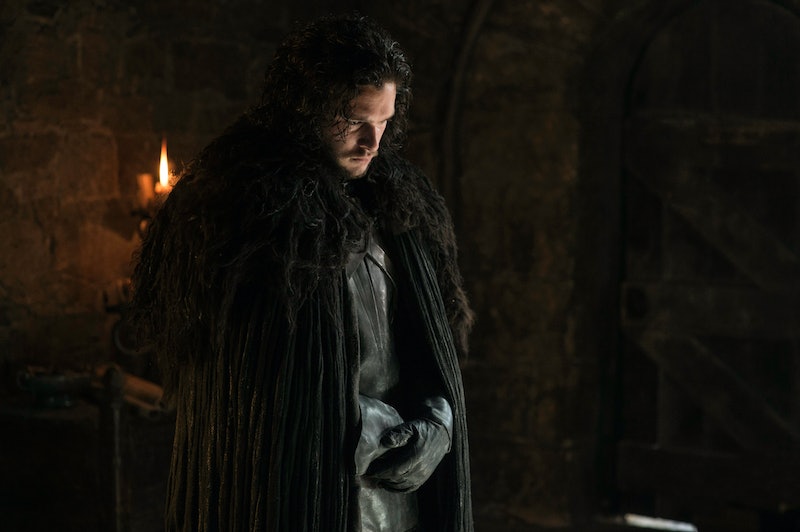 Secrets and lies are never in short supply on a show like Game of Thrones. I mean, we're talking about a world where weddings are turned into full-on massacres and dragons transform humans into roasted shish kebabs. So yeah, this series has gone out of its way to teach its fans to expect the unexpected. But aside from all the bloodshed and backstabbing, there is one matter that has come to the forefront of every viewer's mind these days and that's the Game of Thrones theory about Jon Snow's true parentage. For quite some time now, book and TV fans alike have speculated that Jon is not the bastard child of Ned Stark like we've been told to believe, but rather the illegitimate son of Lyanna Stark and Rhaegar Targaryen, otherwise referred to as the L + R = J theory.

Obviously, this would prove to be a significant game-changer for the show, given that Jon's Targaryen lineage would make him an ideal and worthy candidate for the Iron Throne. And while this bloodline connection has yet to be outright confirmed, the writers have made a special point of referencing Rhaegar and Lyanna on multiple occasions this season. They have to be doing so for a reason. In fact, the whole thing made me curious enough to go back and re-watch the GoT pilot to see if I could pinpoint any possible clues, even way back then, that hinted at who Jon Snow's real parents were. And, as it turns out, my efforts proved to be surprisingly successful.

First of all, hey, remember when the Starks were all together under the same roof, safe and sound? Yeah, I didn't either, which is a big part of what made this pilot re-watch so informative yet heartbreaking all at the same time. (If only they knew the horrors that lie ahead of them!) But if you were able to peel your eyes away from this glorious family reunion, you might have noticed a very interesting conversation Jon Snow had with his Uncle Benjen, who seemed less than thrilled at the thought of Jon joining him as a member of the Night's Watch.

"You don’t understand what you’d be giving up," Benjen explained upon his arrival to Winterfell. "We have no families. None of us will ever father sons." And even though Jon immediately rebuffed the argument, claiming not to care about continuing his family line, Benjen added this little nugget of information: "You might, if you knew what it meant." Now, granted, this could just be Benjen suggesting that his nephew can't fully appreciate the significance of parenthood until he gets older. But what if there was even more meaning hidden behind that sentence? What if what Benjen was really trying to say was that Jon would care more about fathering children if he knew it meant creating an eventual heir to the throne.

Odds are Ned wouldn't have been able to keep this massive secret to himself. He may have even needed help carrying the whole thing out, which means his brother Benjen may have known way more than he was letting on. It would certainly help to explain why he never seemed that thrilled at the thought of Jon joining him at the Wall. An oath of celibacy isn't exactly ideal for someone who has the genetic backing to claim the Iron Throne. Otherwise his rule would end with him.

But that wasn't the only hint I was able to uncover. Call me paranoid, but I felt like Ned looked extremely guilty about something when he was chatting with King Robert in the Stark family crypt. Robert was paying his respects to his long-lost love, Lyanna, by placing a feather in the hand of her statue. (Yes, the same feather Sansa just recently discovered there during one of her secret meetings with Littlefinger.)

Robert asked Ned to be the new Hand of the King, which led Ned to immediately drop down on his knee and state "I am not worthy of the honor." Was he just being modest? Maybe. But there's also a chance he was feeling guilty of lying to his old friend (and king) about what really happened to Lyanna and the secret child she had given birth to. You see, Robert would've killed Jon if he even thought there was a chance that Targaryen blood ran through his veins. So even though Ned might've been lying out of protection, I'm sure he'd still feel guilty about betraying his king's trust.

Now if only this conversation had actually come to pass…

Jon Snow may know nothing right now, but given all of these subtle clues, it's only a matter of time until he knows everything.