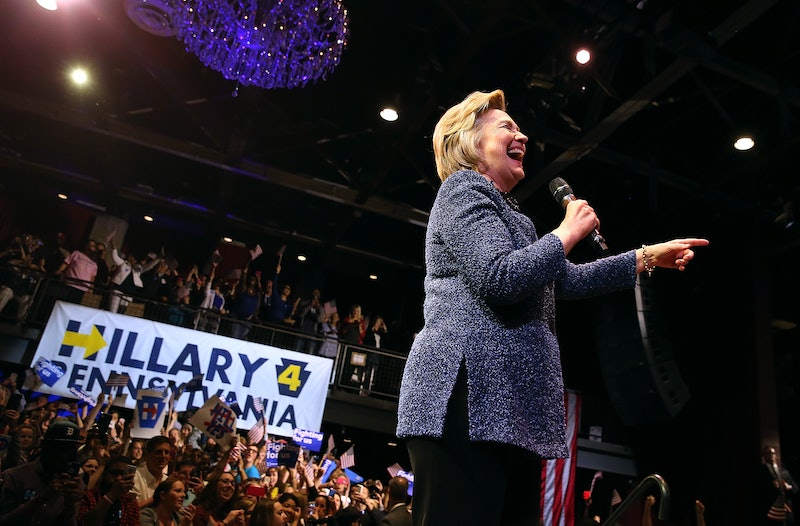 Now that New York is behind us, it’s time to turn our attention to all the little states that are about to drown us in primaries come April 26. Five states head to the polls Tuesday, including Connecticut. The question is this: Will Vermont Sen. Bernie Sanders be able to make inroads, or will Hillary Clinton win Connecticut? It's increasingly looking like the latter will be the case.

Clinton is expected to continue a winning streak there following her victory in New York. A new Quinnipiac University poll conducted in mid-April shows Clinton leading Sanders 51 percent to 42 percent (six percent are undecided). It follows her trend of modest but still solid leads in the smaller Northeastern states.

However, it's not like a win in Connecticut would have a huge impact on Clinton's quest to solidify her spot on the general election ticket. Connecticut has 71 Democratic delegates, to be awarded proportionally. Your Daily Delegate Math Refresher: Democratic candidates need to reach the magic number 2,382 to become their party’s nominee. Following her victory in New York, Clinton now has pledged 1,428 delegates, and Sanders has 1,151. Additionally, Clinton has 502 superdelegates to Sanders’ 38. From a mathematical standpoint, it is still possible for Sanders to win, but from a practical standpoint, it really does not look so good. That being said, 71 delegates split proportionally does ... not a whole heck of a lot for the former secretary of state.

Sanders and Clinton are tied among white voters in Connecticut, according to the Quinnipiac University poll. But while Sanders leads in the millennial vote in the Constitution State (the Nutmeg State?), Clinton leads him with the African American vote.

Though she’s already expected to win Connecticut, Clinton seems to be taking no chances. Her campaign is running an ad featuring the daughter of Dawn Hochspring, the principal of Sandy Hook Elementary who was killed in the 2012 massacre. The message? Clinton is strong on gun control reform. The obvious subtext is that Sanders is not ― an accusation that’s plagued him throughout his campaign and which will no doubt be on the minds of many as we turn to the state that saw the second-deadliest school shooting in our nation’s history, after the Virginia Tech massacre.

Although Clinton is the Democratic candidate who has usually been questioned about how liberal or progressive her values are, Sanders' record on gun control may make him look like the conservative in Connecticut.