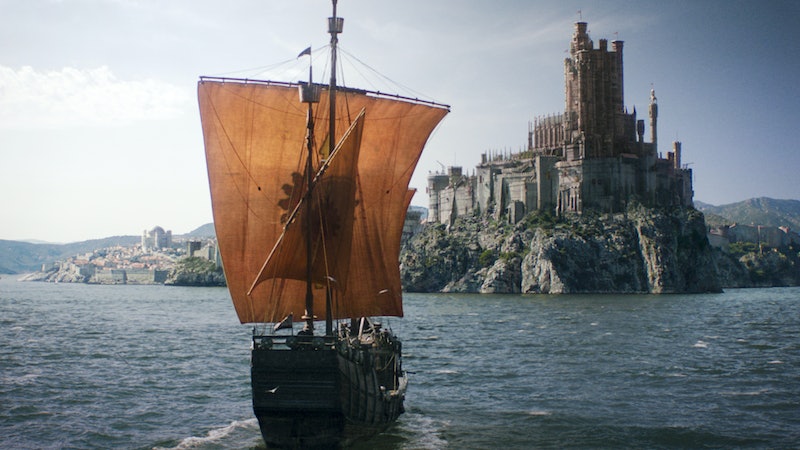 Jaime Lannister was one of the biggest villains after the Game of Thrones pilot, and now I'm actively rooting for him to have a moment of peace and happiness. When he returns to King's Landing in Season 6, he's going to have another rough reunion with his sister explaining How Myrcella died on Game of Thrones. The death of Cersei's daughter is the latest blow to the Lannister family.

At the end of Season 5, Ellaria Sand took avenging Oberyn Martell into her own hands by poisoning Myrcella with the same kissing poison that her daughter Tyene used to taunt Bronn with in the cells. When Myrcella and Jaime shared an emotional moment, her heart rate quickened, which caused the poison to kick into effect and kill her. Whether Myrcella's betrothed Trystane was in on the plan or not remains to be seen, but I have a feeling that he won't be getting off of that boat alive.

However, could Myrcella somehow pull a Jon Snow and still be alive in the Season 6 premiere? The official HBO press release for the Season 6 premiere says, "Jon Snow is dead. Daenerys meets a strong man. Cersei sees her daughter again." Ignore the fact that these sound like children's book titles, perhaps Trystane had had the poison's anecdote on him and saved her. But, since we've seen promotional images, like the one below, of Myrcella's body on what looks to be the traditional funeral alter (creepy eye stones and all), I don't think that's the case.

Still, it's a little strange that the press release — which is so rudely definitive about Jon Snow's fate — leaves Mycella's up in the air when it seems pretty certain that she is dead as well. Is the show just trolling us? I would love for Myrcella to be alive, though I know that it's kind of a pipe dream.

For some reason, the plot from George R. R. Martin's A Song Of Ice And Fire novel series that I miss most from the show is Arianne Martell's plan for Myrcella. The Dorne princess, who does not exist on the HBO series, aimed to overthrow King Tommen with the fact that in her part of Westeros, female nobility have succession rights. Since Myrcella is older than Tommen and was married in Dorne, she and Trystane would be the rightful rulers. (Well, except for the fact that neither she nor Tommen are Robert Baratheon's natural/legitimate children and that a Targaryen is still alive — this world is complicated). It was a great feminist plotline that went by the wayside, unfortunately.

I guess we're going to war with Dorne, then. It's really a shame that Ellaria killed Myrcella. They seemed like cool people.