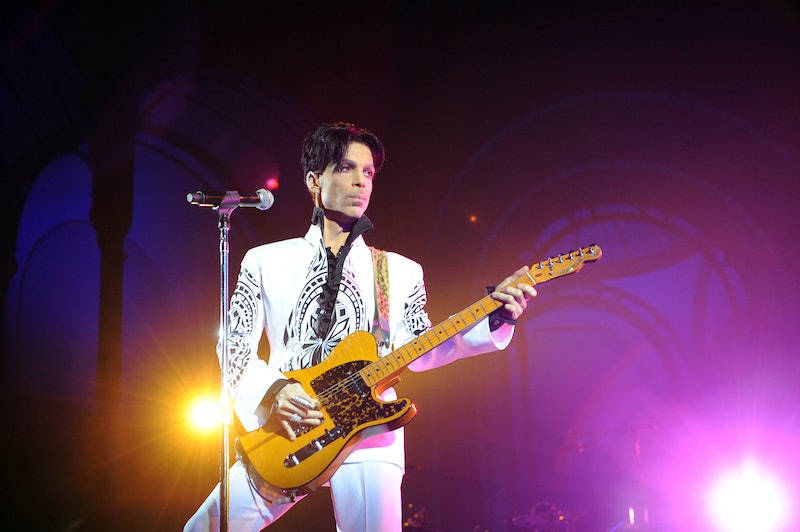 The world is in mourning for the legendary icon and musical legend Prince, who passed away today at 57 years old in his Minnesota home. Many celebrities have already posted about their mourning on social media, and it looks like the rest of us can do the same using Snapchat's purple rain filter. It seems that some Snapchat users have had it roll out, whereas others haven't, but I know I'll personally keep trying to update my phone in order to experience it first hand. (If you don't see it, try updating your Snapchat in the App Store periodically.)

Although Snapchat's filters are usually dedicated to hijinks and hilarity, this is actually a very classy way to commemorate this artist's place in our lives. Prince was always pushing the envelope, from big to small — from his life's work of revolutionizing the state of music to appearing in an episode of New Girl just because he liked the show. His music was unstoppable, his musical talent completely unmatched, and his legacy never to be forgotten. After all, who can forget a man who changed his name into a symbol and had Kesha break into his home just for a minute of his time? Not me, and hopefully not any of you.

People are taking advantage of the filter on social media, with Twitter being the first place I have seen examples of it being used. It looks like the filter allows you to overlay falling purple rain over your photos but not your videos. If I had it, you bet I would be playing his music and rocking out to the sweet sounds.

I was taken aback by how quickly Snapchat responded to the news, but a lot of people are grateful for their quick action. In an age where social media is the one driving force that connects a world in mourning, having a filter like this is important for self expression.

All you have to do is update your Snapchat, snap a picture, and then swipe left. It's a sad day, and even if it's not raining we can still make it rain purple in his name.

My major Prince memory comes from watching his music video for Black Sweat, a video that is no longer on YouTube. I thought he was powerful, sexual, and fully in control of his image. His confidence was palpable and I still think about how big of an impression it was on me. So turn up Purple Rain and enjoy the new filter tributes from around the world.