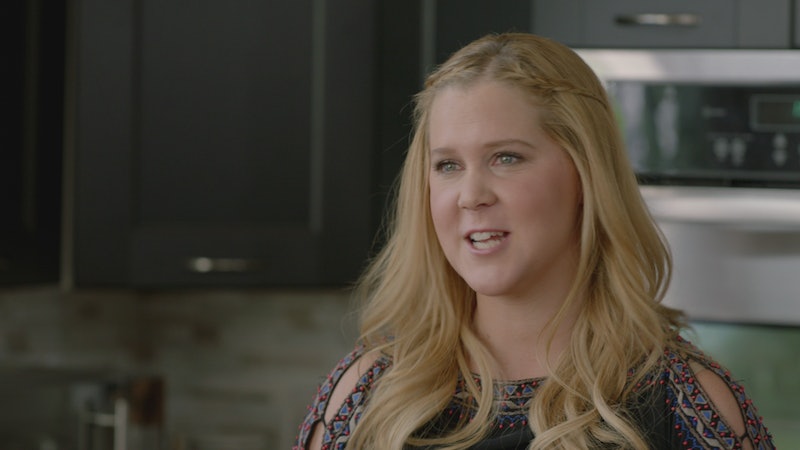 It's safe to say that none of us are especially eager for our yearly exams, but the gynecologist sketch on Inside Amy Schumer definitely wins the award for most awkward appointment ever. The sketch hilariously drives home the point that single women are frequently shamed for being sexually active, while men are often held to a far different standard. And, in the same sketch, Schumer also addresses the fact that it's taboo to discuss things like menstruation and anything pertaining to a woman's sex life.

When a team of men arrives in the room, she points out that they're not doctors — she recognizes them all from Congress. They're members of the House Women's Health Committee, so they definitely have a better understanding of medicine than a bunch of female doctors. They proceed to question Amy about the date of her last "lady curse," before shaming her for being sexually active and laughing off the idea that women should be members of the Women's Health Committee.

When Amy explains to the committee of men that she's 34, not married, and has no children, the non-doctors state, "oh, so you're a virgin!" and express shock and a whole lot of judgement when she tells them they are incorrect. She points out that two of them have secret families with their maids, prompting them to exclaim, "We're not the ones on trial here!"

Although (thankfully) there are plenty of female doctors IRL, and we can have our exams one-on-one rather than with a team of men from Congress, it often feels like, in real life, women are "on trial" for making their own decisions about their sex lives.

When Amy finally demands why there aren't any women on the Women's Health Committee, her question is met with uproarious laughter, followed by this gem of an answer: "That'd be like letting lions run the zoo!" It reinforces the message that women are often told that we don't know what's best for us and those decisions should be made by men — specifically, by certain men in Congress who attempt to limit our reproductive rights and make statements proving they have zero understanding of the female body. (You know, like those members of Congress who believe women can't get pregnant from rape.)

Schumer is often labelled as a "sex comic" because she openly discusses her sexuality and isn't ashamed to say that she's an unmarried woman who enjoys sex. (Because, you know, it's nothing to be ashamed of.) As she has frequently pointed out, plenty of male comedians constantly make jokes about sex and no one bats an eyelash or pigeonholes their specialty as "sex." This sketch further illustrates her point that there are ridiculous and infuriating double standards when it comes to this aspect of women's lives, but hopefully comics, celebrities, and activists can continue to drive home the point until people actually listen.