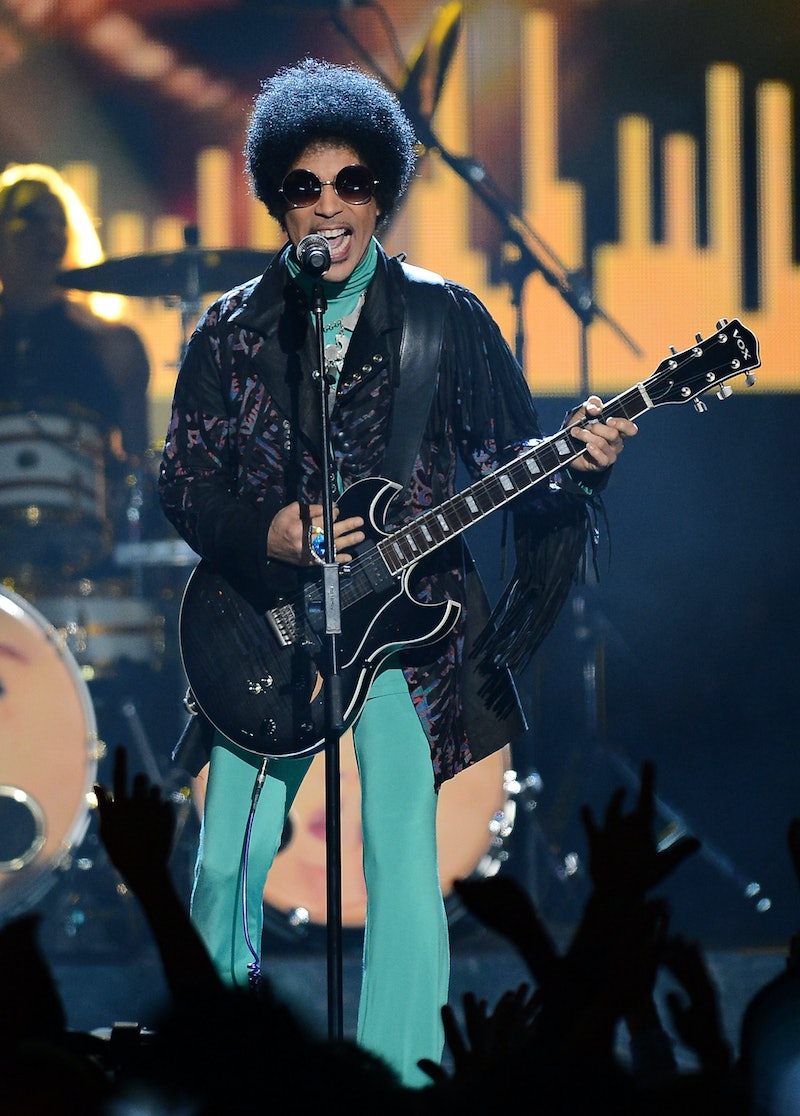 As fans continue to mourn the shocking passing of Prince, who was confirmed dead by his publicist Thursday after he was found unresponsible in an elevator in his Paisley Park home, there are a few things to remember. One important thing: While it's crucial to note that his iconic music career spanned decades and his death leaves a gap in the entertainment industry, it's also worth remembering that teaching the world to appreciate the music from artists around him — not just his own — was important to him as well. For instance, Prince adored Kanye West's track "Gold Digger," and he wanted the world to appreciate the effect it had on the music industry.

"The way he made something new with that sample was perfect,” Prince said in an interview with Smokey D. Fontaine published on Medium back in September 2015. What Prince loved about one of West's biggest hits — which was originally recreated around a Ray Charles' sample of "I Got a Woman" — he said, was West's ability to take something old and remaster it into something new. In the interview, Prince also proclaimed, "we have to make sure that young people also get to understand the masters." Considering Charles was a huge part of "Gold Digger" — and considering West has also sampled artists like Nina Simone a number of times in his tracks — it makes sense Prince would appreciate the track and West as an artist based off of this statement.

The electrifying singer, who became one of the music industry's most legendary stars during the '80s, has heard and written a lot of music in his time. After beginning his recording career at the age of 18, Prince went on to perform thousands of shows, tour the world multiple times, and sell more than 100 million records, as well as produce many. He has changed the game more than most artists can boast. “This is our job,” Prince continued in the interview. “Writers often use the word ‘prolific’ with me, but I don’t think that’s right. When you’re committed to something like we are, when you spend the amount of time on something that we do, then you’re bound to create a lot. This is what we do," he said. "Sometimes it takes me a few days to get it, if, like, I don’t understand what [the new musicians] are saying, but truth in music is undeniable…”

In another interview with New York Post in August 2015, Prince elaborated on the same thought. “There might be music that sounds like me, but what good is that? You’re essentially in the feedback loop... there’s not a lot of pop music in the mainstream that makes you feel scared, that makes you wonder what’s happening." But as a musician who found both critical and commercial success for blending R&B and rock, and also found ways to constantly update his style of music and fashion, it's easy to see why Prince was so passionate about giving credit where it was due for other artists — because his love for the music was his real story.

More like this
"Lavender Haze" Star Laith Ashley Breaks Down Filming With Taylor Swift
By Jake Viswanath
Twitter Is In Awe Of Taylor Swift’s “Lavender Haze” Music Video
By Jake Viswanath
Twitter Wants To Dance With Anne Hathaway At Paris Fashion Week
By Alyssa Lapid
Hailee Kaleem Wright's Topsy-Turvy Path From MTV To Broadway
By Samantha Leach
Get Even More From Bustle — Sign Up For The Newsletter
From hair trends to relationship advice, our daily newsletter has everything you need to sound like a person who’s on TikTok, even if you aren’t.