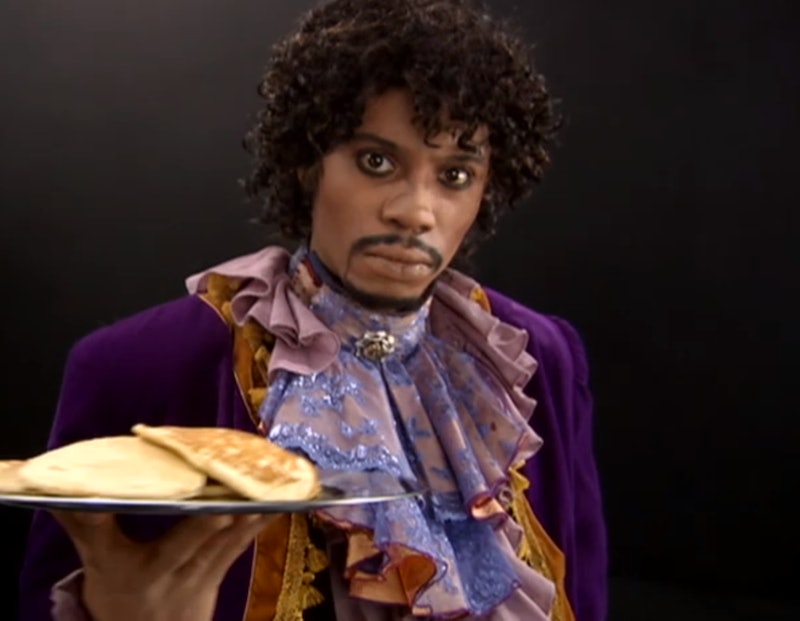 It is as the old saying goes: Laughter is the best medicine. Now, will laughter clear away the enormous cloud of sadness that looms over all of us as we mourn the death of Prince? Well, no. Not entirely. But I don’t think a few chuckles will hurt. So on that note, why don’t we tuck into one of the funniest sketches to ever grace the small screen: the Prince edition of recurring Chappelle’s Show sketch “Charlie Murphy’s True Hollywood Stories.”

In this particular chapter, actor/writer/comic Charlie Murphy remembers the time he ran into the Purple One at a nightclub. And then, we are given the gift that is a dramatic, '80s-tastic reenactment of the evening's events. In said dramatic, '80s-tastic reenactment, Dave Chappelle plays Prince. We see Prince challenge Murphy to a basketball game, Prince win the basketball game, Prince celebrate the win with a batch of pancakes, and so on.

“That’s a true story, by the way,” the actual Prince said of the Chappelle Show sketch in a 2004 radio interview (h/t MTV.com). He added that he won not because he was “that great” of a ball player, but because Murphy was “just so bad.” And as for the the victory meal? “Well, I didn’t make them,” the Academy Award-winning musician clarified. “But we had pancakes, yeah.”

There you have it, folks. The pancakes bit happened. Prince actually treated his teammates and opponents to a fresh hotcake breakfast.

It’s as that other old saying goes: Fact is stranger than fiction.