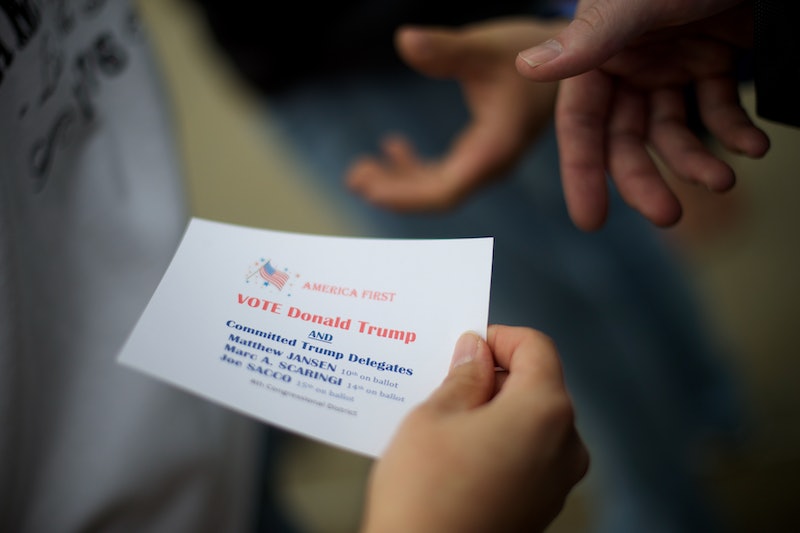 On Tuesday, the Pennsylvania primary race that matters most won't be the one that unfolds later on the news. The state's presidential primary is considered relatively meaningless — a political beauty contest, if you will — due to a few weird rules outlined by the Pennsylvania Republican Party. In fact, Pennsylvania's unusual delegate rules will significantly impact GOP candidates.

In Pennsylvania's Republican primary, voters will vote for more than just their preferred presidential candidate. Along with casting ballots for either frontrunner Donald Trump, Texas Sen. Ted Cruz or Ohio Gov. John Kasich, voters in Pennsylvania's Republican primary will also elect delegates to represent the state at the party's national convention in July. And, surprisingly, it's more important who voters select as delegates than who they choose in the presidential poll.

Pennsylvania will send a total of 71 delegates to the Republican National Convention in Cleveland. A measly 17 of those delegates are awarded to the candidate who dominates the party's statewide vote on April 26 while the remaining 54 — three from each of the state's 18 congressional districts — are set loose as unbound delegates at the convention, according to the party's official delegate selection and allocation rules for 2016.

As unbound delegates, Pennsylvania's 54 representatives aren't required to support the candidate preferred by the majority of voters in their district. Instead, they'll roam the convention floor as free agents, able to vote for the candidate of their choosing. Meaning that Trump, who most recent polls show leading in Pennsylvania could potentially "lose" the state to Cruz through a loophole even if he wins the statewide vote.

Pennsylvania sends the highest number of unbound delegates to the GOP's national convention and with the party facing a real possibility its July meeting will end in a contested convention — its first in four decades — those 54 unbound delegates could potentially make, or break, a candidate shot at being named the Republican nominee. The potential to seriously influence the GOP primary has attracted a heavy number of delegate candidates to the race this year — 162 people are gunning for the job.

But there's another twist that makes Pennsylvania's GOP primary even more interesting. Delegate candidates appear on the ballot in name only, meaning that even if a candidate has campaigned on a platform pledging to support a specific candidate at the convention that affiliation won't appear on the ballot. This might leave voters unfamiliar with the allegiance of their districts' delegate candidates, and playing "eeny, meeny, miny, moe" on primary day; or worse, skipping the section entirely as Bloomberg reported roughly 150,000 Republicans did in the state's 2012 primary.

Perhaps, however, a name-only delegate ballot won't matter much. A Pittsburgh Tribune-Review survey of 127 of the 162 delegate candidates reported that 67 said they'd cast at least their first ballot at the convention for the candidate who won their district. Although, as Slate's Jim Newell points out, there's no way (or rule) to guarantee an unbound delegate sticks to that commitment at the convention. Furthermore, both Cruz and Kasich's campaigns are working to meet with delegate candidates to sway their vote and offer campaign support to those who've already "pledged" to support them.

It's reasonable to assume that Tuesday night will end with news outlets reporting the results of Pennsylvania's statewide vote, but it will likely be at least a week before the state's Department of State posts congressional district results, Allentown newspaper The Morning Call reported. Moreover, the Republican presidential candidates won't likely begin pursuing Pennsylvania's unbound delegates in earnest until after the dust of the primary has fully settled. Meaning it might not be clear who really won Pennsylvania's Republican primary until the convention rolls around.