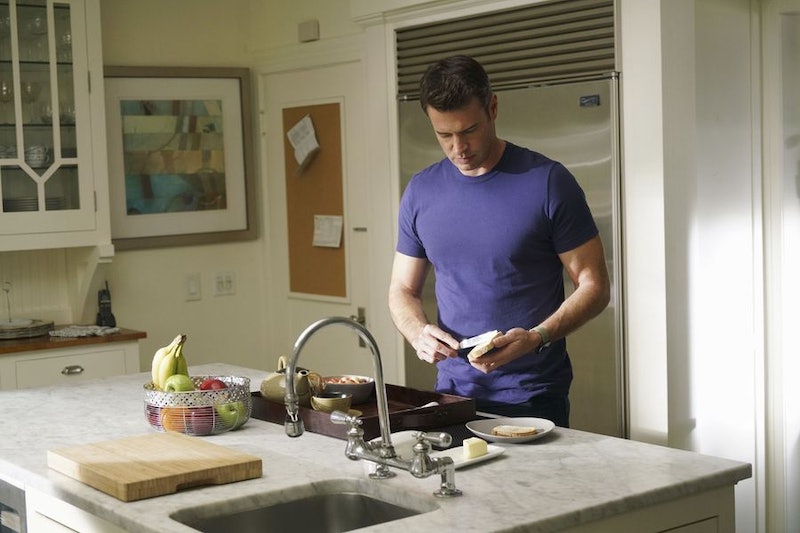 Often, when Captain Jake Ballard graces my television during an episode of Scandal, I'm not thinking too much — I'm just glad he's there to look at (and for the record, I totally think he's a better match for Olivia than Fitz will ever be). But I've always wondered one thing: Where did he come from, exactly? If that's a question you've wanted an answer to, too, you're in luck, because this week's episode tells all. In a series of flashbacks on Scandal , Jake's past is revealed, and it's clear that his horrifying childhood led him directly into Rowan's clutches for the rest of his life.

As it turns out, Jake (real name: Pete Harris) had a really, really terrible home life. His father was abusive, and while he regularly raped Jake's little sister, he would also hit his mother anytime she told him to stop. And for all those years, Jake did nothing about it... until he met Rowan. As an adult, Jake joined the military, and ended up getting discharged after a drunken fight got totally out of hand. But Rowan swooped down to "rescue" him, invite him to join B-613, and he'd get a new identity and a free pass for life — literally a get out of jail free card.

Jake was hesitant, but he went through the training. By the way, in the event that B-613 is actually real, do not ever join. As part of the process, Jake was taught to fight, was left alone for hours on end, got beaten up by Charlie, and went through hours of emotional trauma at the hands of Papa Pope. The most heartbreaking part was when Jake had to sit as Rowan yelled at him about not being strong enough to keep his father from hurting his sister, so it makes his ultimate choice at the end that much more understandable that, when training is over, the first thing he does is drive to his childhood home and kill his dad.

After going through stuff like that, it makes total sense that a man promising him freedom, security, and an opportunity to feel like he's doing something meaningful with his life would be appealing to Jake. But that makes it even sadder when he follows along with Rowan's plan to marry Vanessa in order to become the next vice president of the United States, because once again, he's trapped in a life he didn't ask for.

But even though Jake is still in Rowan's grasp now, I have hope that one day he'll be able to be free of it. Rowan's reign has to end sometime, right?