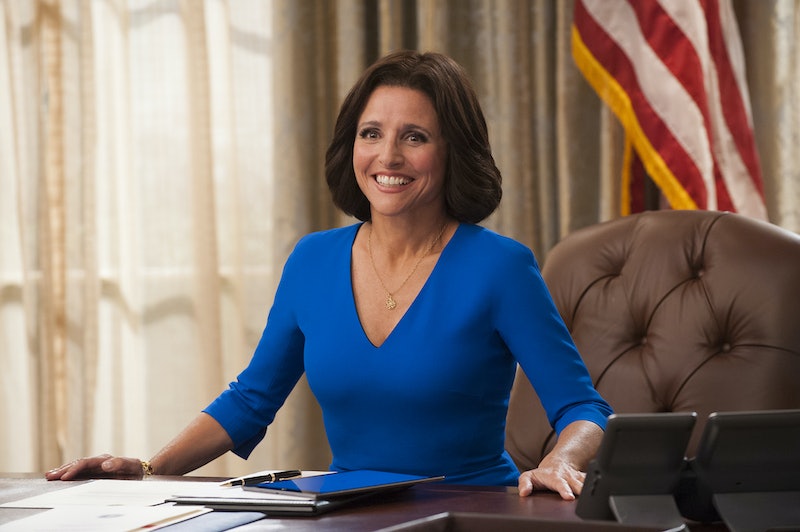 Selina Meyer is one VP-turned-President who just cannot catch a break. When the Veep Season 5 premiere kicks off, we're quickly reminded that, although Selina won the popular vote, there is an unprecedented tie in the Electoral College. The whole situation has Selina in a worse mood than usual as she wonders aloud, "didn't those Founding F*****rs ever hear of an odd number?" (It's a fair question.) The emotional roller coaster takes a toll on her in more ways than one and Selina's stress pimple on Veep quickly turns into a major issue — and it illustrates the sexist scrutiny that women frequently face when it comes to their physical appearances.

Everyone has something to say about the Prez's facial zit. The media refers to the electoral chaos as a "blotch on the face of America," which Selina and Ben concur is an underhanded jab about her appearance. A Twitter account called POTUS (Pimple of the United States) already has 220,000 followers — more than Selina herself. After Gary unsuccessfully tries a series of hilariously ineffective remedies, Selina summons a doctor and excuses herself from her staff by telling them that "this pimple isn't getting any smaller — kind of like the national debt." Yes, the Dow has plunged (partially due to panic over the election), but the President needs to focus on her face in order to be taken seriously. The doctor assures her that he has an effective procedure to get rid of the offending pimple, but Selina calls it off after learning that she wouldn't be able to wear make-up for 48 hours after the removal.

Selina is not meant to be a very likable character and it would be easy to dismiss this as an instance of her being vain or having the wrong priorities. However, this is instead a realistic example of Selina being painfully aware that, as a female politician, she would be harshly judged for making any public appearances sans makeup. In the middle of a tied election, it's something she really can't afford. Although Veep is a comedy, it's often all-too-realistic — and we simply need to watch the news or look at social media for definitive proof.

In 2012, USA Today reported that Secretary of State Hillary Clinton had made national news when she attended a conference in Bangladesh wearing glasses and no cosmetics. The following year, BloombergView published an article criticizing Clinton's extensive travel to locations all over the world. (Which, you know, sort of comes with the territory of being Secretary of State.) The author praised her work ethic and dedication before directly stating that, as a result of her many business trips, "Clinton looks awful and has looked worse and worse for years."

It's really a no-win situation — female politicians are publicly shamed when they don't look 100 percent "put-together," so they're forced to waste time dealing with ridiculous issues like a zit. In the Veep premiere, it's implied that this cuts into time Selina needs to spend on important, pressing issues like the stock market, an upcoming racial symposium, and the Nevada recount.

Female politicians are by no means the only public figures whose appearances are subject to sexist scrutiny. Tabloids love to gleefully feature photos of stars without makeup, as though it's breaking news that celebrities look a little different when they're out running errands or grabbing coffee. And, these features are typically framed in a way that implies even the most "beautiful" celebrities are unattractive when they dare step outside without applying make-up.

Those of us who are outside of the public eye feel the pressure, too. Last year, The Atlantic reported that women who wear make-up earn higher salaries and are treated better in the workplace. The outlet noted:

Makeup, in short, is a norm, and nothing ruins a first impression like a norm violation. Some women contend they only wear makeup to “boost their confidence,” but the reason they feel less confident when they don’t wear it is that there’s an expectation they will.

To be clear, there's absolutely nothing wrong with loving make-up or dressing up — but what is wrong is being asked if we're "tired" or "sick" on the days that we go make-up free, or feeling pressured to look a certain way at the office because we think it's a necessity in order to get ahead. When I was new to the workforce, I legitimately burst into tears when, the evening before a major conference, my optometrist informed me that I had developed ulcers in both my corneas and I would need to wear glasses instead of contacts for the next month. (I was convinced that I looked absolutely terrible in glasses.) At the time, I chalked it up to my own sensitivity and insecurity — since then, I've realized the unfortunate truth that my reaction wasn't as unusual as I thought.

Most of us can't relate to many of Selina's Presidential problems — but her struggle in the Season 5 premiere is sadly and painfully relatable for many women, regardless of whether or not we're in the public eye.

More like this
'The Undeclared War' Took Inspiration From This Gavin & Stacey Location
By Maxine Harrison
Eurovision 2023 *Might* Be Held In The UK
By Sam Ramsden and Rachel Mantock
How A Political Staffer’s Death Became The Center Of Alt-Right Conspiracy Theories
By Gretchen Smail
Everything We Know About When To Expect Money Heist: Korea Part 2
By Kadin Burnett
Get Even More From Bustle — Sign Up For The Newsletter