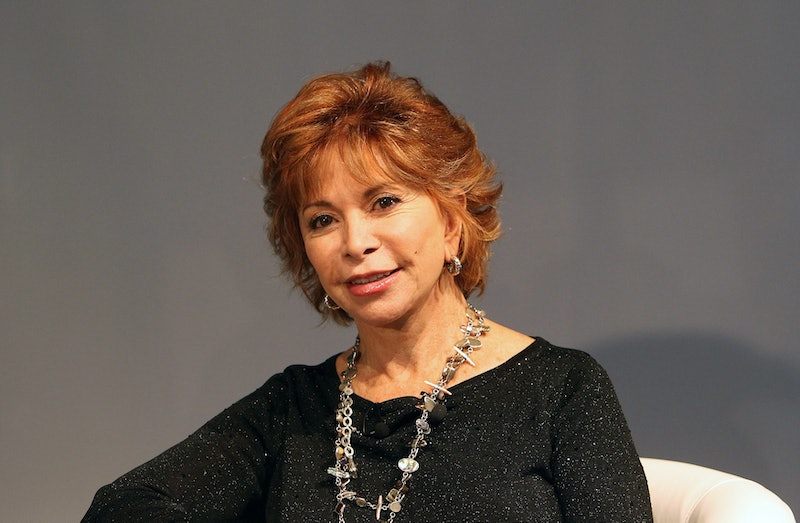 At some point, every aspiring novelist quits her notebook in frustration and wonders, how do writers write bestsellers? Even more exasperation ensues when she learns that there isn't a universal answer to that question. The worst part? Most famous authors maintain odd routines and rituals that will only work for them.

For example, Isabel Allende begins writing each novel on the same date: January 8. Before you mark that day on your calendar, however, you should know that there's no mysticism in it for anyone but Allende. The Chilean-American author started writing her 1982 debut, The House of the Spirits , on that date, and has kept up the habit throughout the ensuing decades, although her reasons for doing so have changed. She tells the Harvard Business Review:

At the beginning it was superstition, because the first book had been so lucky. Now it’s just discipline. My life is busy, so I need to save some months of the year to be in a retreat. I need time and silence, or I will never be able to write. Having a start date is good for me and everybody around me. They know that on January 8, I’m not available anymore.

If Allende's writing secret sounds bizarre to you, trust me: it's adorably whimsical compared to the habits the following authors drummed up to write their bestsellers. Check out their odd rituals below, and share your own weird writing tricks on Twitter.

A lot of writers swear that their workout routines are essential to their success. Drop Dead Healthy author J.A. Jacobs writes while walking on a treadmill. Poet Wallace Stevens also wrote while walking, as does Maira Kalman.

Walking pales in comparison to Kurt Vonnegut's preferred fitness habits. The Slaughterhouse-Five writer not only walked and swam every morning, but also claimed to " do pushups and sit ups all the time." Haruki Murakami takes things a step or three further with his routine, which includes a 10-kilometer run, 1500-meter swim, or both, each day.

Franz Kafka was a fan of this method, which he maintained until his death from tuberculosis at the age of 40. As Zadie Smith describes it in The New York Review of Books :

At the Assicurazioni Generali, Kafka despaired of his twelve-hour shifts that left no time for writing; two years later, promoted to the position of chief clerk at the Workers' Accident Insurance Institute, he was now on the one-shift system, 8:30 AM until 2:30 PM. And then what? Lunch until 3:30, then sleep until 7:30, then exercises, then a family dinner. After which he started work around 11 PM (as [ The Tremendous World I Have Inside My Head author Louis] Begley points out, the letter- and diary-writing took up at least an hour a day, and more usually two), and then "depending on my strength, inclination, and luck, until one, two, or three o'clock, once even till six in the morning." Then "every imaginable effort to go to sleep," as he fitfully rested before leaving to go to the office once more. This routine left him permanently on the verge of collapse.

3. Pick a Word and Write About It.

When faced with a boring and potentially disastrous task, such as describing a room, A Clockwork Orange author Anthony Burgess liked to pick up a dictionary and use the words on one page to complete his task. Although he thought it was a tip of particular use to newbie writers, Burgess admitted that his trick had ended up in his own work: "I even did it in a novel I wrote called MF . There’s a description of a hotel vestibule whose properties are derived from Page 167 in R.J. Wilkinson’s Malay-English Dictionary. Nobody has noticed."

Thomas Wolfe wrote while leaning over his refrigerator. Standing to write was part and parcel to the routines of "[Ernest] Hemingway, Charles Dickens, Virginia Woolf, Lewis Carroll, and Philip Roth," as well.

A disclaimer: do not take this as encouragement to do drugs. Remember what I said about techniques only working for the person who developed them? Keep that in mind, and don't do drugs.

Alcoholic writers have been around for ages, but the idea that drug use and good literature are linked might just date back to the Beat Generation. In Naked Lunch , William S. Burroughs discussed living and writing under the influence, although he credited killing his wife with launching his career as a writer.

Later, Gonzo journalist Hunter S. Thompson would pick up the drug-writing torch. The Fear and Loathing in Las Vegas author left behind a legacy of daily substance abuse when he died in 2005.

A somewhat unexpected member of the writing-while-high community was poet W.H. Auden, who alternated Benzadrine and Seconal to balance his wake/sleep pattern. It was a dangerous mix, as Auden himself admitted, one that could "injure the cook," so to speak.

Champion among these, however, is 18th century German poet and philosopher Friedrich Schiller, whose friend, Johann Wolfgang von Goethe, discovered Schiller's strange muse when he paid him a visit. Schiller left apples to spoil in his desk drawer, and claimed he "could not live or work without" their smell.

Stephen King once fueled his writing with drugs and alcohol, so much so that he can't remember writing Cujo . Now clean and sober, King says in On Writing , "[t]he idea that creative endeavor and mind-altering substances are entwined is one of the great pop-intellectual myths of our time." Drugs and alcohol don't make you a better writer, folks. Dedication does.

Maya Angelou rented a hotel room in her hometown on a monthly basis. She'd go in at the crack of dawn, write until the early afternoon, then take her work home to look it over. Angelou asked the management not to enter her room, except to remove the paintings and other decorations. Instead, to occupy herself while she brainstormed, Angelou kept crossword puzzles and a deck of playing cards handy.

It seems that just as many authors prefer to write lying down as standing up. According to Lifehack, "Mark Twain, George Orwell, Edith Wharton, ... and Marcel Proust" were all known to write while lying down. Truman Capote was, as well, but that's hardly the strangest thing about his routine.

Capote was certainly a persnickety writer. Not only did he claim to be "a completely horizontal author" and unable to "think unless [he was] lying down," Capote held fast to more superstitions than most people could keep up with. He "wouldn’t begin or end a piece of work on a Friday, would change hotel rooms if the room phone number involved the number 13, and never left more than three cigarette butts in his ashtray, tucking the extra ones into his coat pocket."

Both John Cheever and Victor Hugo thought that writing in various sates of undress was beneficial. Cheever may have written in his underwear as a practicality, given that he "had but one suit at the time," but Hugo had other motives. The Les Misérables author gave himself only a few months to write The Hunchback of Notre-Dame . In order to ensure his success, Hugo had his valet remove all of his clothes from the house. With "nothing to wear except a large gray shawl," the author was forced to meet his deadline.

Travel writing is one thing, but these authors did something else entirely. Sir Walter Scott wrote on horseback, of all places. Gertrude Stein did her best writing while riding along with Alice B. Toklas as she ran errands. Eudora Welty wrote snippets on long drives to see her mother, and Joseph Heller found much inspiration — including the last line of Catch-22 — while riding the bus.