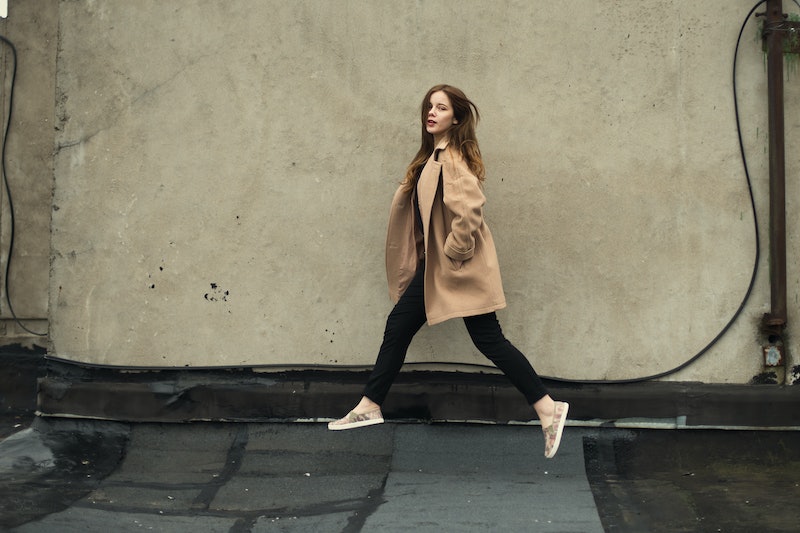 I don't know who passed down this particular gene to me, but I've always been an overachiever. The first time I didn't get an A on an exam at school, I hid the test underneath my pillow and didn't tell a soul. I was so devastated about it I was on the verge of tears for five days straight, but I wouldn't let myself cry — because that would mean I'd have to tell someone about my big, dark secret. I think I was in the third grade.

This was just the start of many stressful years ahead, years full of checklists so detailed they would put the White House administration to shame, countless extracurricular activities, and Hermione-like classroom encounters that made me the butt of everyone's joke. I had to do it all, and I had to do it perfectly. Luckily, after a lot of therapy and many hours of yoga, I've since chilled the eff out, and the little overachiever in me isn't in charge as much as she used to be. I don't think I'll ever be able to fully escape her, though.

Psychologist Adrian Fuhrman wrote for Psychology Today about the consequences of being a perfectionist. He says the kind of perfectionism you see in overachievers certainly makes them work hard and dream big, but he says psychologists often see perfectionists as "vulnerable to distress, often haunted by a chronic sense of failure." Yeah, that sounds about right. Strangely enough, the more a person tries to do with their life, the more likely they are to procrastinate and make poor decisions. That may be hard to stomach if you know you fall into this category, but wanting to do everything the best you possibly can isn't all bad. There's some good stuff in there, too.

Here are seven ways growing up an overachiever affects you.

1. You Take Failure Way Harder Than Most People

You know deep down inside that things don't always pan out for you the way you'd like them to, but you have a hard time admitting that to yourself. So when you hear "no" or learn that you didn't get something you've been working towards, you don't take it very well. It's not like you throw your hands in the air and temporarily give up — no, overachievers have far too much on their plate to do that — but you definitely don't take it as gracefully as your friend would.

John Eliot, Ph.D. clinical professor in human performance at Texas A&M University and author of Overachievement, told the Huffington Post that failure, to overachievers, is a poor reflection of themselves, rather than a natural part of life that everyone deals with. This makes the disappointment pretty heavy for you, even if you don't show it on the outside.

2. ... And You're Hesitant To Speak Openly About Your Failures To People In Your Life

Hence my hiding that stupid history test under my pillow in elementary school. I couldn't bring myself to face my parents with the news, even though they wouldn't have given two sh*ts about it. That's the thing about overachievers: even if you won't judge us for our failures, we judge ourselves hard enough for the both of us and think this failure will make you think less of us.

One crucial part of being an overachiever as a kid is that we convince ourselves that our parents and other adults hold us to the highest standards. Sometimes that's the case, but a lot of the times it's just us putting unnecessary pressure on ourselves. This characteristic follows us into adulthood, and later on, we don't want to tell our friends that we didn't get the job we interviewed for.

3. You're Hyper-Focused On The Future — Even If Good Things Are Happening Right Now

When something great happens, before you can even celebrate, your mind races to how you can take the next step forward in your career. For example, when I was a teenager, I was accepted into a prestigious nationwide piano competition that only accepted 11 students. My mom wanted to take me out to celebrate, but I wanted to stay home and practice more to get myself ready for world domination. To me, that was just ambition. However, some would say it's an inability to be satisfied with what you've currently got.

This quality can be a positive one if you choose to harness it in a good way. If you let it consume you to where your brain is constantly fixed on the future, though, it will ruin you. Looking too much ahead strips you of the chance to enjoy what's happening right now. So when you get that promotion, go out, celebrate, and forget about that 10 year plan you've got brewing in the back of your mind.

4. You're More Likely To Do Work For Free

You're the first one to line up for those prestigious internships — you know, the ones that look fantastic on resumes but pay zero dollars an hour. This is a typical move by overachievers during their college and young adult years, and it can continue on throughout the rest of their adult years.

It's definitely a trait that's followed me. I've had to sit myself down and promise myself that I was no longer going to accept every single unpaid writing gig. My brain still considers jumping on those opportunities because I'm convinced that the more work I have, the better. While there are times when it pays to work for free, you've got to be able to determine when it's useful to your future and when it's not.

5. You Go Above And Beyond For Your Friends And Family

Caring too much has its upsides. You would never want your loved ones to think that you don't consider them a priority, so your to-do list always includes activities with them. Overachievers may seem primarily outcome driven, but many of us develop a strong understanding of personal relationships from a young age. We know it's just as important to have mentors in our life as it is to have friends and family we get along with.

As a result, we'll pencil you in when you need us. During finals week during one semester at college, my best friend needed help cooking for a fundraiser event she had been planning for months because the kitchen staff bailed at the last second. There was no way I was about to see this job done poorly. I dropped everything to cook with her for several hours that afternoon — and then I headed straight to the library where I stayed up for a few days straight studying for my exams.

6. You Really Know Your Strengths & Weaknesses

You may not realize it, but while you're busy as a kid earning one award after the next, you learn a lot about yourself. You figure out at a young age what you're good at, how your brain functions, and which tasks present you with the most challenges. By the time you reach adulthood you don't need to do as much soul searching, which allows you to be a really efficient employee.

Penelope Trunk, successful entrepreneur and blogger, writes on her website that overachievers are really good at answering the most dreaded question in interviews, "What's your biggest weakness?" Not because they're necessarily too hard on themselves, but because they've accomplished so much that they know who they are by now. They can talk about their weaknesses in useful ways.

7. It Feels Weird For You To Relax & Have Nothing To Do

We're an anxious bunch, us overachievers. There was hardly a moment in our childhood when we were kicking back and chilling. Old habits die hard. To this day, I wrestle with some pretty serious guilt whenever I find myself on the weekends with no plans. I have to keep reminding myself that it's OK to not do anything for a while. Overachievers are the ones who need to chill out the most, being so tightly wound and all. So the next time you're unwinding with your friends and you start to feel antsy, try your best to let go of the anxiety. Taking time for yourself is just as important as taking over the world.

More like this
When Your Partner Has ADHD (And You Don’t)
By Camille Beredjick
Are Quality Time & Words Of Affirmation Love Languages Compatible?
By Lexi Inks
6 Abortion Advocates To Follow On TikTok
By Sara Youngblood Gregory
Your Guide To July’s Full Buck Moon
By Brittany Beringer
Get Even More From Bustle — Sign Up For The Newsletter