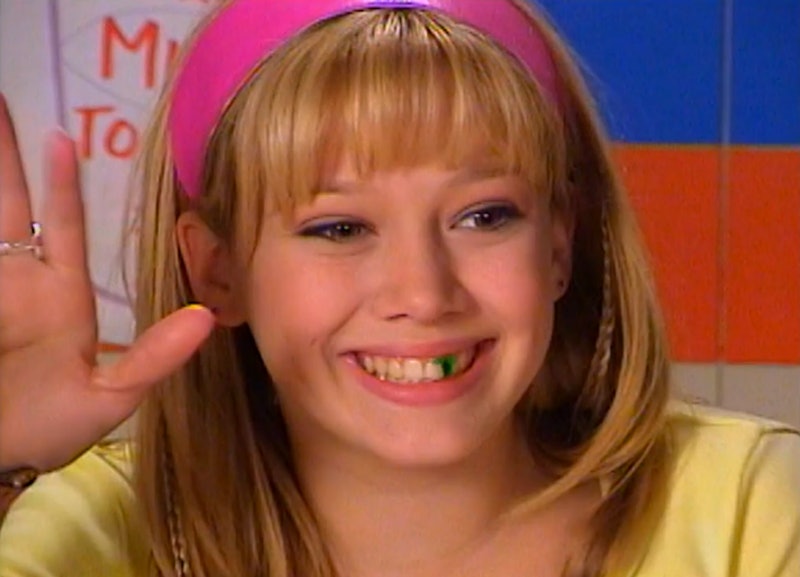 No one said that your middle school years would be easy. Had someone said that, they would instantly be branded a liar, or, perhaps, an alien species who never had to deal with mean girls, cliques, or earth science. If there's one person that completely understands your struggle, is the titular middle schooler from the Disney Channel sitcom Lizzie McGuire. While we might not all get our very own cartoon version of ourselves to make snarky comments behind the notorious Mean Girl's back, Lizzie totally understood what it was like to feel frozen in front of crush, left behind when our friends hung out with a new group, and completely and utterly embarrassed by our parents who didn't seem to understand any of the above. Lizzie may not have been the coolest girl in middle school, but she certainly was one of the realest.

Of course, like any real middle schooler, Lizzie often made choices that were downright questionable. (Many of these choices involved her crimping iron, but given that this was the early '00s, I think we can let that one slide.) Looking back, the life lessons we learned through Lizzie's eyes may have not have been exactly what we needed to know during our formative years, but hey — no one said that tweens had to understand everything. Here are the life lessons we learned from Lizzie.

1. Breaking Into A Music Video Shoot Won't Get You Arrested, But It Will Get You Kissed By Your Celeb Crush

When Lizzie sneaks onto Aaron Carter's music video set, she doesn't get hauled away by security. Instead, she gets to be face to face with her ultimate celebrity crush (Hilary Duff's one-time real boyfriend) and even gets a kiss from the silver jacket donning superstar. Do not try this with Harry Styles, 2016 fangirls. (You could, potentially, still try this with Carter himself, though.)

Lizzie's job at the Digital Bean proved to be soul-crushing, like many part-time jobs that involve waiting on people like Kate Sanders. However, I'm not so sure that I got behind Lizzie's decision to dip out of the Digital Bean when the going got rough — yeah, it's totally fine to do that in middle school, but ditching your job because it was getting too job-y is typically frowned upon in the greater scheme of life.

Just in case anyone was confused, this is not clever, or funny.

4. Food Fights Are Fun, Silly And Not At All Destructive

Just once, I would really love it for a tween show to depict food fights as the gross, wasteful experience that they are. Lizzie McGuire certainly made them seem like one of the better parts of middle school.

5. A Bra Is The Symbol Of Adult And Womanhood

At the time, Lizzie's rebellion seemed like the ultimate grown-up move. If only Lizzie knew that a bra not only did not make a woman, but that a woman could actively choose not to wear a bra if she so wanted. Pretty sure an adult Lizzie relishes the moment at the end of the day when she can finally remove the garment she once screamed at her mom to buy.

6. No Hairstyle Is Complete Without Accessories

The headband and scrunchie budget on Lizzie McGuire was quite possibly bigger than Duff's salary.

7. Impersonating An Italian Pop Star Can Only Lead To Adventure

The Lizzie McGuire Movie is still everything to me, but you have to admit that the premise — Lizzie impersonating a runaway pop star who just happens to be her doppelgänger — could have caused a whole lot of problems. I mean, someone had to sue Lizzie for fraud, right?

8. A Guy's Popularity Is Directly Correlated To His Hair

Ethan was certainly cute, but his brain was basically mush. Fortunately, the shaggy covering over said brain — his mop of glorious early '00s hair — made up for it. Sigh. If only Lizzie knew that Gordo was the catch to end all catches earlier.

9. Only The Most Troublesome People Have Facial Piercings

Remember when Lizzie started hanging out with a "tough girl" and changed her image — and personality — entirely? It was like her clip-in nose ring gave her serious bad girl super powers, and in the worst way. (Blue streaks, on the other hand? Totally cool.)

10. You Can Take Infinite Time Off School

Lizzie and her BFF Miranda were inseparable for most of the show, which is why it was more than a little jarring when Miranda (played by actress Lalaine) dipped out of the last season for six episodes. The reasons for her absence included a trip to Mexico, sick day, and a visit to her aunt's house — but I'm pretty sure no school would allow for a student to miss that much class for less-than-acceptable reasons. (Also, no one would choose to go to a water park over a class trip to Italy, as Miranda did prior to The Lizzie McGuire Movie.)

11. Having A Cartoon Character Living Inside Your Head Is Totally Normal

It's definitely not a sign that your house has a gas leak in this universe.

We love you Lizzie, but your lessons? Fortunately, we all learned a lot more since our middle school days.