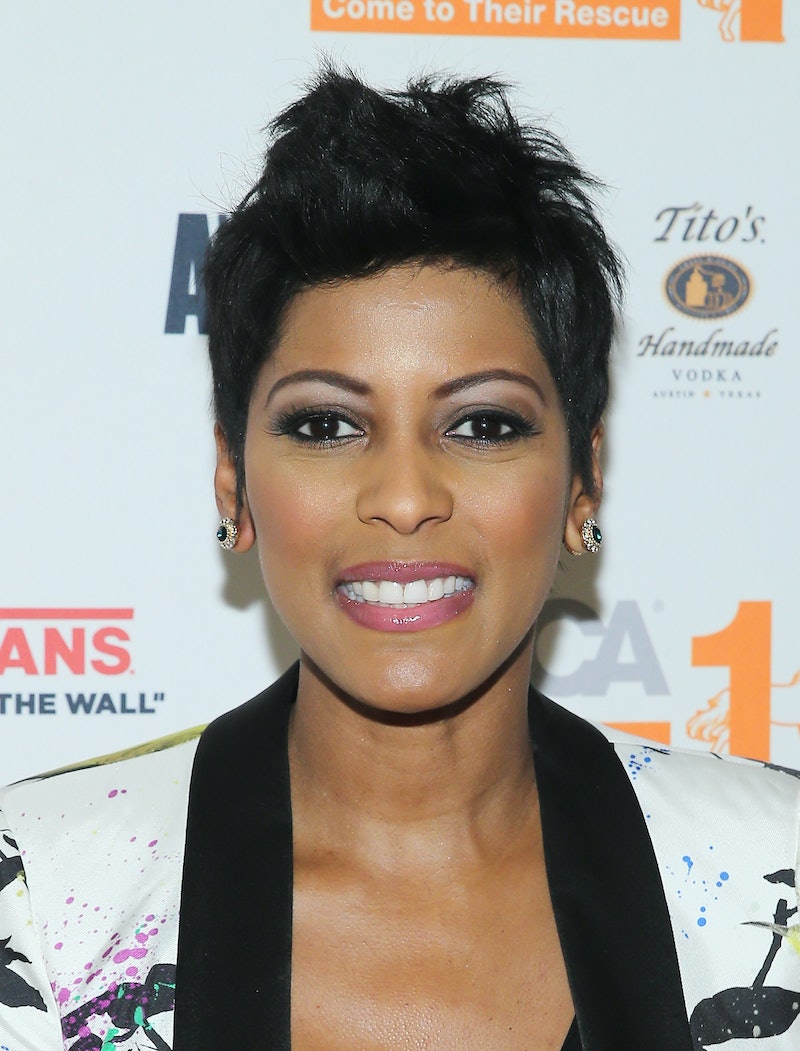 In the immediate wake of news that iconic musician Prince had died on Thursday, fans and celebrities alike flooded Twitter with messages of sorrow and shock that the singer's life had been tragically cut short at the age of 57. Of course, it stands to reason that those most affected by the news were Prince's closest family members and friends, famous and not famous, and those who were lucky enough to know him personally. Many friends of Prince have since come forward to share their fond memories of the music legend, and one of them just so happens to be a very famous face on NBC. Prince was apparently very good friends with Tamron Hall. Who knew, right?

As soon as news broke that Prince had died, the news anchor sent a message on Twitter saying she'd "lost one of her best friends today," with lyrics to "Nothing Compares 2 U," the Sinead O'Connor song Prince wrote. She also spoke with MSNBC and said that Prince "assured her he was OK" on Saturday, then on Monday, the pair exchanged emails after she sent him a message about a restaurant she was in playing one of his songs. "I talked about how he was everywhere I go. It was a sweet moment and I had no idea it would be our last time talking. I never imagined it," she said.

She also spoke about Prince's response, his last message to her: "He wrote back, 'But nowhere at the same time...You're thinking of me because I'm thinking of you too.' And I never imagined again that would be my last correspondence with him."

Hall revealed that it was the singer himself who initiated their friendship years ago. She said,

Prince reached out to me years ago, and we just bonded over his interest in news, his interest in family ... It just turned into what was one of the most incredible relationships of my life ... I'm a lucky person that I have had a friend like this.

The host said that she and Prince talked all the time. "The only other person I spoke with more than Prince is my mother. This was the person I communicate with more than anyone," she said.

There are just great things about him I wish I could tell people, but he wanted them to stay private. He didn't want people to know all of the ways he helped other people. He did it as this silent angel including how he helped me, in my life, on many occasions. I'm sorry for the world losing his gift, but he's not gone. He is not gone.

Prince was so smitten with Hall that he wrote a song in her honor in late 2015, called "If Eye Could Get UR Attention" and even featured a selfie of her as the cover art for the single. She said that she sent him selfies on the regular... you know, no big deal. Don't we all send selfies to music icons?

As if that's not lovely enough, Prince even used his musical talents to give Hall a theme song for her show on MSNBC, NewsNation with Tamron Hall, in 2013. At the time, Hall said on Today,

Prince is a news junkie. He is incredible. He is the most thoughtful person. He is engaged with what’s going on in the world, and so it evolved into this amazing opportunity for me to have this song. It blew me away when I got the email. He's the coolest person on earth.

Hall's NBC family were adorably shocked when Hall surprised them in September 2015 by having Prince call into Today, all the while wearing a perfectly purple dress in his honor. Hall's cohosts Al Roker, Natalie Morales, and Willie Geist, were noticeably shocked that the musician was on the phone, and Hall nonchalantly said, "Prince and I, if you don't know already, are very close. We talk pretty much every day."

Prince meant so much to so many people across the world, but it's these stories of his friendships that make his legacy all the more special.