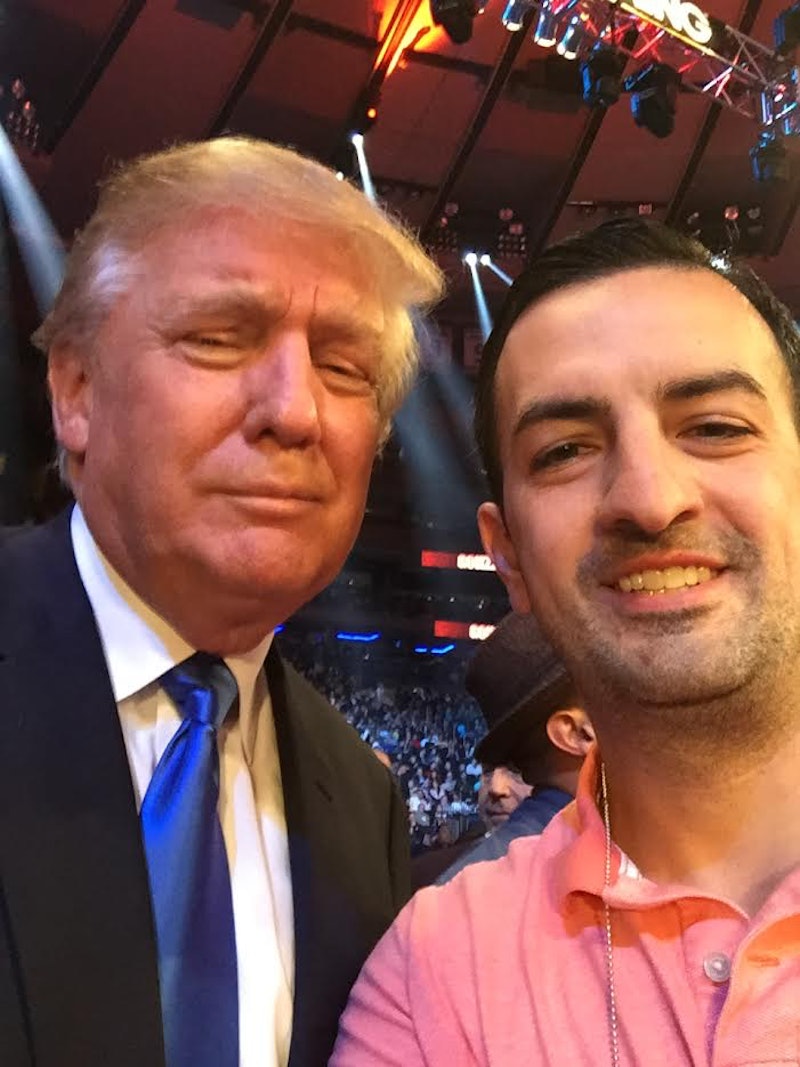 True life: I'm a political junkie. No, that's not the title of the most boring MTV episode ever but it is my life. Quite simply, I love politics and political campaigns. I often view the general election as my World Cup or Olympics. It comes along every four years and when it gets here, I'm addicted. I love the drama, I love the theatrics, and I love the rat race. So, of course, it's been fascinating to watch the Republican campaigns overall and the campaign of Donald J. Trump in particular.

Even if I weren't savoring every minute of coverage, it would be pretty hard to avoid.

Trump is a talented man but his media savvy is unparalleled. He knows what to say, when to say it and who to say it to. He's in the spotlight all day (and all night on Twitter). But what would happen if someone who loves and follows politics (I wrote for the Fox News Channel for four years) couldn't follow politics for one week? Or, more specifically, what if that person couldn't follow THE story of the 2016 season — namely, Mr. Trump? What would happen? How would it feel? And in this media-saturated environment we live in, could it even be done?

Well, I tried to go a full week without reading or hearing about the Donald. The rules I've established for myself are simple. Online, I won't click on anything with "Trump" in the headline. If there's a news item on TV, I'll change the channel. If there's a headline in the newspaper, I'll turn the page, and if there's something on the radio, I'll either flip the switch or hum loud enough to drown it out (I like the latter option). But since I actually don't live under a rock and do surf the web, watch TV, read newspapers and listen to the radio, this is unlikely to be fun... or easy.

Day 1: Trump Deprivation Is Harder Than I Thought

This is already more difficult than I anticipated.

I usually begin my day by browsing Facebook, Instagram and Twitter and — if something interests me — reading whatever is posted. You don't appreciate how much Trump-infused media there is, however, until you actively start ignoring it. I intuitively clicked the link to an article about him despite the headline being something he said countless times before, just because it was there. Fortunately I closed the window before it fully loaded. I quickly scrolled past a photo his campaign posted to his Instagram account (this was the easiest of the three) but Twitter was particularly troublesome. Being the political addict I am, almost all of my feed was either Trump, Trump-related or Trump-bashing. Within 30 seconds I realized that this would not be a forum I could utilize much, if at all, during my Donald Detox.

Ironically, despite the sheer ridiculousness of many of Trump's comments and positions, I was the one feeling ridiculous today. I wanted to know what he was saying or doing, if only so I could be informed when someone inevitably raises the issue. This bothered me more than it probably should.

In an effort to avoid Trump coverage, I watched Wheel of Fortune tonight for the first time since I was seven.

I couldn't watch the news or even one of those ridiculous entertainment shows because of the likelihood that the Donald would appear in some form or fashion. So, alas, there I was eating dinner and buying a vowel.

Politico headline: "Megyn Kelly meets with Donald Trump." Ugh, can't I just click on this one link, this one time, and then resume my detox? No? Okay, moving on then...

As the days and hours ticked on by I was coming to certain realizations about (attempting to) cleanse all articles, reports, tweets, and news segments about the Donald from my life. One: I was feeling pretty unintelligent by not following the goings on of Mr. Trump (ironic, I know).

I wasn't aware of the latest news and events, so I couldn't really talk or analyze the political scene. And if I couldn't do that, then I couldn't have a viable opinion. So, I was bored, too.

Two: I've noticed that I couldn't really follow any of the other campaigns. On an almost daily basis, Ted Cruz, Hillary Clinton and/or Bernie Sanders are reacting to Trump (sorry I forgot to mention you, John Kasich; I know you're still here — sort of).

I realized there's very little substance to glean when it's all Trump all the time (even when Democrats are talking). Whether you want to Make America Great Again or only want to Feel The Bern, you have to admit that it's not good when all the talk is about Trump. When you're in the bubble, this problem can sometimes go unnoticed, but this one week getaway only clarifies a troubling trend. I was starting to get depressed...

It was a slow news day. Nothing trickled in, and at this point, I didn't go looking for it. No nightly news tonight, of course, but no Wheel of Fortune either (thankfully). Instead, in an effort to avoid Trump and not have to see or listen to Pat Sajak, I re-watched The Shawshank Redemption for the umpteenth time. Man, I really love Andy and Red. That's a presidential ticket I can get behind!

"Did you hear the New York Post endorsed Trump," my co-worker asked me when I walked into my office this morning. No, I actually hadn't but I can't say I'm surprised. The New York Post leans right and Donald Trump leans right (this week) so that seemed about... right. Even when I avoided the news, web and print publications, and social media, I was still getting Trump news. This is frustrating on many levels, not least of which is I'd like to know the reasoning behind the endorsement. I made a mental note to add this to my reading post-detox and tried to move on with my day.

Plus, I'll always have the memory of the New York Daily News the day after Trump was endorsed by Sarah Palin back in January.

There was coffee this morning but no newspaper. There was cereal but no scrolling through my Twitter feed. At this point, I felt totally disconnected from politics and current events — and I didn't like it. At this point, I had just 36 hours to go and then I can go back to consuming everything I want. I couldn't wait. My stack of reading material is going to be, for the lack of a better word, "yuge."

Day 7: Trump Comes To Me — Seriously

This has become almost impossible. I've avoided Mr. Trump but he hasn't avoided me. On this last day of the detox, the Donald was actually holding an event in New York City, in Staten Island (where I live) just a few short miles from my home. I got close, real close, to just giving up. At one point in the afternoon, my wife and I stopped at Trader Joe's, perilously near his event.

I thought to myself, "This is it. This is where the experiment ends. I can't avoid the Donald anymore."

Then, I realized that the safest place to be while avoiding Donald Trump would be in the organic vegetable aisle at Trader Joe's. Catastrophe averted.

Going into this experiment, I expected to feel relieved and at ease. Trump says and does crazy things pretty often. Removing myself from analyzing and reading and watching such insanity seemed to be a pretty good deal.

It didn't work out that way. And it's not just a Trump thing, per se.

I want to know what's going on with all of the candidates all of the time. This is a crucial election and the actions these candidates take now will affect our country for many years. As such, I don't think anyone should take pride or comfort in avoiding what has admittedly become a contentious and odious campaign season. I don't agree with Trump on many of his positions, but the only reason why I know that is because I've paid attention. I've read the news, watched the debates, and follow him on Twitter (and Instagram and Facebook, too).

I don't think banning all Muslims from the United States is a smart, acceptable, or a remotely realistic position. And I don't think we should punish women for having abortions (or even propose it hypothetically) — but, again, the only reason why I can disagree is because I know what to disagree about. I've consciously stayed informed.

I'm not a better or hipper person for having avoided the GOP frontrunner. No. For one week at least, I became part of the problem. I changed the channel or flipped the page when I should've been focusing.

You only produce a candidate like Donald J. Trump when the nation collectively turns the page; when it's more important to watch The Apprentice than the nightly news.

Yes, I did that for a week, but now I'm back. And I'm paying attention the best way I can: By writing this article and, more importantly, by voting against Trump.