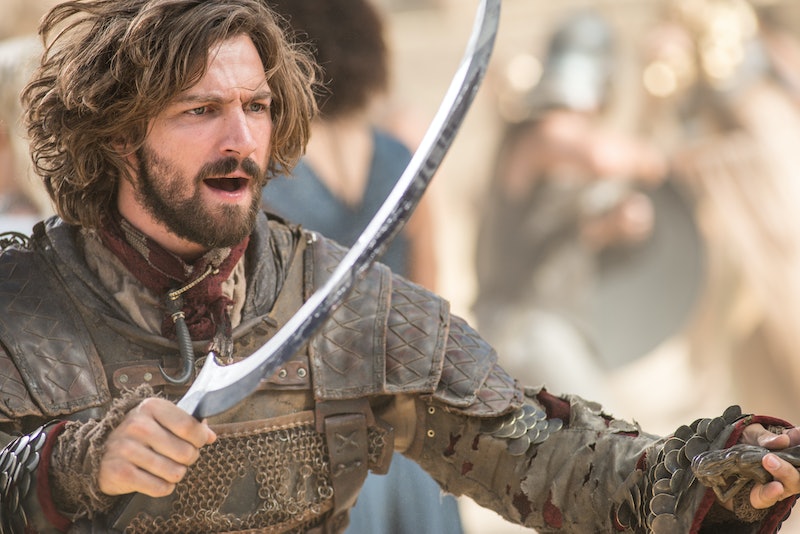 Wild theories about certain characters is part of the joy of enjoying Game of Thrones. You can watch the show and read the books — but you can also spend hours reading the countless Game of Thrones theories online. The character who serves as the subject of possibly more theories than any other non-major character is Daario Naharis — the sword-for-hire who allies himself with Daenerys Targaryen and fights at her side as she attempts to rule Meereen. The books and show have been dropping hints left and right about Daario's fate, but what do these hints add up to? Is the show trying to tell us that Daario is going to die in Season 6?

Daario is an odd cookie. In the books, he's a loud, obnoxious, blue-haired warrior, while, in the show, he's a much more calculated character with a more traditional appearance. Daario's allegiance to Daenerys seems to be built entirely on infatuation, and yet Daario — as the captain of the Second Sons — should have the smarts to know that infatuation is not something to build political allegiances on. Clearly something big is bubbling up in Daario's world, and here are some theories of how he could bite the dust in Season 6.

When's the last time being in love ended well in Westeros, Essos, or any part of the known world in Game of Thrones? Daario may be a helpful advisor to Daenerys, but that also gives him a massive weak spot that could be used against him at some point. It's likely that there isn't going to be anything on the scale of The Red Wedding happening in Meereen, but there's always something bad around the corner on GoT.

He Might Not Be Who He Says He Is

The Game of Thrones books have a penchant for introducing readers to a new character before revealing that BAM! — It was a character you knew in disguise all along! This is exactly what George R.R. Martin did with Ser Barristan Belmy in the books, that the show skipped over because fans are able to recognize actors no matter how much you try to disguise them. However, Daario as we know him has already been recast before, who's to say that Daario isn't Benjen Stark in disguise as one popular online theory would have readers believe? While the actors are different, Game of Thrones has recast characters before. Other rumors say that Daario is the yet unseen Euron Greyjoy, or that Daario is secretly the leader of the Sons of the Harpy. No matter who Daario is, fans can seem to agree that he's far more than Daario — and people in Game of Thrones have been killed over keeping much smaller secrets.

He's Hanging Out With A Guy Who Hates Him

Jorah "Friendzone" Mormont is not the kind of person to get caught in a Love Triangle with. After all, he happens to have a contagious and deadly disease, and he is also an incredibly strong fighter.

He's No Longer Protected By The Books

Season 6 is a big season for Game of Thrones, as it's the first one where the show is able to almost fully surpass the books in regards to the progression of the plot. Even so, Daenerys' story has had some major changes in the show — Ser Barristan died in the show while he's alive in the book, and Tyrion showed up a lot earlier than anyone expected. While, in the past, fans could feel comfort in the fact that their characters would stay alive in the show if they were alive in the books, the show in entering uncharted territory and no one is safe.

He's A Character On Game of Thrones

Really, this is the biggest indicator that you shouldn't get too comfortable with Daario. He's either a true and honest man, meaning he'll die soon, or he's a secret force of incredibly evil, which means he'll live far longer than anyone would like him to.

I feel like there's something unknown about Daario, even if GRRM or the showrunners of Game of Thrones haven't fully revealed what that something is yet. The more important question is will the show even get to his "thing" before he dies? There was a lot of hubbub surround the theory that Jon Snow was secretly a Targaryen, but that doesn't do anyone any good now that he's dead in the snow. The world of Game of Thrones is brutal for those in it, and those witnessing it, but hopefully Daario gets to really make a difference in some way before he gets killed off — like every Game of Thrones character apparently must.