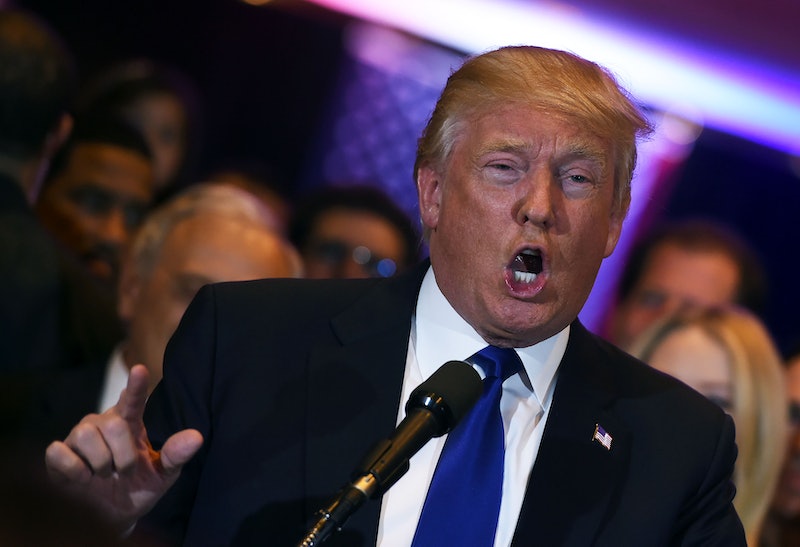 Before he dropped out of the race, Maryland might have been the one beacon of hope for Martin O'Malley, the former governor of the state. But now Maryland is left with no hometown hero to root for the during the April 26 primary election. So what are the predictions for the Maryland primary? The frontrunners in both parties look like they're going to have a good night.

Marylanders have turned out en masse, setting a record for early voting in the state. Almost 260,000 voters, or 7.5 percent of eligible voters, have already cast a ballot in the primary race, which in addition to the presidential election, includes an open U.S. Senate seat and a mayoral election in Baltimore. As The Washington Post points out, that's three times the number of early voters for the 2012 election with Mitt Romney. Not to say that the Maryland-specific races aren't totally exciting in their own right, but record-breaking voter turnout has been the norm in this contentious election.

Election wizards at FiveThirtyEight forecast Hillary Clinton's chance at winning the Democratic race at greater than 99 percent. Right now she's polling at 56.8 percent of the vote to challenger Bernie Sanders' 32.5 percent. They have projected that Clinton will sweep the state, expecting her to garner 63.3 percent of the Democratic vote. That's likely no small source of pride for the candidate, who was absolutely crushed in Maryland in 2008 (Barack Obama got 60.66 percent of the vote).

The Republican race, according to FiveThirtyEight's projections, is less decisive, but still pretty set. At the time of writing, the site has Donald Trump at a 81 percent chance to win Maryland's delegates. In the weighted poll average, Trump is currently leading with 41.2 percent of the vote. Ohio Gov. John Kasich trails him for second at 26.6 percent of the vote, and Texas Sen. Ted Cruz has a close third with 23.3 percent of the vote.

The projection for the final vote count, though, it a little closer. Trump is projected to win 40.3 percent of the vote, with Kasich expected to capture 30.6 percent of the vote, and last, but not least (well, actually in the case he does technically have the least), Cruz is expected to take in 27.1 percent. That further weakens Cruz's expected argument should the Republicans go to a contested convention that he is the best option for the GOP if there is no clear candidate.