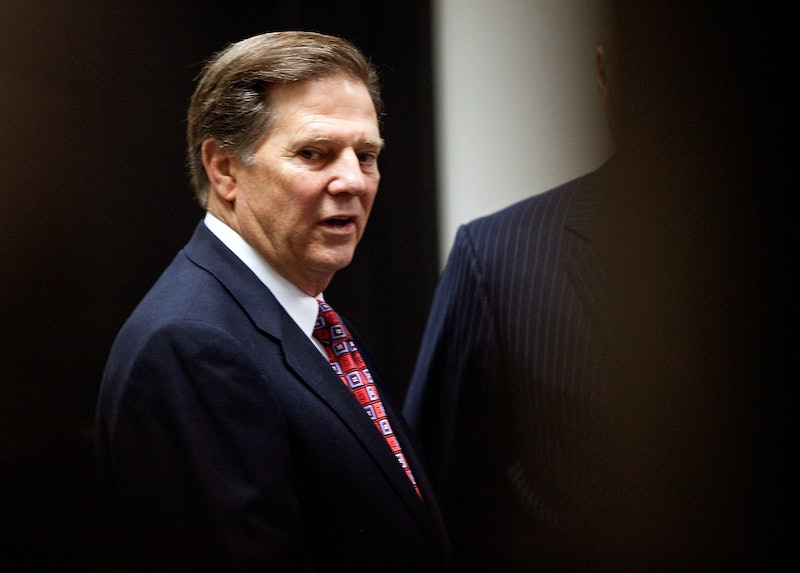 A lot of people have spoken up to defend ex-Speaker of the House Dennis Hastert ahead of his sentencing on bank fraud charges next week. According to prosecutors, Hastert pleaded guilty in October to one count of illegally structuring bank account withdrawals to pay off an alleged victim of sexual assault. Although it's no surprise that people wouldn't necessarily bring up the sticky details of Hastert's past, a letter from former House Majority Leader Tom DeLay was a particularly eager defense of Dennis Hastert, and ignored the allegations in a big way.

Hastert is scheduled to be sentenced on Wednesday and faces up to six months in prison, though his legal team is asking for probation for the bank fraud. The defense filed dozens of other letters (including one from ex-CIA director Porter Goss) in support of Hastert, which they said were mostly written in February and March. It's important to note that this was before federal prosecutors detailed the alleged sexual abuse that the hush money was being used for, but the details had already widely been circulated in the media. Many people asked their names to be removed from the letters, which were designed to show Hastert's character.

So that public knowledge, though the four instances of sexual abuse the prosecution noted are alleged, apparently didn't stop DeLay from writing a heartfelt defense of Hastert:

When Speaker Hastert became Speaker of the house [sic] and I became Majority Leader, he started a bible study every Wednesday at lunch. It was just me and him and Charlie Wright (a pastor). It was a very personal time for the three of us. We held each other accountable and we studied God's word and applied it to where we were at that moment. Nothing could have been more intimate between us. So I know his heart and have seen it up close and personal. We all have our flaws, but Dennis Hastert has very few. He is a good man that loves the lord. He gets his integrity and values from Him. He doesn't deserve what he is going through. I ask that you consider the man that is before you and give him leniency where you can.

Hastert isn't being sentenced for sex crimes, but if federal prosecution thought it was pertinent enough to bring up hush money in the trial, it seems to at least be suspect. It's unsurprising that DeLay would close ranks with his friend and fellow Republican, but it seems strange to hold him in such breathless regard with the horrific allegations still out there. After all, he is being sentenced for providing money to someone illegally.