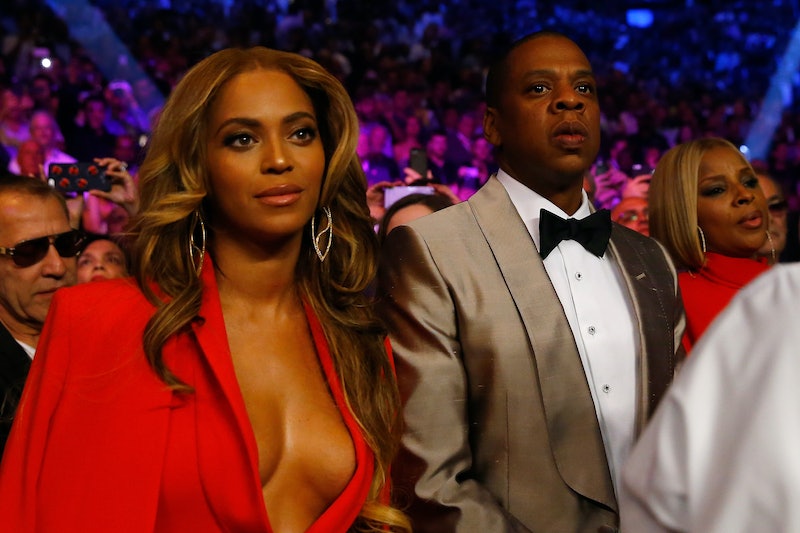 Leave it to Beyoncé to get people talking. Even before Beyonce's Lemonade HBO special aired, fans were trending it on Twitter, unsure exactly what it was that they were about to get. And then, when the special started, I don't think any of us were prepared for, well, that. The first half of the special featured a lot of songs that implied that Jay Z had cheated on Beyoncé — and, if true, the entire special itself implied that they were getting one hell of a divorce over it. However, the second half of the special then featured tons of footage of Jay Z and Beyoncé as in love as ever, even including some shots with Blue Ivy. So what is going on? Are Beyoncé and Jay Z still together?

The answer to that question is a resounding yes. Not only did Beyoncé sign off the Lemonade special by referring to herself as Beyoncé Knowles-Carter, but the special featured footage from their wedding video and new clips of the couple cuddling, laughing, and smiling together. Not to mention that gorgeous ending shot of Beyoncé and Jay Z holding hands. Granted, the couple weren't wearing their wedding bands in the special, but I'm trying not to let that make me panic. After all, a digital album is one way to make a divorce announcement sure, but not if your husband actually appears in it.

So, yeah, it might be easy to think that Lemonade was an hour long way for Beyoncé to drag Jay Z, but I think we should believe her when she says that it was a visual album and nothing more. After all, not every artist pulls the material from their albums from their real life. It's just as likely that Beyoncé was talking about her parents or playing to a theme rather than calling out Jay Z in a special watched by so many people.

The couple seems to still be together and still be very happy, and, let's be real. If they were going to break up, it would be with a well-worded PR statement, not an HBO special.