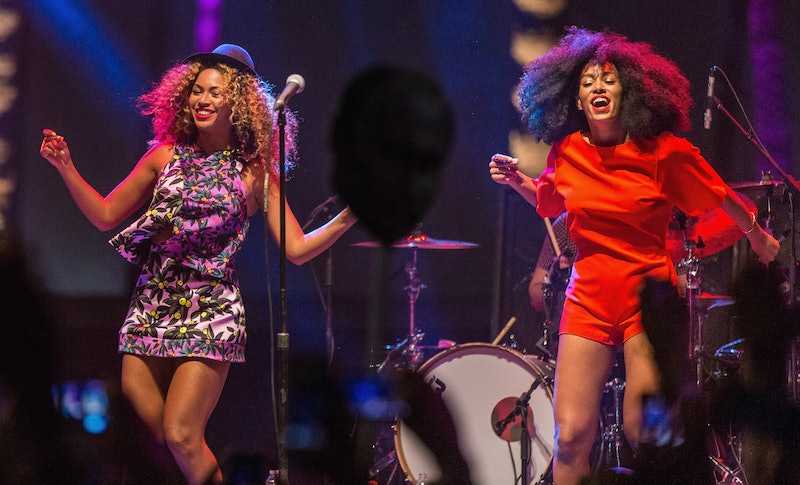 Ready or not, a brand new Beyonce album is here in the form of Lemonade. It's an album, a visual masterpiece, and an HBO special that aired on Saturday night. The one Lemonade song every woman needs to listen to is "Don't Hurt Yourself," a song about empowerment, knowing your own worth, letting go, and dealing with the haters. The track features Jack White singing the chorus, which points out that any negative actions you put out into the universe are really a reflection of yourself. Like the HBO special and the rest of the album, the lyrics on "Don't Hurt Yourself" are deep.

It's also hard not to appreciate a song that opens with Bey asking, "Who the f*ck do you think I am?" because only she could truly get away with that line. But as she sings on, it becomes clear that Beyonce is directing this song at someone who took her for granted and did not value her. "You ain't married to no average b*tch boy," she sings on, talking about how other men want her and how she's got her own money. Damn right. She even asserts her independence: "Get a bigger smile on my face, being alone." And she issues a "F*ck you hater, you can't recreate her no," basically saying she cannot be imitated — something everyone should know by now.

It's White's chorus, though, that contains the most powerful message to haters and anyone who has the nerve to hurt you. I'll let it stand alone below:

It's a beautiful message that is two-fold: 1. Hurtful actions and reactions reflect the other person; and 2. When you're hurt like this, don't hurt yourself, but let it go.

Bey demonstrates her worth in the second verse when she sings: "I am the dragon breathing fire / Beautiful man I'm the lion." Got to love that she's also complimenting the man (Jay Z?) as well. The rest of the song is a discussion of relationship issues: what she wants from the relationship and what he's got to give her or else she's getting out of dodge. When someone else hurts you, sometimes it's not about you, but about the other person's issues. And you shouldn't beat yourself up about it.

"Don't Hurt Yourself" is a powerful song about stating your needs, standing up for yourself, and not letting hate rule your life. Give it a listen on Tidal.

More like this
Elton John Shares Plans For Landmark Glastonbury 2023 Performance
By Sam Ramsden
The 'Love, Lizzo' Harry Styles Scene Is Just 1 Moment That Made Fans Feel Seen
By Brad Witter
Mariah Carey Is "So Proud" After Her Kids Joined Her In The Thanksgiving Day Parade
By Stephanie Topacio Long
Kim K Is Putting Kanye’s Memorabilia — Like Grammys & Clothes — In A Vault
By Jake Viswanath
Get Even More From Bustle — Sign Up For The Newsletter