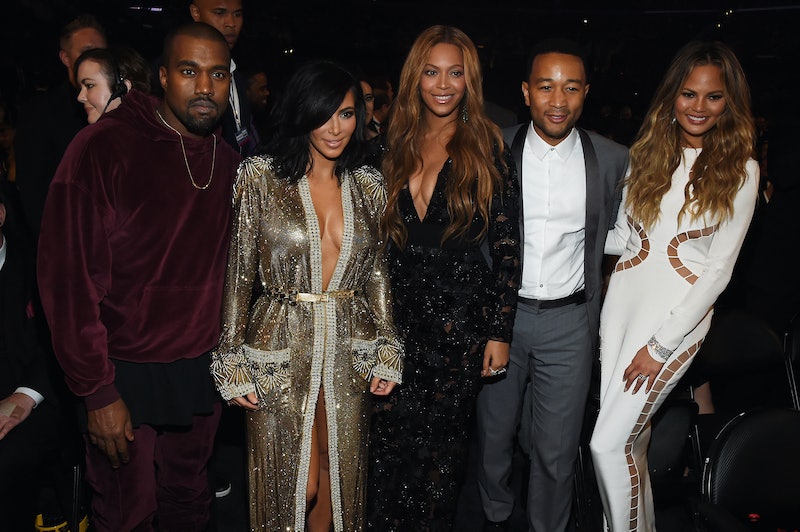 Oh. No. She. Did. Not. Actually, yes, she did. Kim Kardashian tweeted during Beyoncé's Lemonade HBO special, in which she debuted her new visual album of the same name. Big deal, right? Was Kardashian tweeting about Bey and her latest artistic triumph, offering words of love, support, encouragement, and awe, since Lemonade appears to be an album about an evolved woman scorned exorcising her pain in order to clear a path to forgiveness? Nope. During the home stretch of Lemonade, the reality star fired off a bunch of tweets featuring sexy, mysterious, and black and white photos. It felt like a move where she resorted to softcore shots in an attempt to unseat Bey's online and IRL dominance. And guess what? The Internet was having none of that nonsense. In fact, the web told Kardashian not only to take a seat but to take several. Actually, the Twitterverse told Kardashian to take the whole darn row.

Kardashian was dealt with swiftly and efficiently, as the Twitterverse put her on blast for having the audacity to try and shift the spotlight away from Beyoncé. What Kardashian was tweeting about and why is unclear; she's not a trending topic, either.

The images were provocative and seemed to have some sort of goal and intent. Too bad I didn't have time or inclination to speculate because #Beyoncé.

It was Beysus who had our rapt attention. Sorry not sorry, Kim. You so thirsty — how about some Lemonade?

Ouch. Is this Kardashian and husband Kanye West juxtaposing the strength of their marriage against what appears to be the fractured-and-repaired Jayonce union?

What is this about?!

The power of suggestion of... something?

I have no idea what the narrative is here and IDC since I am still wondering WTF happened with Bey and Jay. Samesies for the rest of the world.

Team Bey all the way.

You know, KKW could be doing reverse psych here. She is getting attention for trying to take attention away from Lemonade. Did she really just do that? Is it Kim for the win?

Aw naw. Tar-jay and Bey slay all the way.

Dayum! She called it.

That's all she wrote.

And that's how you shut down Kim Kardashian.