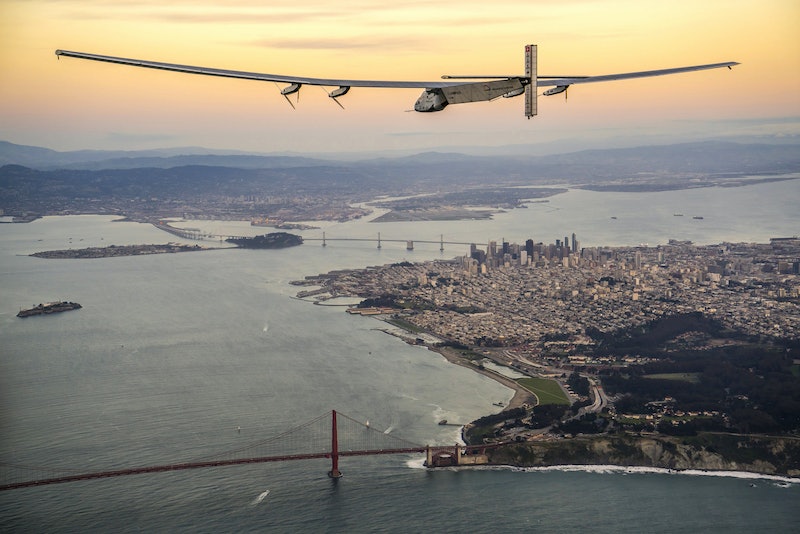 We've come a long way since the Wright Brothers. Just before midnight on the West coast, a solar-powered plane landed in California on Saturday after flying from Hawaii with no fuel. The plane, Solar Impulse 2, is powered entirely by solar energy and is intended to demonstrate the power of clean technology. It's an impressive feat and an important step forward, but don't pack your bags for a similar flight of your own just yet.

Solar Impulse is the work of two Swiss scientists, psychiatrist Bertrand Piccard and engineer Andre Borschberg. Together, Piccard and Borschberg piloted the innovative plane across the Pacific Ocean, taking turns at the controls. It's all part of a larger goal: to fly completely around the world with no fuel. The pair, supported by a team of more than 100, started their journey in March 2015, when they took off from Abu Dhabi. The circumnavigation was originally expected to take just a few months, but unpredictable weather conditions and repair work delayed the program significantly. The plane arrived in Hawaii last July but wasn't able to take off from the island of Oahu until early Thursday morning. (In a pleasant coincidence, the plane was en route on Friday, which was also Earth Day — how fitting!).

Despite the delays, the plane and its team have already set several new records and precedents. It was the first solar plane to fly through the night and the first to fly between two continents, according to the company. "It's a new era. It's not science fiction. It's today," Piccard told CNN after completing the most recent flight. "It exists, and clean technologies can do the impossible."

Although it can do the impossible, this clean technology probably won't be ready for practical application right away; NPR even referred to the plane as "experimental." Visually, the plane has been compared to a dragonfly. It has the wingspan of a Boeing 747, but it only weighs about as much as an SUV, according to CNN. If replicated for commercial use, airlines would almost certainly want the maximize the cabin area, which could pose a design challenge.

Another concern is weather. Because the plane flies on solar power, it should go without saying that it needs to be exposed to sunlight in order to have and store enough energy for a flight. The weather has already slowed Solar Impulse's journey substantially.

Perhaps the biggest obstacle to practical application — at least from an outsider's non-scientific point of view — is the speed of the plane. The journey from Hawaii to the San Francisco Bay area took Solar Impulse more than two days. In fact, the plane only flies at about the same speed as a car. Currently, passenger planes can make the trip in around nine hours.

Despite these challenges, the solar-powered flight sends a strong message about the future of air travel and the use of alternative fuel sources in general. Clean energy can provide a safe, successful transportation method. If nothing else, Solar Impulse's flight shows that such energy warrants further research into how it can be developed into more practical forms.