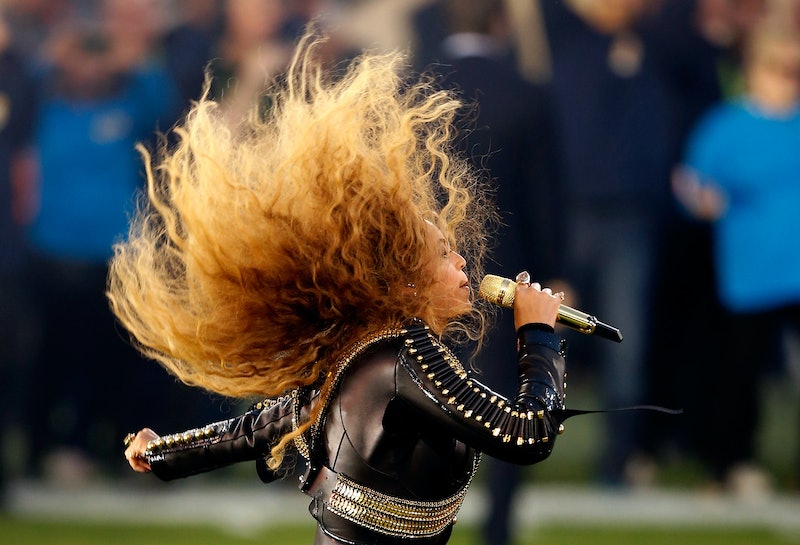 Compared to Beyonce's prior full-length works, Lemonade, released on April 23, is a marked departure from what fans have come to expect from the singer, as underscored by the album's 10th song, "Freedom." The track, which features Kendrick Lamar, moves away from the issues earmarked in 2013's Beyonce (namely: body image, sexuality, and monogamy) and instead turns an eye toward racial and social issues, themes perfectly matched by the ones explored in Lamar's 2015 album, To Pimp A Butterfly. Given that there's clearly a lot bubbling beneath the surface here, what do Beyonce's "Freedom" lyrics mean, actually?

According to Danielle Campoamor at Romper , the song stands as an embodiment of how "you're entitled to your feelings; and by feeling them and letting them go, you free yourself." That definitely seems to be the case, but I don't believe that "Freedom" is merely about inner freedom, but about the physical freedom of a people — as shown by Lemonade's themes of racial inequalities. As a poster on Genius pointed out, to "dismiss the personal narrative in this song [...] focusing on the experience of black women" is to dismiss the track's visual narrative, lest we forget that it "gives us women holding pictures of lost sons and fathers."

I had a different understanding of the song before seeing its accompanying visuals in Lemonade, however. At first, "Freedom" seems like such a rallying cry — against centuries of socio-ecomic oppression and decades of police brutality swept under the rug by the media. Yet once I saw the visual component, which prominently features model Winnie Harlow, I think "Freedom" accommodates a much broader interpretation. I still think it's a rallying cry, to be certain, but my understanding of it now is that it can apply to most any individual circumstance: that every woman must negotiate her own freedom on her own terms and that, regardless of external circumstances, everyone has the ability to relinquish their own chains. "Freedom," in this sense, is about sending a message of empowerment, regardless of what you seek to free yourself from.

That being said, "Freedom" isn't afraid to place race front and center. In the chorus, Bey vows to not "let my freedom rot in hell," while Lamar discusses news coverage of police brutality with lines like, "Channel 9 news tell me I'm movin' backwards\Eight blocks left, death is around the corner\Seven misleadin' statements 'bout my persona\Six headlights wavin' in my direction\Five-O askin' me what's in my possession." The New York Times commented how the song "mixes preaching and a prison song (both collected by John and Alan Lomax)" with Lamar's rap verses alongside a "1960s Fuzz-Tone psychedelia (sampling the collectors’ item Puerto Rican band Kaleidoscope)" in calling for, once and for all, Freedom with a capital 'F.' Fuse also noted how the song, a mix of "blues, soul, rock and gospel squeezed into a Vitamix," "samples a 1947 recording of a Mississippi State Penitentiary prisoner."

Most significantly, both the track and the album at large, which culminate in "something approaching a call to arms," according to The Guardian , stand in sharp contrast to other boundary-pushing concept albums from artists of a similar ilk. While The Guardian points out how both Rihanna and Kanye West attempted to pull off similar feats "on Anti and The Life of Pablo respectively, the difference is that those albums were at best a bold and intriguing mess: the sense that the artists behind them were having trouble marshalling their ideas was hard to escape." On Lemonade, though, anthems like "Freedom" assure a firm sense of control that proves how, once again, when it comes to artistry, Beyonce is in a category all her own.