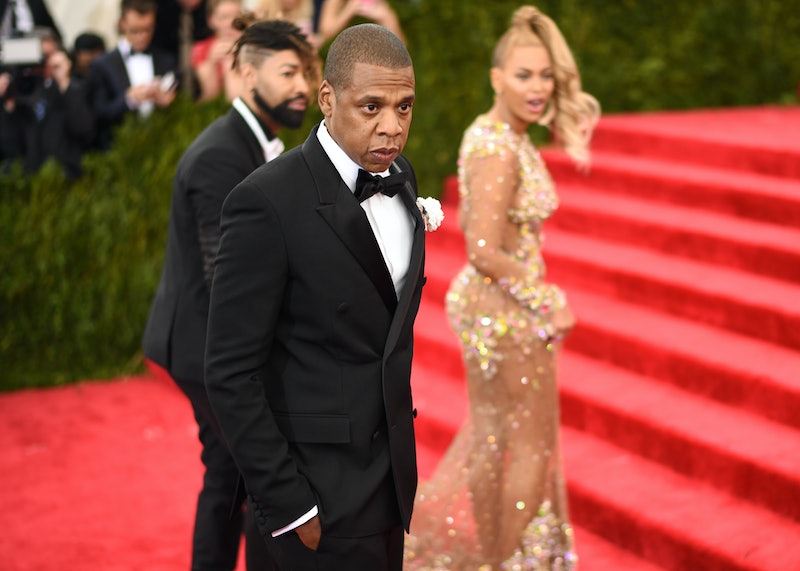 Beyoncé's Lemonade is a perplexing combination of art, film, and new music set against the backdrop of the American South. But, is there something more going on beneath the surface? Fans have already started trying to determine the meaning behind Beyoncé's statement during her HBO special and there seems to be one theory that's more popular than all the others: Is Beyonce's Lemonade about Jay Z? It seems specifically that many fans are wondering if Beyoncé is getting a divorce and this was her big way to announce it. Many of Lemonade's lyrics hint at themes of freedom and liberation, with multiple lyrics referring to a "him" that has upset Beyoncé, and it has Twitter in a tizzy.

Some of the choice lyrics fans have pointed to include, "My daddy warned me about men like you," "'Cause every promise, don't work out that way," "Nothing seems to hurt like the smile on your face," and the especially brutal couplet "Looking at my watch, he shoulda been home, Today I regret the night I put that ring on ." Yikes! Jay Z, what happened?

Throughout the special the tweets came thick and fast speculating who, exactly, Bey was singing about, and whether it was Mr. Carter himself. Bustle reached out to representatives for Beyoncé and Jay Z about Lemonade and the rumors of cheating and divorce that fans are spreading on Twitter but has not yet received a response. But, rumors or not, fans have a lot to say about Bey's latest release.

Those Wondering Who Inspired The Song

And What It Means For The Couple

I'm worried. Are you worried? Should we be worried?

And How Jay Z Is Taking The News

Be strong, Jay. Be strong.

Literally same. At least tell us who Becky is.

More like this
Taylor Swift Fans Sue Ticketmaster For The Eras Tour “Ticket Sale Disaster”
By Jake Viswanath
Dolly Parton Joins TikTok & Debuts A Song About Baking
By Jake Viswanath
North West Has Mastered The Wednesday Addams & Lady Gaga TikTok Dance
By Jake Viswanath
The 'Love, Lizzo' Harry Styles Scene Is Just 1 Moment That Made Fans Feel Seen
By Brad Witter
Get Even More From Bustle — Sign Up For The Newsletter