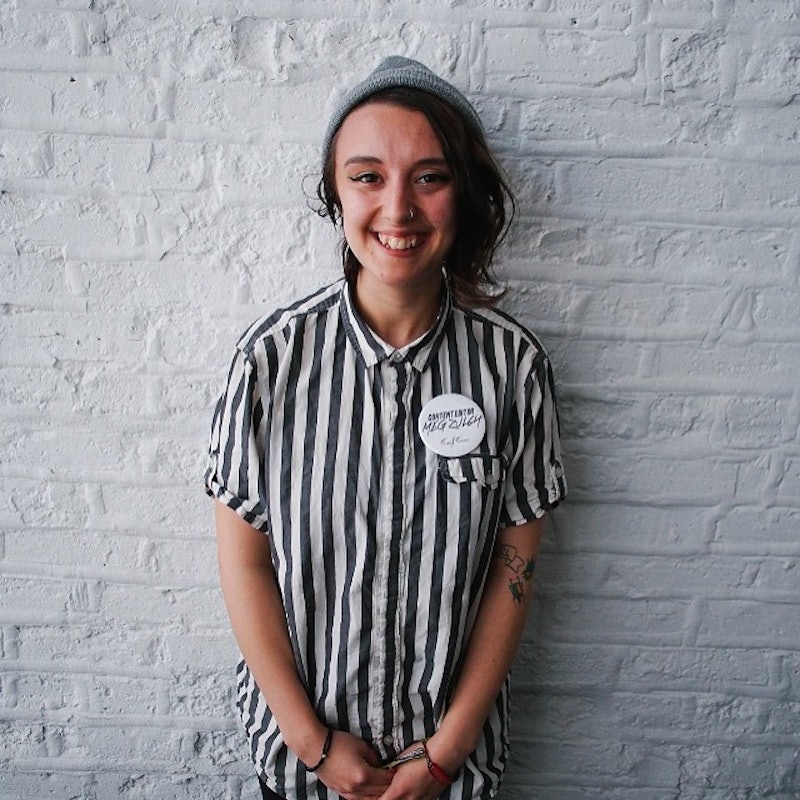 As much as I'd love to say that the way I dress isn't in any way governed by outside influences, our choices aren't usually made in a vacuum. Since I'm gender nonconforming, I prefer wearing skirts and lipstick on the days I feel more feminine, and loose-fitting button-ups when I feel more masculine. But getting dressed is not usually as simple as keeping up with the fluctuation of my gender sentiments. The truth is that no matter how much I want to wear my favorite miniskirt, I always feel more vulnerable when presenting femininely in public.

This isn't because femininity isn't empowering, or because wearing my favorite lipstick doesn't give me all kinds of confidence. Personally, I definitely feel that I look my best when rocking my favorite shade of Obsessive Compulsive Cosmetics Lip Tar.

Both privately and when among friends, I can freely embrace my femininity with ease. But when in public spaces, my skirt and lipstick can act as a huge red targets for sexual harassment. In the eyes of much of the public, I am always a woman despite my fluid gender identity. So when I wear feminine indicators like dresses and makeup, I feel like I become "a woman who's asking for it:" A woman who cannot peaceably exist in her own body without having it be commented on or touched.

I am not a woman, though, and I am grateful for that. Femininity is wonderful, but being a woman can be plain dangerous.

I feel awful saying that; like an inner misogynistic is breaking through. Like I'm turning away from the femininity that is only undesirable to me because of the way society teaches so many men to react to it. I love femininity and often encourage others who want to to embrace it to do so. But as a feminine-looking person, I can't help but feel bitter for all the years I've been penalized for how I choose to dress.

According to the Rape Abuse And Incest National Network, one out of every six women in America will be sexually assaulted in their lifetime, compared to one out of 33 men. The odds are even worse for trans women, considering one in two trans people are sexually abused or assaulted at some point in their lives, according to the Office For Victims Of Crime. I feel the weight of these statistics not only from my trans friends who have been subject to abuse, but through the responses I get when I rock more feminine clothing on the street.

Whenever I wear a crop top that accents my breasts, or a short, figure-hugging skirt, it feels as though all eyes are on me. Walking down the street without being cat-called is impossible. Going to shows and bars is rarely enjoyable for too long, since so many man seem hellbent on interrupting my time with overly-confident flirting or nonconsensual touching. Walking home alone is the ultimate risk: I feel like my skirt is acting as a magnet for predatory eyes as I hyperventilate the whole way there.

Even though I always try to tell people that your gender is not in your clothes — that your presentation is masculine or feminine based on your identity and intentions alone — this idealistic way of seeing things might be unrealistic when you're trying to stay safe in a crowd. The fact is, at least in my experience, that a lot men will react differently and more forcefully to the image of a miniskirt than a pair of pants.

Unfortunately, this is the terrifying reality for many feminine people, if not all. But as a survivor of assault, catcalling and verbal harassment trigger me to disassociate, becoming lost in potential danger while trying to watch my favorite band play with some pals. And as a genderqueer person, constantly being identified as female by thirsty humans makes me feel even more outside of my body.

This is why regardless of how I'm feeling, I often perform as masculinely as I can in more public spaces. Like magic, my loose button-ups, beanies, and "boyish" gestures almost always repel unwanted attention, with only a few exceptions here and there. And that's a power I never want to give up.

For Hooligan Magazine in Mar. 2016, I spoke with model and gender activist Rain Dove about how her career has benefitted from her extremely versatile and androgynous look. She took the opportunity to admit to having similar feelings about masculinity as a means of safety in public.

After speaking with Dove, I haven't been able to let go of one question: Is denying your femininity for the sake of safety problematic? Is Dove using her passing privilege problematic, or a betrayal to the rest of the feminine population?

I worry that by canceling out my own femininity in certain spaces in order to feel safe, I'm giving into the cycle of sexism. I'm inadvertently perpetuating the notion that you have to be "one of the boys" in order to be taken seriously. I wonder if it betrays the full scope of my gender identity — a truly random mishmash of the masc and the femme. But more and more, I'm beginning to realize that avoiding feminine indicators in my day to day dress is a necessary evil. If it helps combat incidents that tie into rape culture and misogyny, it can't be a bad thing per se.

There are many loud and proud activists I know who fully embrace their femininity on the streets every day. Although I deeply respect and admire those who are unapologetically feminine — those who fight the injustices of the world with dresses and lipstick — I just can't be that brave at this point in my life.

For now, I have to prioritize my physical and emotional safety before anything else. To me, femininity is often the most powerful when I'm in the presence of other femmes, shut away from prying eyes so that we can celebrate each other without having to look over our shoulders.