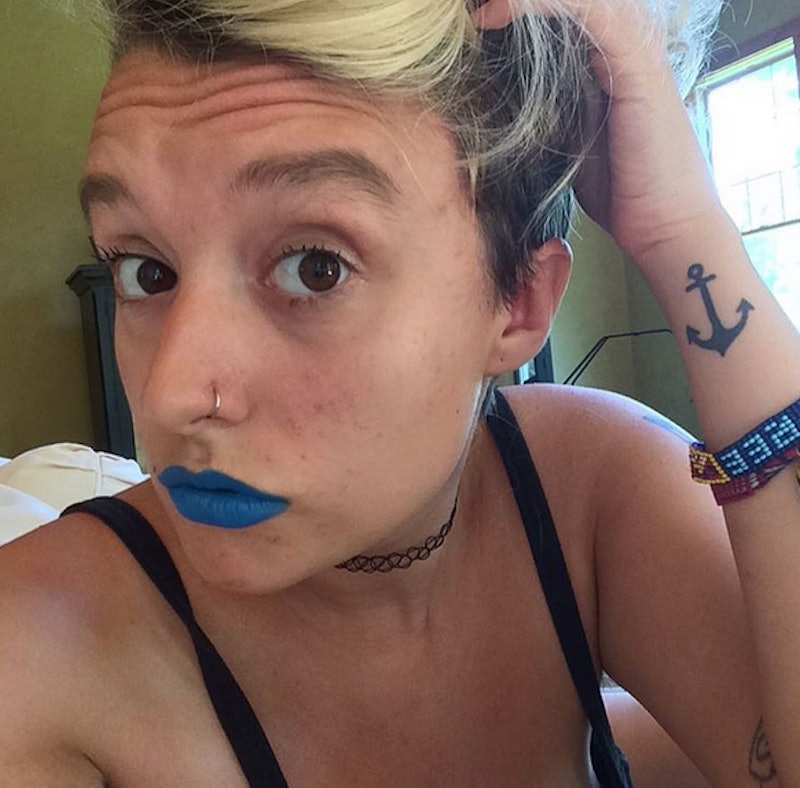 Non-binary people in the media, however few and far between they are, have the unique responsibility of representing others like themselves, and offering their bodies and voices as tribute for the cause of greater trans visibility. As a genderqueer person, I know how important this kind of work is. This is why, since coming out about my gender identity and living my life more authentically, focusing on gender politics in my written work and openly discussing my very existence are crucial for me. Growing up, there were no gender nonconforming or trans people on TV I could look up to. No one was acknowledging my androgyny, or assuring me that being queer was OK. No one was there to show me that I could love lipstick and hate shaving. And that it's not only possible, but OK, to have a vagina and not be a girl.

Save for a small handful of trans folks in the mainstream — which didn't happen until I was in college — I was the only person I knew who felt this way, and I wanted to talk about it. So, I became the change I wanted to see in the media by telling my story time and time again, hopefully connecting to readers who felt similarly and the activists working toward normalizing queerness in the sartorial and media kingdoms.

However, in many cases and among many circles, this caused me to become perceived as the constant rebel: The brave, non-binary person who was unafraid of living authentically. Of course, I can identify with this characterization. In a lot of ways, that is who and what I am. But my politics and my job, which allows me to write extensively about these subjects, are not all that I have to offer the world.

Likely thanks to the scarcity of gender nonconforming narratives in the media (although the number has certainly been growing over the past couple of years) and the novelty of my non-binary identity, I often feel like people see me as a fascinating object that has all the answers about the ever-intriguing queer experience. It's a daunting thing, since I am actually only one person whose knowledge is limited by their own experience of gender. I speak based on my own history, writing for women's interest websites along the way. But based on how others perceive me, my responsibility offline seems to expand far past my boundaries.

I believe deeply in the work that I do, and take much pride in it. But as time goes on, it seems that I can't just hang my hat at the end of the day. Because to many friends, family, and people on the Internet, I'm always an activist. I'm always politicized, if not entirely tokenized. My voice and my stories certainly symbolize diversity and queer experiences, which is very important to me. However, on my days off, I'd like to be treated as a human with a lot of varied ideas, preferences, and personalities, rather than simply as a symbol of queerness.

People's tokenizing and politicizing of my body often stems from my appearance and style, since many of my choices are considered subversive. I have seven tattoos, two of which are stick and poke designs. I dye my hair a lot, and don't shy away from matching my lipstick to whatever color that happens to be. I hate shaving, and I love wearing men's clothing.

Perhaps because many of my stylistic choices are considered queer or alternative, they become the center of awe and attention. This isn't always bad, of course, but oftentimes it leads me to feel as though I'm a "queer accessory" of sorts. For some, I am the only person they know who is genderqueer, whose skin is peppered in ink, and who keeps their armpits unshaven. And because of that, I've experienced the weirdness that is being flaunted to others as a token of status or as a party's sole signal of diversity. Basically, I'm the token genderqueer. It sometimes feels like, "Look everybody, my friend uses they/them pronouns and doesn't care if you see their hairy armpits!" In situations such as this, I just smile and nod, doing everything I can to hide embarrassment or discomfort in this awkward social situation. Although I love these parts of myself, I wish they didn't always overshadow the parts of me that aren't immediately visible, like my love for dogs and my obsession with animal behaviorism.

I've had my sexual and gender identity announced by overzealous friends when meeting new people, as though it were a title or as casual a topic as where I went to school. I've had strangers "ooh" and "ahh" over my ink, then tell me how brave I am for not shaving my body hair. My parents have outed me to many of their friends, since being the parent of a gender nonconforming human apparently hikes up your score in the "cool" and "progressive" parent departments.

After I came out as genderqueer, my father essentially told everyone he worked with. And as soon as I visited home after coming out, he stared in awe at my lavender/silver hair and fresh nose ring. "Come here, let me show everyone how you look now," he said to me, as he excitedly escorted me through his entire office. I was mortified, but I endured it. Mostly because I knew that my father, in his own way, was showing me that he was accepting of my identity. Sure, it might have been overcompensating. But it still meant something to me, no matter how awkward it felt.

And that's where the dilemma with gender nonconforming people can lie in general. Humans will ask tons of questions about your identity and gawk over the "bravery" of your appearance. It's annoying, but I understand it's meant to be supportive. I just wish my other interests (like yoga) and accomplishments (like the success of the arts magazine I edit for) were rewarded with just as much overt support. There are a lot of things that I'm proud of in my life — and things that make me who I am — that also deserve attention.

Sometimes, I don't even think I have the right to be annoyed by all of this. As a writer interested in generating a greater understanding for and representation of genderqueer people, I live and breathe visibility. I'm up for the challenge of writing candidly about my experiences, of educating others about gender, and working to bring more trans representation to fashion and beauty.

But it's exhausting to be political all the time. Yes, I'm genderqueer. Yes, many of my style choices are kind of subversive. But at the end of the day, the work that I do is not all that defines me. And I don't exist as a hairy, tattooed human simply to further my beliefs, brand, or personhood. My style choices, my politics, and the pronouns I use are all small parts of me that make up the bigger picture of who I am. They're inherently subversive, sure, but they're not always meant to be a statement.

On my days off from breaking the binary through my writing, I want to be treated normally. I want to engage in stereotypically feminine activities, like doing my nails and eyebrows with my feminine friends. I want my parents to ask more about my multiple projects and less about my gender identity. I want to go to a party and blend in like everyone else. I don't want everything I do and say to be picked apart as another extension of my political ideologies (even if these beliefs leak into various parts of my life). At the end of the day, I'm just Meg, and I just want to be treated as such.