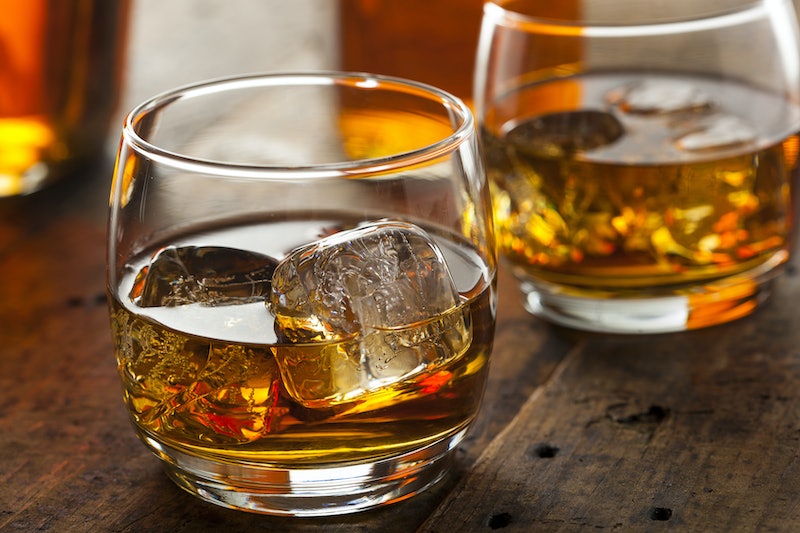 Have you ever wondered what the difference is between bourbon and rye? Depending on your preferred style of drinking — basically, if you have standards aside from "less than $20" and "oh god, anything but grain alcohol" — you may already know the technical answer. Like all whiskey, bourbon and rye are made from fermented grain mash (yum?) which is aged in charred oak casks. However, the difference lies in the content of the mash: According to Thrillist, bourbon's base grain is mostly corn, but rye whiskey is made from, well, rye. As a result, bourbon is known as being sweeter and smokier, while rye whiskey has a spicier flavor.

Alcohol snobs tend to swear by this difference — many believe that the Old Fashioned should be made with bourbon, for example, and Manhattans traditionally use rye whiskey. According to recent research from Drexel University, though, the flavors may be more similar than people assume. In a study, participants were asked to sort 10 different kinds of whiskeys, five bourbons and five ryes, based on smell into whatever categories they wanted. At first, the bottles were anonymized, but when participants came back for a second session, the same whiskeys were presented with new, randomized labels.

Here's where it gets interesting: After statistically analyzing their choices, researchers found that participants didn't separate the whiskeys into ryes and bourbons. Rather, they categorized the drinks by factors like brand, alcohol content, and age. According to lead researcher Jacob Lahne, PhD, this may be the result of distinctive brand-related flavors, which may outweigh the difference in mash.

"There is definitely a tendency for bartenders to talk about how some drinks should absolutely be made with bourbon or rye, and I think it’s clear now that there is more flexibility,” Lahne said in a press release. “In a way it’s fun and exciting — it gives you a bigger universe to play with."

As Medical Daily points out, there's a possibility that rye and bourbon whiskey used to be more distinct; today, however, the drinks are more similar than they are different. So next time someone tries to interrupt your drinking with outdated whiskey knowledge, feel free to school them in the ways of modern whiskey. Or just take your drink somewhere else — either way, Ron Swanson would be proud.