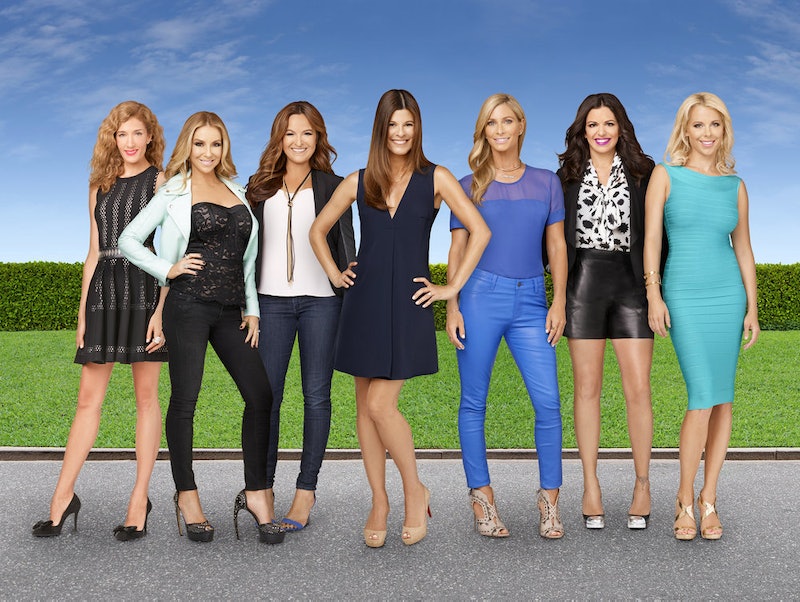 Bravo's TV shows are known for grouping women together based on some sort of quality — be it their marital status, location, or career path — and then stepping back in order to allow them to turn into reality TV superstars. And the cast of There Goes the Motherhood , Bravo's newest series, might be about an enclave of Los Angeles mothers, but even that distinction won't be enough to stop these ladies from making their mark as the next group of drama-fueled, entertaining reality stars. Because, if anything, There Goes the Motherhood suggests that even though these women are all mothers, who all want to do what's best for their kids, that alone doesn't define them.

In fact, within this cast, there's everything from a former pop star, an aspiring novelist, and the parenting expert who brought them all together. And as a group, they make up one of Bravo's most ambitious casts yet. These ladies have a lot that they want to do far beyond raising their kids. And, pretty much the only similarity they all have is that if someone crosses them — or their parenting methods — they're going to have something to say about it.

According to Bravo, Jill is a decorated and well-educated psychotherapist with a focus on children's sleep habits and childrearing. Her Twitter bio says that Spivack founded Sleepy Planet Parenting, the company that eventually formed the "Mommy Group" featured in TGTM. So far, she's a little distant, but that's because she's giving these women advice as an expert. She's the Lisa Vanderpump of this series.

Alisa might be between jobs right now, but her Bravo bio says that she's a former film executive. In the premiere, she said that she's currently separated from her husband, but she hasn't shared many details yet. She also has her own mommy blog, where she calls herself the "baby stylist," for how she curates her son Grayson's wardrobe.

On TGTM, Beth is in the middle of her journey from traditional wife to single mom. She married young and has a large family — four kids! Now that she's getting divorced, she went from having people to help her with almost every part of childrearing to figuring things out on her own. And while her tenacity is admirable, I think I'm most impressed by how much time she devotes to working out while taking care of four kids.

Like Beth, Jen temporarily took a break from work when her kids were young, but after a divorce, she's already built herself both a new family structure and a new career for herself. According to Bravo, dating will be a big part of her storyline, which should be a little hard since she practices co-sleeping (having her son sleep in the bed with her). But if you're curious how her dating life is going, you can read her blog, Dating With Diapers.

Leah is a bit eccentric, even though she hasn't had the chance to speak up on TGTM just yet. In the premiere, she said she likes having some traditional gender roles, like having her husband as the breadwinner, but she also brings some very unconventional approaches to raising her kids, with a little bit of stereotypical Los Angeles hippie mysticism thrown in. According to her Bravo blog, she's worked for years as a stylist, and her Instagram shows that she also occasionally does modeling work.

Meghan is the opposite of high-strung — she fully admits that she needs to set better boundaries for her unruly group of kids. She and her husband Nick are a total mess, and, even though they're devoted to their kids, they're working on finding their romantic love. But already, I find her the most relatable member of the TGTM cast. And, since the season filmed, she just gave birth to another child, according to her Instagram.

Stefanie is a former girl-group member (from Wild Orchid with Fergie) and current businesswoman as an executive at Baby Genius Brand alongside her husband, and she's a lot of fun and very accomplished. Her marriage is seemingly in great shape, proving if Stefanie's story is true, Fergie is a great matchmaker. Ron Fair seems to be encouraging his wife to get back into the music game, and every Bravo show needs to have at least one cast member who's pursuing a music career.

I look forward to getting to know the There Goes the Motherhood cast even better for the rest of the season.