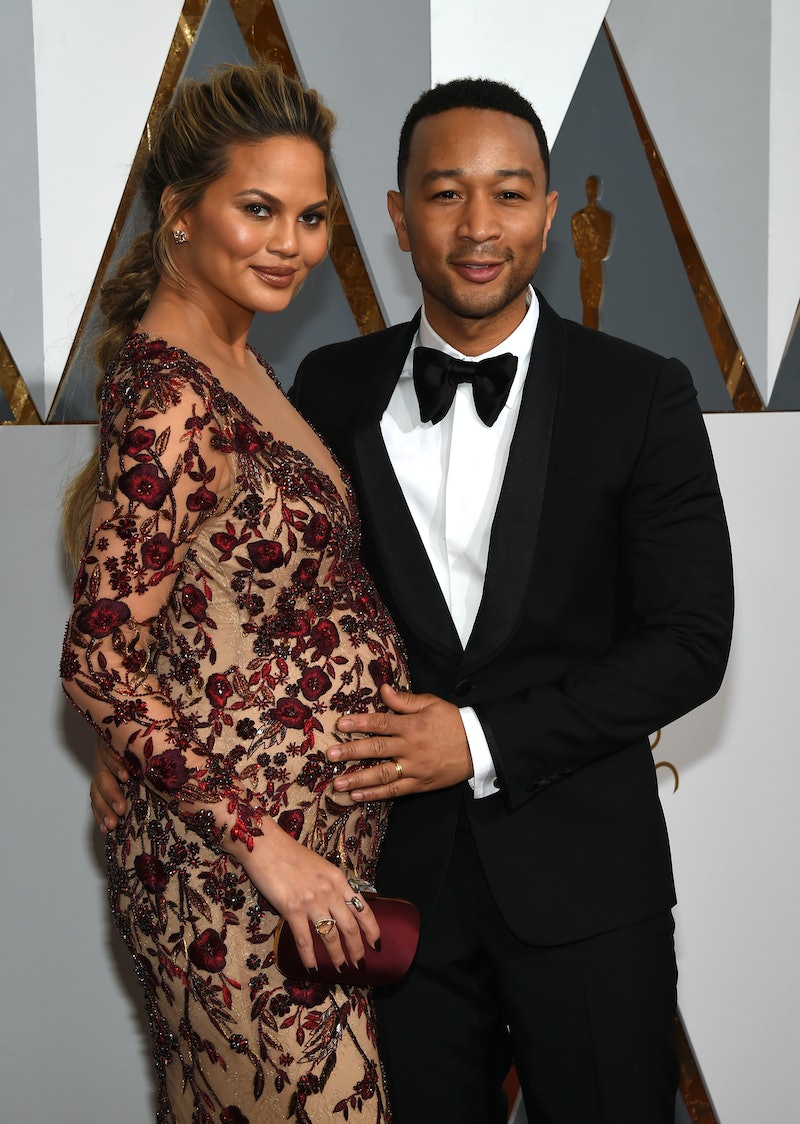 Chrissy Teigen is very rightfully calling out the haters who are criticizing her for going out so soon after having her baby. After paparazzi photos were released of the model and husband John Legend going out just a week after having baby Luna, Teigen received some nasty comments and pieces of "advice" from people who didn't approve the couple leaving home so soon. Yet in a classic Teigen move, the model clapped back at her critics, posting screenshot after screenshot of critical comments to Twitter and adding her own — hilarious — responses.

Yet while Teigen's comments are funny as always, the bigger issue at hand here is that she shouldn't have to defend herself to begin with. People (especially on the internet) are hyper critical of new moms, particularly famous ones, when everyone's parenting choices should be entirely their own, not subject to other people's opinions. Yet time and time again, pregnant women and mothers are shamed for their decisions, whether it's about the shape of their bodies or the ways they're raising their kids. And Teigen, it seems, is no exception. At least her comebacks are great:

Teigen, who uses her trademark sense of humor on most of her social media battles, has never been one to shy away from conflict or self-deprecation. After giving birth to Luna, she tweeted her mock-confusion over whether or not to tone down her historically outspoken Twitter persona, writing, "Thank you for all the well wishes!!! we are so happy and excited! i dunno what to tweet now. does my twitter change? this is so awkward."

Sadly, the most recent criticisms she received aren't the first second, third, or even fourth time an onlooker has made comments about the model's parenting choices. In February, Teigen defended her choice to conceive using in-vitro fertilization, and used her responses to educate her Twitter followers about the process of artificial insemination. Then, in October 2015, she shut down followers who were up in arms about some of the dietary choices she made during her pregnancy in a string of hilarious tweets.

Earlier that month, she warned her critics to "get out of [her] uterus" following speculation that she and Legend were expecting twins after she posted a picture of her growing belly to Instagram. "I did IVF," she wrote. "One at a time. It isn’t twins. I can see the damn thing. [...] I put one embryo in. I have ultrasounds every few days. I didn’t announce at a week."

Of course, there isn't a person in the world who wouldn't reiterate that no matter what most public figures do, say, or post, the haters are gonna hate. But what everyone actually seems to forget in this case is that Teigen always gets the last laugh, as evidenced by a comment she tweeted earlier on Sunday making light of her parenting critics in signature fashion. When asked about baby Luna's whereabouts by a fan, Teigen tweeted back simply, "i dunno i can't find her." We should all handle critique with such flare. I can only hope that when 2036 or so rolls around, Luna is just as social media savvy as her mom.