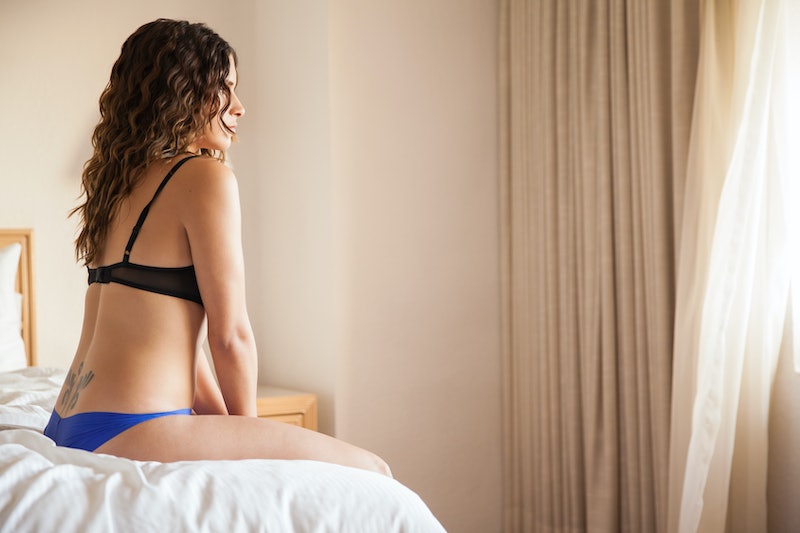 Bad dating habits — like big, far-fetched dreams or visions of marrying an unavailable man or woman — are hard to let go of. And when it comes to your sex habits, it can be even more difficult to take a long hard look at what you thought was serving you and realize it’s time for an upgrade. While your 20s are all about discovery and laying the foundation for what you hope for in the years to come, your 30s are all about taking what you've learned and making your sex life stronger, both for yourself and for your partner(s).

Apart from the simple goal of making what already feels good feel better, another convincing reason to ditch bad sex habits is how your sexuality peaks in your 30s. “Women become more sexual in their 30s, having more fantasies and even having more sex,” Dr. Melissa Fogel, a licensed psychologist and certified sex therapist, tells Bustle. “Women have more intense orgasms and are more aware of what their body likes and dislikes. They also tend to be more confident with their own bodies once they reach their 30s. Being confident allows you not to focus on all of those insecurities you have about yourself and just enjoy the sensations and pleasure during sex.”

But to really relish all of the perks of being a sexual being in your 30s, there are some bad sex habits you need to leave in your 20s.

Risky behavior involves sex that’s unprotected or makes you feel awful, whether that entails not using condoms, drinking too much, or having casual sex when you're not into it. It's not the kind of sex you want to be having in your 30s. Fogel says to avoid putting yourself in a situation with "potentially harmful outcomes.”

When you were first starting to have sex, you likely learned from movies (pornographic or not) that when a woman is turned on, she’s loud. But have you considered whether that’s really you when you’re getting hot? Sex expert Coleen Singer tells Bustle that by the time you reach 30, you should be able to own who you are in bed, without sounding like someone you're not. “A steady stream of fake moaning and ‘Oh BABY!’ is what you’ll find on TV, but in most instances, that's simply distracting, quite possibly annoying, and will quickly give you a sore throat!” she says. “Let yourself go. When you are enjoying what is happening, your body will naturally express it.”

3. Being Insecure About Your Body

You’ve figured out by now that nothing is perfect, and that nothing goes as planned. So apply that same logic to whatever makes you insecure in the bedroom. Fogel says that confident women are more desirable and have better sex: "Everyone has those parts of their body that make them insecure, but focusing on [them] is a surefire way to take away from the enjoyment of sex. Just let go, love who you are and enjoy the ride.”

4. Faking Your Orgasms (Most Of The Time)

As you approach the big 3-0, psychotherapist Esther Boykin says that it’s time to make not faking it the rule, not the exception. “Orgasms are one of the few places in life where ‘fake it till you make it’ is never going to work. By now, you are hopefully choosing sexual partners who are invested in your pleasure as much as they are their own. Give them an opportunity to help you reach your happy place, and if it doesn't happen, don't be afraid to share it. Be gentle with your words, and remember that figuring out how to have an orgasm should be as much fun as the orgasm itself.”

Considering you can stand up in front of your entire team and deliver a killer presentation or save up enough money for a two-week trip to Spain, you’re likely mature enough to call your vagina what it is: a vagina. Being squeamish when talking about body parts might have made for a cute game when you were younger, but now, if you’re going to talk about your parts down there (or your partner’s), Singer advises that it’s time to confidently call them what they’re actually medically named.

6. Having Sex When You Don't Really Want To

In your 20s, you might have thought that sex would help bring you closer to someone who maybe didn’t want that to begin with. While sex definitely builds intimacy in a committed, two-way street relationship, using it as a bargaining tool will only continue to disappoint you. That’s why Boykin says that in your 30s, it’s time to really only have sex when you’re fully comfortable with who you’re having sex with.

“Far too often, young women find themselves having sex (fully consensual sex) as a way to create a bond rather than because they are truly in the mood or even ready to fool around. If you haven't already, your 30s are the perfect time to kick the habit of using sex as a way to create a false sense of emotional intimacy,” Boykin says. “Whether you are unsure if he [or she] likes you as much as you like him [or her], or if you're trying to convince yourself to stick with a relationship that looks good on paper but doesn't feel special, sex should no longer be a replacement for genuine emotional attachment.”

Regardless of why you might hold off from taking the lead in the bedroom — a bad experience from a previous relationship, or not feeling sexy enough to hop on top — as you get older, taking ownership of your sex drive (and your sex life) is not only healthy, but a turn-on for your partner. “As our confidence builds, we are able to shed the shyness we had in our 20s,” Singer says, "which can range from you being the initiator to exploring ways that you can be the dominant from time to time.” And the right partner will want to have equal roles in the bedroom, anyways. Go for it.