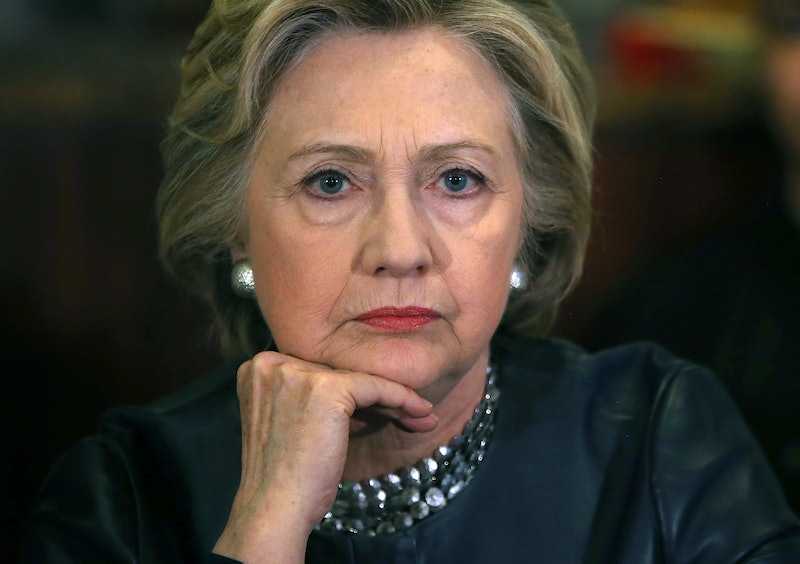 What do you do when none of your options are appealing? That's the conundrum that appears to have conservative billionaire Charles Koch thinking Hillary Clinton might make a better president than any of the three Republican candidates. But while the Democratic frontrunner has often said she will stand for those who choose not to stand with her, she's clearly not interested in standing with the Koch brothers.

In an interview with ABC's This Week, Charles Koch raised eyebrows when he fell just shy of endorsing Clinton's White House bid. After revealing he felt Bill Clinton had — in some aspects — been a better president than George W. Bush, Koch said it was possible the current Democratic frontrunner would make a better leader than any candidate running on the Republican ticket.

"It's possible, it's possible," Koch said when asked if he thought it was "possible that another Clinton could be better than another Republican." But Koch hesitated, stumbling over his words for a moment when asked outright if he could see himself supporting Hillary Clinton. "We would have to believe her actions would be quite different than her rhetoric. Let me put it that way," he said, referencing Clinton's numerous criticisms of the Republican donors.

It was a surprising statement considering Koch and his brother David are well-known (and to many liberals, well-hated) influential mega-donors for conservative Republican politicians. According to Bloomberg, the two have "spent hundreds of millions of dollars supporting Republicans" who share their ideas on taxes and small government. Clinton, a Democrat and a critic of the Koch brothers' political reach, has largely not been on that list.

It seems a Koch endorsement is the last thing Clinton wants. She was quick to distance herself from the well known conservative mega-donor. "Not interested in endorsements from people who deny climate science and try to make it harder for people to vote," she tweeted Sunday afternoon.

Clinton has never minced words when it comes to her feelings about the Koch brothers. "They stand for things that I find abhorrent, that would be bad for our country, bad for our future," Clinton said of the Koch brothers during a Democratic primary debate with rival Sen. Bernie Sanders in March.

Koch told This Week he was so far unable to support the candidacies of Republican frontrunner Donald Trump, Sen. Ted Cruz, or Ohio Gov. John Kasich and was opposed to many of the stances they had taken, including on taxes and immigration. He said Trump's proposal to ban Muslims from immigrating to the US and force those already living in the country to register in a database was "monstrous" and "reminiscent of Nazi Germany."

Koch isn't alone in feeling there's no great option on the ballot. Anyone who's ever voted is likely familiar with the "lesser of two evils" principle, or the idea that, when faced with two bad options, your best option is to choose the least harmful. But if Koch does ultimately decide he'd prefer to see Clinton in the White House, the Democratic frontrunner isn't likely to want his support given how villainous many liberals in her support base find him. This might be the one endorsement no Democratic candidate would want to publicize.