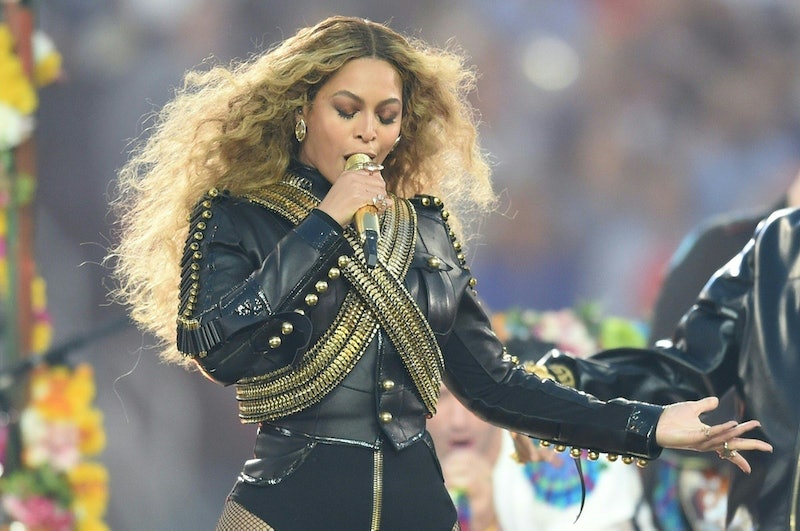 Lemonade isn't just a refreshing summer time drink anymore — it's Beyonce's new album, which everyone can't stop talking about. Lemonade the visual album dropped on HBO and Tidal on Saturday night with gorgeous imagery and even more beautiful lyrics. And while all of the songs are amazing, so it's hard to pick out the best lyrics in Lemonade , I had to try. Along with home movies of Bey's parents, her husband Jay Z, and her daughter Blue Ivy, the visual album includes some very telling spoken-word lyrics and poetry (some are quotes by the amazing poet Warsan Shire).

Lemonade is an epic and emotional journey through the ups and downs of an intense marriage — which judging by the lyrics, may have included infidelity and then forgiveness. But I'll just let the lyrics speak for themselves, because no matter what fans say, Beyonce has left all the feelings and the hurt to be interpreted through her art. Check out some of the most stunning and best lyrics in Lemonade below.

1. "You can taste the dishonesty / It's all over your breath as you pass it off so cavalier"

From the song "Pray You Catch Me," Bey makes lying sound awful, yet beautiful.

2. "My lonely ear / Pressed against the walls of your world"

From "Pray You Catch Me," this lyric gives us a sense of Beyonce's loneliness, trying to understand her partner. Who knew even Bey feels lonely?

The chorus to "Pray You Catch Me" melodically tells the story of a silent cat-and-mouse game between two partners: She wants to catch him in the act, and she wants him to catch her in the act of catching him. But at this moment, they can't confront each other; it's all suspicion right now.

4. "Nothing else ever seems to hurt like the smile on your face / When it's only in my memory / It don't hit me quite the same"

The second verse of "Pray You Catch Me" expresses Beyonce's pain at seeing her partner's smile — something that used to bring her happiness, because she knows the source of that smile is someone else.

In just two lines of the song "Hold Up," Bey samples the Yeah Yeah Yeah's "Maps" and makes reference to Jay Z's verse on DJ Khaled's song "They Don't Love You No More."

6. "I'm telling these tears, 'Go and fall away, fall away' / May the last one burn into flames"

Burning away the sadness in "Freedom."

7. "Can't you see there's no other man above you? / What a wicked way to treat the girl that loves you"

What a way to say "how dare you cheat on me" in the track "Hold Up."

8. "I smell your secret, and I'm not too perfect / To ever feel this worthless"

Bey knows something's up and she admits that she's (gulp) not perfect, but she also knows this situation isn't perfect either in "Hold Up."

Sounds like even Beyonce has her moments when it comes to jealousy in "Hold Up," which even includes looking through her man's call list.

10. "Know that I kept it sexy, and know I kept it fun / There's something that I'm missing, maybe my head for one"

Beyonce sings that she kept the relationship light, but perhaps that wasn't the right decision, considering how serious this issue is in "Hold Up."

In "Hold Up," I love how Beyonce addresses a distinct female issue: If women act jealous, men tend to label them as "crazy," even if the woman's suspicious are totally founded and he's been lying for a long time. Men label women as jealous and/or crazy so easily, even when they are wronging the woman herself. Here, Bey owns it and says she'd rather be called "crazy" than be walked all over by a cheating man.

It seems to be a common refrain in Lemonade with Beyonce telling her love that she loves him more than the job, the fame, and the money. Love can conquer all for Bey.

13. "Let's imagine for a moment that you never made a name for yourself / Or mastered wealth, they had you labeled as a king / Never made it out the cage, still out there movin' in them streets"

Here, Bey presumably addresses Jay Z's own status in "Hold Up." He's one of the biggest rappers and he has a checkered past.

14. "Never had the baddest woman in the game up in your sheets"

If Beyonce is talking about herself here, I'd say that's an accurate description of herself in "Hold Up."

So many questions from "Hold Up."

A lyric from "Don't Hurt Yourself" that only Bey could get away with.

18. "Dishes smashed on my counter from our last encounter / Pictures snatched out the frame / Bitch, I scratched out your name and your face"

The hurt is real in "Sandcastles.

A declaration of independence from "Don't Hurt Yourself."

In "Don't Hurt Yourself," Bey declares that she is irreplaceable. (Duh.)

The chorus of "Don't Hurt Yourself" is important because Beyonce tells her portrayer that any hurts he doles out to her is more of a reflection of his flaws than hers.

An alternate interpretation of the chorus from "Don't Hurt Yourself" is that since this song is about a couple, if he makes hurtful actions toward her, he's really hurting them both as a team.

The "Don't Hurt Yourself" title refrain is Bey's reminder that just because he's hurting her, she shouldn't blame herself for his selfish actions.

Here, Bey admits that she would love him, even without all his money and power.

In "Don't Hurt Yourself," Bey conveys her power and his, but also calls out the fact that he's a liar.

Beyonce takes away the attention from her tears and puts the blame on her partner for causing them in "Don't Hurt Yourself."

The mic drop (and wedding ring drop) of "Don't Hurt Yourself."

Unlike Justin Bieber, Bey is not sorry in her own song "Sorry."

Bey, doing what she needs to do in "Sorry."

The chorus of "Love Drought" states that only the couple can work to fix their own issues.

Looks like Beyonce even abides by the ol' middle finger diss when it comes to what her partner did to her.

When he comes crawling back in "Sorry."

Revenge is sweet in "Sorry."

34. "Looking at my watch, he should've been home / Today I regret the night I put that ring on / He always got them f*cking excuses / I pray to the Lord you reveal what his truth is"

I'm going to let this one from "Sorry" stand alone.

35. "He only want me when I'm not there / He better call Becky with the good hair"

The lyric that launched the BeyHive on high Becky alert.

Here, Bey states that she loves their relationship more than the fame.

37. "Six inch heels, she walked in the club like nobody's business / Goddamn, she murdered everybody and I was her witness"

Could the song "6 Inch" (featuring The Weeknd) be about Bey's husband's mistress? Or is it about Beyonce herself? Either is possible.

38. "She don't gotta give it up, she professional / She mixing up that Ace with that Hennessy / She love the way it tastes, that's her recipe / Rushing through her veins like it's ecstasy, oh no / She already made enough but she'll never leave"

Whoever "6 Inch" is about, it's a woman who knows how to play hard and work hard.

39. "Came into this world / Daddy's little girl / And daddy made a soldier out of me"

"Daddy Lesson" is arguably the most popular of the songs on Lemonade and with good reason — Bey opens up about her dad with a country groove.

40. "When trouble comes to town / And men like me come around / Oh, my daddy said shoot"

It sounds like her dad's biggest lesson to her was to stand up for herself.

In "Love Drought," Bey talks about working through issues in a relationship.

Beyonce goes to blame herself in "Love Drought" and backtracks beautifully, realizing it's not entirely her fault at all.

43. "We built sand castles that washed away / I made you cry when I walked away / And although I promised that I couldn't stay, baby / Every promise don't work out that way"

A fantasy collapses due to reality in "Sandcastles."

44. "I break chains all by myself / Won't let my freedom rot in hell / Hey! I'ma keep running / Cause a winner don't quit on themselves"

45. "Found the truth beneath your lies / And true love never has to hide / I'll trade your broken wings for mine"

Together, the couple tries again with profound belief that their love is true in the love ballad "All Night."

More like this
The Best Memes & Tweets About Beyonce's New 'Renaissance' Album
By Radhika Menon
Will Beyoncé Be At The BET Awards To Perform “Break My Soul” Or Attend The Show?
By Jake Viswanath
Big Freedia Reveals The Real Meaning Of Beyoncé’s “Break My Soul”
By Radhika Menon
Beyoncé Might Be Plotting Secret Intimate Gigs In The UK
By El Hunt
Get Even More From Bustle — Sign Up For The Newsletter