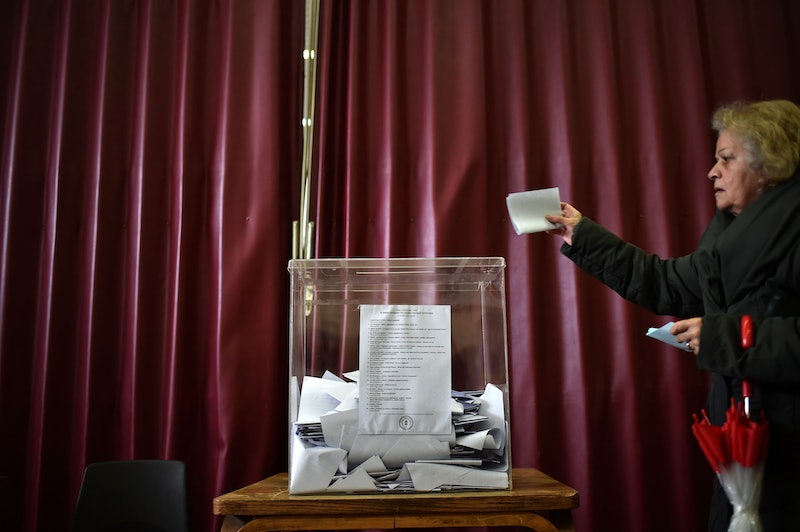 The April 26 primaries, aka the Acela Primary, are this Tuesday, and the national spotlight will turn to some of the nation's smallest states, including Delaware. Voters in the First State will cast their ballots in the presidential primaries from 7 a.m. until 8 p.m. The good news for anyone paying rapt attention is that Delaware's primary results should be out early, maybe even before voting officially ends. Because Delaware is so small (it only has three counties), votes can be tallied very quickly. If sufficient numbers of voters head to the polls early in the day, some of those totals can be gathered before the polls close and potentially call the election before it's officially over.

However, a drawback to this is that there aren't a plethora of polls underway, so there isn't a particularly clear idea of whom the state will go for. Right now, Hillary Clinton leads Bernie Sanders by seven points, while Donald Trump is dominating the Republican field with a 37-point lead, but those are only from a single source, which is never a truly accurate measure. If those numbers hold, Clinton should get about 11 of the state's 21 pledged delegates, while Sanders would get the other 10 under the Democrats' proportional primary system. Meanwhile, Trump would take all 16 Delawarean Republican delegates, as per the winner-take-all system used by the GOP.

However, come the general election in November, the Republicans hardly stand a chance there. Delaware is considered a safe Democratic state, with less than 200,000 registered Republican voters statewide -- about half the number of registered Democrats.

Besides the two big-name candidates, Delaware Democrats also have the option to vote for lesser-known candidate Roque "Rocky" De la Fuente, a Mexican-American entrepreneur from San Diego who was inspired to run after derogatory comments about Latinxs from Trump early in the campaign. Republicans will see some familiar names still on the ballot, including Ben Carson, Jeb Bush, and Marco Rubio -- reminders of the crowded field that has whittled down in the past several months.

Unfortunately for Delaware voters, it is too late to either register or change party affiliation. So if you wanted to switch parties for the state's closed primaries, you're out of luck this year. But for those who are ready and anxious to get the results of the April 26 primary, you can check back on Delaware's official state election page for those results.