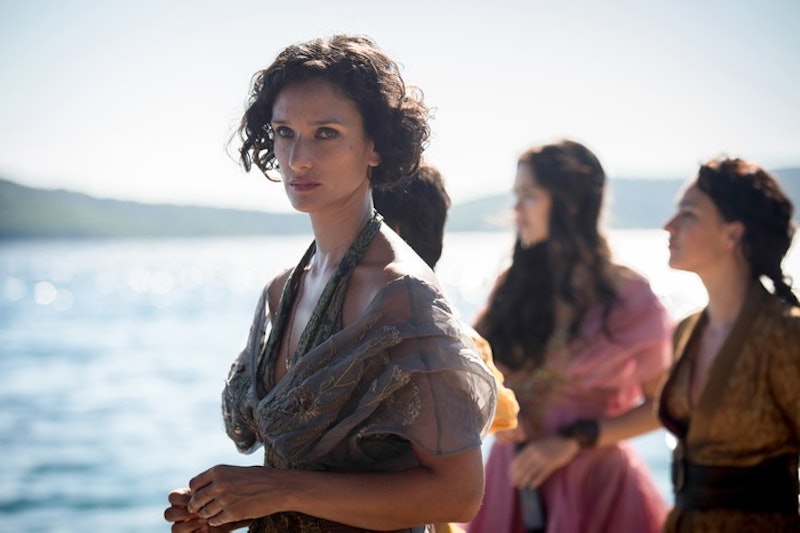 Say what you will about how cruelly this series can treat their female characters, but during Sunday night's Season 6 premiere, Ellaria Sand took a powerful stand on Game of Thrones . Tired of watching in the shadows as the men all around her use their power in terrible ways, Ellaria decided to take over Dorne for herself by murdering Doran Martell along with his few followers. And, while the act itself was both shocking and gory, her speech was what really resonated and proved that things in Dorne were about to change under the leadership of her and her daughters.

Before killing Doran, she recounted the many times the male rulers of Dorne have failed in their duties time and time again, even allowing women to be abused and raped by men without retribution. But, all of that is about to change now that she's in charge and intends to wipe out the male side of the Martell line. "Your son is weak just like you, and weak men will never rule Dorne again," she said right before delivering the fatal blow. Ellaria proved to us last season that she was a force to be reckoned with when she made the bold move of killing the sweet and innocent Myrcella Lannister. That was done when she had very little power, so imagine what she will be capable of now that she is the one sitting on the Dorne throne.

On the whole, this is a very intriguing twist for her character's storyline. Female leaders are kind of awesome. (Looking at you, Dany!) And I am certainly all about female empowerment on this show, especially considering how poorly some of them have been treated in the past few seasons. (Looking at you, Sansa!) Dorne may have admittedly been a bit of a snoozefest last season, but now that this power dynamic has changed, I'd say things are about to get pretty interesting. Cersei may have just met her match.