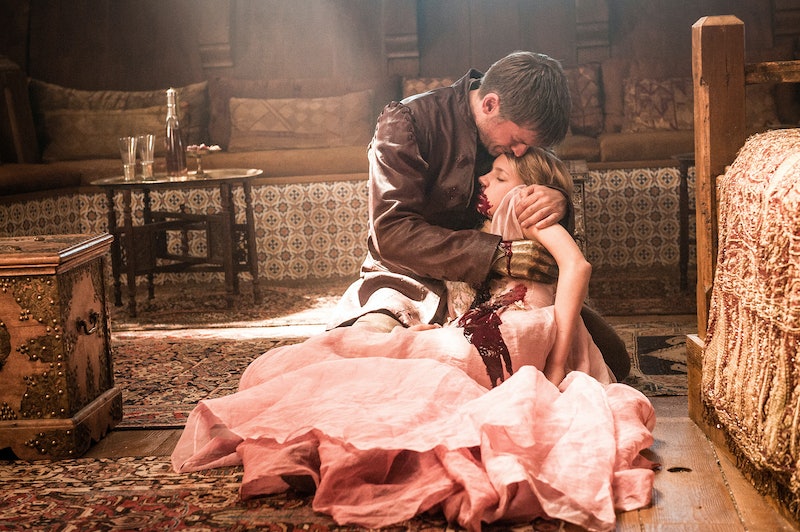 The time has come, guys. The writers of Game Of Thrones have officially decided to ruin our lives by basically trying to kill everyone on this series in the Season 5 Game of Thrones finale. Aside from watching Theon kill Myranda (and saving Sansa in the process), seeing Stannis' wife hanging from a tree after committing suicide, and Jon Snow stabbed by his own men, there was still more carnage to be done in the episode. Basically no one was safe, not even the youngest. A fleeing Myrcella was poisoned as she left Dorne, and I blame Ellaria.

After seemingly settling the tension between the Lannisters and the Martells, Myrcella and Jaime were on their way back to King's Landing with Trystane Martell, Myrcella's prince fiance. This was the exact moment that Jaime decided to tell Myrcella about her true parentage, a fact she apparently already knew. And when it seemed as though someone in this show would for once have a happy ending, things went downhill fast as blood started coming out of her nose. How did it happen, and what does this mean for the future of the series?

Before her departure with her father and fiancee, Myrcella shared an uncomfortable kiss on the lips with Ellaria Sand. At first it looked to just be a strange moment, but quickly after acknowledging Jaime's reveal and stating she believed a part of her "always knew," Myrcella shared a tender moment with her uncle/father before she started bleeding. The camera then cut to Ellaria who was starting to bleed from the nose herself before taking an antidote from her necklace.

So, what does this mean for the weak link between the Lannisters and Martells? Well it's basically over at this point, whether Myrcella lives or not. (Let's be honest, Myrcella is probably not surviving this.) Jaime will most certainly bring war to Dorne, and considering what we've seen from the Martells thus far, they are not to be underestimated.