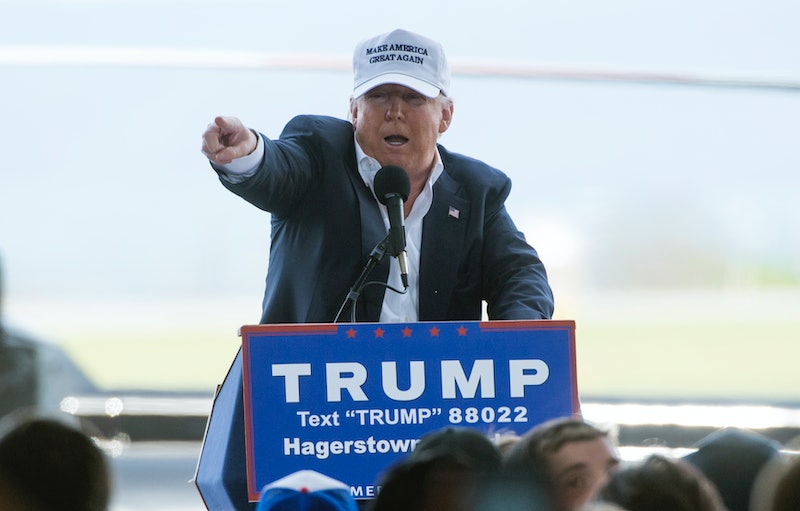 Earlier that evening, both Cruz and Kasich officially banded together to stop Trump from winning the Republican nomination with a divide and conquer strategy. Cruz will campaign in Indiana and Kasich will work with Oregon and New Mexico. Though both candidates share a common cause — stop Trump at all costs — Cruz and Kasich will surely remain competitive with each other if a second ballot should arise. Until recently, Trump's political rivals have refused to admit he has legitimately widespread support. Now, it might be too late for them to reverse the repercussions of that denial.

To avoid a contested convention, Trump must win an additional 392 delegates. Currently, there are 733 left in the race. Needless to say, Cruz and Kasich will do everything in their power to swipe those delegates from underneath him. Trump's complaints that the Republican Party is uniting against him have finally become entirely valid.

It's unclear why the frontrunner believes that dropping the "g" off of "lying" makes Cruz and Kasich sound any more criminal. If his goal was to make them sound like characters from an old Western, he hit the nail on the head.

The statement published on his campaign website is, more or less, a drawn out version of his tweets. He described how poorly Cruz and Kasich have done in the recent primaries and mentioned that collusion is illegal in some industries. In the final paragraph, the billionaire touched on a point upon which Trump dissenters can even agree: political parties are corrupt.

Because of me, everyone now sees that the Republican primary system is totally rigged. When two candidates who have no path to victory get together to stop a candidate who is expanding the party by millions of voters, (all of whom will drop out if I am not in the race) it is yet another example of everything that is wrong in Washington and our political system.

His claim may have been received better if he had utilized basic grammar skills. The statement doesn't necessarily reflect his Ivy League education and the fact that he "knows words." Not to be nit-picky, but the president is expected to do a lot of writing and speaking. This run-on sentence about Kasich isn't supporting that skill.

Governor Kasich, who has only won 1 state out of 41, in other words, he is 1 for 41 and he is not even doing as well as other candidates who could have stubbornly stayed in the race like him but chose not to do so.

The Republican Party is pulling whatever strings it can to delegitimize Trump's popular support among the people. Trump might not be an ideal candidate, but the tactic the GOP is relying on to stop him isn't totally democratic. Does the political system ever have an excuse to get dirty? We'll be asking ourselves that question in the months to come.