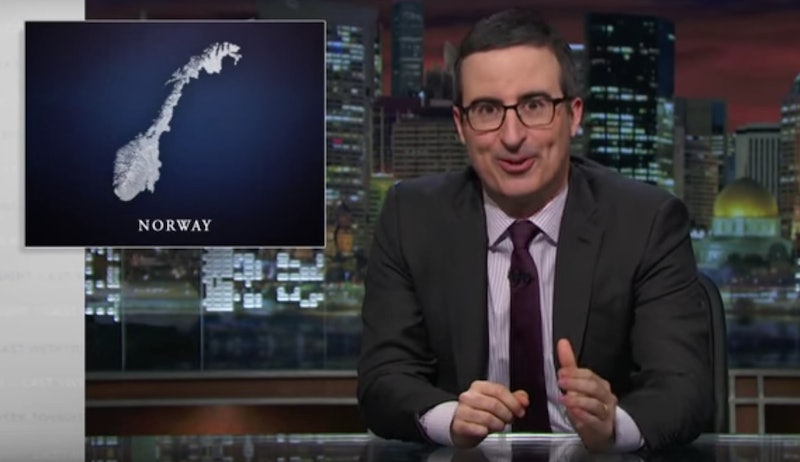 Europe can't figure out its response to the biggest immigration crisis on the continent since World War II. That's nothing new, but one country has been tough lately drafting one of Europe's toughest asylum policies, one that's set to deport about 10,000 people. You probably wouldn't guess, but it's Norway, and John Oliver has something to say about the country's immigration minister — and, oh, is he right.

Sylvi Listhaug, Oliver says, is "perhaps the most Norwegian-looking human being who has ever lived." And as of late, also one of the most ridiculous. She has gotten some flack for her right-of-center party's attempts to stem the number of migrants and refugees reaching the country. Many have arrived via Russia, riding bicycles across the countries' borders near the Arctic Circle. Walking across or driving was long illegal but biking seemed to be a loophole.

This week, she was looking into a different route, though. The one most migrants and refugees entering Europe have attempted, crossing the waters of the Mediterranean. In an attempt to soften her image, Listhaug traveled to the Mediterranean and jumped into the water "to experience what it was like to be a migrant," which Oliver points out, "already sounds stupid and then you see what she was wearing."

It's a huge, orange inflatable suit. Kind of like a full-body floaty. Oliver, rightly, thinks this was hilarious:

I think the most ridiculous part of this stunt is that this looks genuinely pleasant. I would happily spend my next vacation gently floating in the Mediterranean in a giant pumpkin suit.

Maybe the idiocy was worth it though. She claimed she learned something, though, after being pulled out of the water onto the "rescue" boat. Her reaction immediately after exiting the water?

To see a boat like this when you're drowning, that must be amazing.

To which Oliver asks, "How is that something you did not already know?" Furthermore, she — unlike the migrants who risk their lives to reach Europe — was obviously in no danger, or as Oliver puts it.

For the record, that is not drowning, that is floating around giggling, dressed like an aquatic Cheeto. ... There is no doubt European policy makers need a better understanding of the dangers faced by migrants and refugees, and if belly flopping around the Mediterranean like a dolphin on Quaaludes, helps you do that, maybe it's a good thing.

Given its timing, this seems like a terrible choice on Listhaug's part. As many as 500 immigrants are thought to have drowned on their way to Europe last week. Maybe she'll get something out of the experience, but don't hold your breath. She hasn't said anything right in the past either. Last time she made a fool of Norway's asylum process, she talked about Jesus — or her version thereof. Basically, that Jesus wouldn't want to burden the Norwegians, even if it interfered with his message. "You should help as many as possible — and that's not about helping many in Norway," Listhaug said.

"Obviously," Oliver responds, "she's living by one of Jesus' most-remembered sayings: 'Do unto others as you would have others do unto you — offer not applicable in Norway, a country that does not exist yet.'"

For the refugees' sake — and Norway's — hopefully this incident will bring attention to the crisis... and the need for a new Norwegian immigration minister.