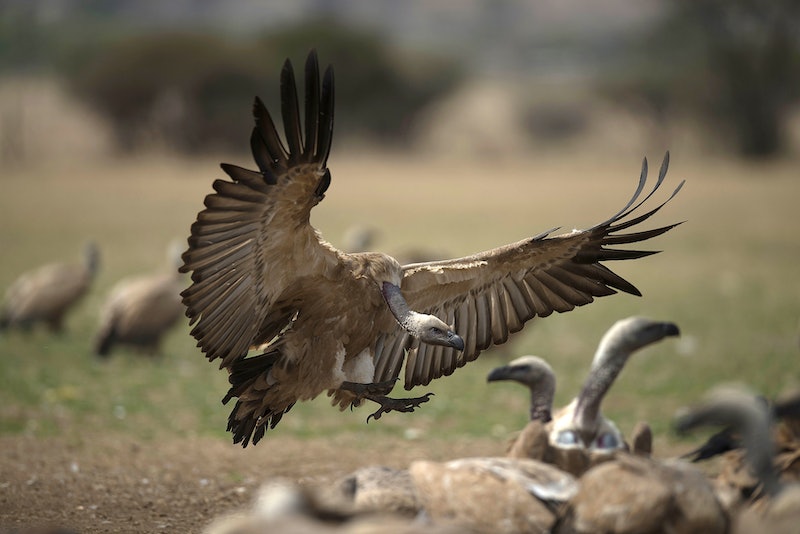 On Sunday's episode of Last Week Tonight, John Oliver turned the nation's attention toward vulture funds. Banks have used these questionable hedge funds to prey upon Puerto Rico in a way that's all too similar to vultures scavenging carrion. Facing over $70 billion of debt and a devastating 11.5 percent sales tax, the island territory isn't doing so hot economically. Allegedly, vulture funds prevent the island from receiving help from the banks to which it owes money. Oliver explained the unfortunate situation:

As much as 30 percent of Puerto Rican debt is now held by vulture funds. And if you are alone in the desert and see vultures perched above you, your first thought is never, 'Oh, thank God. The vultures are coming to help.'

But what exactly are vulture funds, and what makes them so detrimental? Let's just say that their name makes a whole lot of sense. Investopedia compares the funds to "circling vultures patiently waiting to pick over the remains of a rapidly weakening company." In this case, that weakening company is a population of over 3.5 million people who aren't too different for you or me. And like other investments that allow big banks to disproportionately prosper, vulture funds are technically legal.

The people behind these hedge funds perceive a company's future failure as easy money. As the company accumulates more debt that will have to be paid off with interest, its I-owe-you to the creditor, who invested in the debt at a discounted price, becomes substantially larger. In turn, the creditor ultimately makes a profit by suing the doomed company for not paying it back. And in most cases, that was the plan all along. Ethically, it's comparable to knowingly pushing subprime loans on unsuspecting borrowers.

Still, some people claim creditors don't have any intention of winning back the money they lent. Instead, they trade the debt for a piece of a new company or industry. Most recently, however, this wasn't the case with Argentina and United States hedge funds. Fifteen years ago, Argentina defaulted on $80 billion in debt that was bought up by American hedge funds as the nation's economy began to decline. Instead of settling for investments in other Argentine businesses, the hedge funds sued Argentina and won back most of their money. What's so bad about demanding what's owed? Many Argentinians maintained the hedge funds preyed upon the country from the get-go.

The Pulitzer Center's Jina Moore pointed out that in the 1980s and 1990s, these vulture funds were known as debt swaps. Though such swaps have helped some economies recover, they're not the cleanest solution to the problem. According to Moore, vulture funds are a perfect example of the kind of fundamentally irresponsible lending which, as the housing market crash showed, has become all to common in the United States.