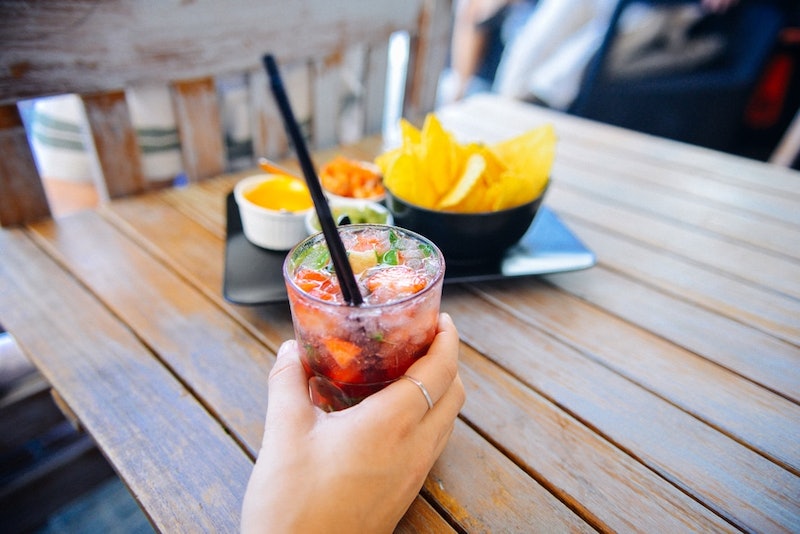 While every holiday is an excuse to celebrate, there are a few big ones that seem to truly encourage downing a bunch of libations — St. Patrick's Day, New Year's, and of course, Cinco de Mayo. While a bunch of people like to get a little buzzed on occasion, there are others who would rather forgo the booze — and for these people, Cinco de Mayo mocktails are a great way to "join in" without feeling any kind of pressure. After all, drinks don't need to include alcohol in order to be fancy and celebratory.

Cinco de Mayo celebrates the victory of the Mexican army over the French army at the Battle of Puebla back in the 1860s, during the Franco-Mexican War. As the holiday evolved, it also began celebrating Mexican culture and good times. In Mexico, it's common to feast on traditional delicacies and partake in parades and live music. Here in the United States, we can often find a bunch of Cinco de Mayo bar specials, especially on margaritas and other drinks that contain tequila.

So, what should you ask for if you're abstaining? Well, there are a bunch of selections that'll taste great and won't lower your inhibitions in the meantime — and they aren't necessarily recipes that just omit the booze. Here are a few of the ultimate best mocktails that you can make to celebrate the big day.

This delicious mocktail from The Merrythought uses mint, limes, and of course, cranberries. And even better, it includes muddling. If you've never muddled before, trust me — you'll feel like a true fancy bartender, if you're making this one at home. It includes cranberry simple syrup, and the site has some easy instructions to make this, as well. (Hint: It's so easy, that it just includes water, cranberries, sugar, and some simmering over a stove.)

Here's another mocktail from The Merrythought crew — and this one looks almost too pretty to drink. To make yourself a Lemon Lavender, you'll need fresh lemon juice, lavender simple syrup (which is similar to cranberry simple syrup, except, obviously, with lavender), grenadine, and bitters. Shake it, strain it, and top it with some club soda.

Nothing says "spring" like citrus and mint. Offbeat and Inspired gives us this recipe, which combines both orange juice and lime juice, simple syrup (which likely you're a pro at making, by now), pure cranberry juice, and some chopped up mint leaves. These ingredients will be shaken up, topped with sparkling water, and then served. Garnish is optional, but if you're juicing your own oranges, the peel will make it look super festive.

It's time to prune your basil plant (or at least, head to the grocery store for some fresh basil). The Kitchn is always a great place for innovative drink recipes, and this one has my mouth watering a bit. But, that could be because I have a serious problem when it comes to sodas. You'll need one pound of strawberries, a half cup of those aforementioned basil leaves, half of a lemon worth of juice, sugar, and carbonated water. If you own a SodaStream, it'll be even easier. You can juice the strawberries with a blender before adding them to the rest of the concoction. This one requires both heating and cooling, so you'll definitely need to give yourself some time to prepare. But patience is totally worth it.

In case you didn't realize, limes and Cinco de Mayo go together quite well. In fact, there have often been lime shortages around the holiday, which have been somewhat newsworthy. This year, however, things seem to be on the upswing, so you should celebrate by making this cucumber limeade, courtesy of Deborah over at Taste and Tell. Her recipe includes a cup of lime juice, as well as some lime zest, mint leaves, cucumber, sugar, plain water, and sparkling water. This one will need at least an hour of preparation prior to serving, but it's perfect to prepare for your Cinco de Mayo gathering.

While we're talking about cucumbers, let's discuss a mocktail with a little kick to it. Caitlin from The Merrythought provides this recipe, which includes jalapeno peppers, cucumber, cilantro, lime juice, and some Polar Half & Half seltzer. It definitely looks a bit intimidating, so it's perfect for the lady or lass who likes to take beverages to the next level.

Are you a fan of juice? Then this mocktail will be right up your alley. And, honestly, this might be the easiest one to make out of the list thus far. What's Cooking, Love? uses Bolthouse mango juice, sparkling white grape juice (or tonic water), and... that's it. If you're out at a bar, you'll be thankful to know that similar ingredients will likely be available, and simple for your bartender to concoct. Nobody likes to be a bartender's bother. Frustrated bartenders kill the Cinco de Mayo vibe.

Naturally Ella discovered this recipe while pregnant, and shortly after, it became her go-to mocktail. Also, it's extremely simple to put together, which is always an added bonus. Ginger beer, seltzer water, and lime juice are all that's required for a tasty, no-fuss drink that'll make you feel pretty darn classy.

Sure, the original recipe from A Cozy Kitchen features some gin, but in all honesty, this recipe has a lot going on that it can easily be omitted. Also, let's get real. Virgin Gin Gin Mule is just really fun to say. This recipe has some similarities to the Ginger Lime Fizz above, but includes a ton of muddling, simple syrup, and a bunch of mint.

If it includes pomegranate, you automatically feel healthier — I call it the "Pomegranate Conspiracy." (And by "I call it," I mean "I just coined that phrase two seconds ago.") Sarah from Offbeat and Inspired shares this recipe, which was originally concocted as an alternative to wine. It includes cranberry juice, pomegranate juice, ginger beer, and about a wedge worth of lime juice. Sarah notes that you can also use ginger ale, instead of ginger beer, especially if you'll be making this for a big group of people.

Doesn't this one look incredible? Grilled pineapple is a little known treasure, and adding it as a garnish to this drink, from The Merrythought, is quite a yummy idea. Seriously, I don't know if a garnish could possibly taste better than this. As for the drink itself, you'll need lime juice, sparkling orange juice, club soda, and honey alongside the half cup of grilled pineapple. The pineapple, lime, and honey need to be blended together, and the orange juice and club soda will top it off.

Mom On Timeout had Cinco de Mayo in mind while posting this excellent recipe. She points out that in lieu of rum, you can use either a rum extract, or even some lemon-lime flavored soda. She's a fan of sweet drinks, so if you have a sweet tooth, this might be your best bet.

Sarah, from Offbeat and Inspired posted this recipe on the same day she announced she's expecting twins. And after learning you're expecting twins, you often crave a stiff drink to ease the panic. (Yet, obviously, you're smart and stick to mock versions instead. ) This is the first mocktail to include apple cider, which is always a celebratory beverage, along with thyme simple syrup, high quality tonic water, and lemon juice. All of the ingredients get stirred, except for the tonic, which gets added into the mixture last.

Deborah from Taste and Tell tries to mimic a mocktail she had on a cruise, which she originally figured was just a non-alcoholic mojito. But since a non-alcoholic mojito would likely consist of just mint and lime, this special cruise drink obviously had something a bit extra. To make a nojito, you'll need those ingredients, as well as grapefruit juice, sugar syrup, lemon juice, and club soda.

Watermelon is definitely a taste of summer — and while May 5 is technically in the spring, you can bet that grocery stores will be promptly displaying their watermelon selection regardless. How Sweet It Is shared this amazing drink, which includes vanilla beans, ginger syrup, watermelon juice, and club soda. While the cucumbers are technically a garnish, they happen to pair quite well with this mocktail, adding even more refreshment to your Cinco de Mayo.

Images: The Merrythought (4), Offbeat + Inspired (3), The Kitchn, Taste and Tell (2), What's Cooking, Love?, Naturally Ella, A Cozy Kitchen, Mom On Timeout, How Sweet It Is, Pexels