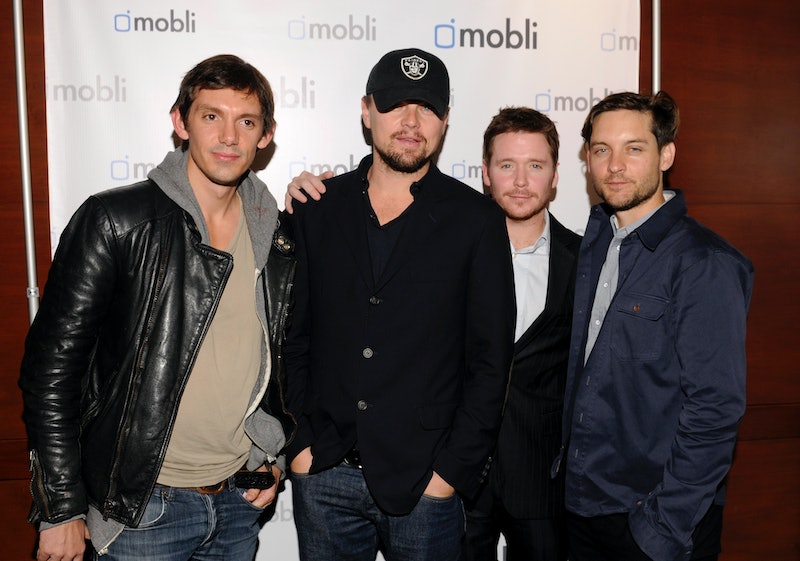 Leonardo DiCaprio has been a part of Hollywood for most of his life and our own lives. I can vouch that no other actor really mattered to me once I caught a glimpse of him as Luke Brower during his stint on Growing Pains. His hair! His smile! It was all too much. Since then, DiCaprio has grown into a respected, Oscar-winning (finally) actor and environmental activist, and one thing many fans will notice is that he rolls with a very loyal friend squad. He might have a rotating wheel of ladies he's dated, but DiCaprio's famous friends are a strong group that have stuck around for a long time.

I can imagine that being in the business for as long as he has can make it very difficult to be friends with "normal" folk. DiCaprio has opened up about his friendships to Rolling Stone, saying,

I've got plenty of new friends through the years, too, but I've held on to some of them for 25 years now... There's an inherent comfort level that can't be duplicated and can't be manufactured. You don't have to do catch-up interviews — they're up-to-date.

Some of DiCaprio's close friends have been co-stars or directors, but almost all of them are famous in their right. Most of us might not ever know what it's like to be in his inner circle, so here are 11 of Leonardo DiCaprio's lucky famous friends that we can live vicariously through.

Luka Haas and DiCaprio became friends when they were constantly bumping into each other at auditions in the '90s. They both infamously auditioned for This Boy’s Life and What’s Eating Gilbert Grape, with DiCaprio beating him out both times. In an interview for Texas Monthly in 1996, Haas said of his relationship with DiCaprio, "Leo is just a guy — he’s my friend... We’re both very lucky because we make money doing art. Why should I want to be him?"

Kevin Connolly also ran in the same group of young actors auditioning for similar roles in the '90s. Connolly swiftly became one of DiCaprio's closest friends and their friendship is still going strong; the two were even spotted this past January partying together with Orlando Bloom in L.A.

Campbell and DiCaprio were rumored to have a little fling way back in the '90s, but they have remained very close friends throughout the years. DiCaprio was a close friend of her ex-boyfriend Vladmir Doronin, and they have been spotted vacationing together. Last summer, DiCaprio and Campbell were DJs at a friends house in Malibu, and it looked like the party I needed to be at.

Tobey Maguire has been BFFs with Leo since they were about 12 years old. DiCaprio opened up in an interview with Esquire of when he spotted young Maguire filming a film on the street:

Kate Winslet and Leo DiCaprio's friendship is the stuff of legends. They were both young actors in Titanic, the film that would shoot them into super stardom, and they have shared their love for each other many times over the years. They are perfect.

DiCaprio seems to be a "No New Friends" kind of guy, but he and Hill hit it off after being co-stars in Wolf of Wall Street. They've been seen partying up on a yacht or two and making joint appearances on SNL.

Diaz and DiCaprio co-starred together in 2002's Gangs of New York. Being that she's blonde and beautiful, rumors have surfaced that the two were dating at some point, but the two always remained friends. They have reconnected at Cannes Film Festival and even partied together for his birthday.

According to Hello Magazine, Cooper and DiCaprio have been friends since their 20s, when Cooper worked at a hotel in NYC while enrolled at the Actors Studio and DiCaprio just started to hit it big with Titanic. They have kept in touch and hung out over the years, and have even had a sweet date with their mothers at a Golden Globes after party in 2014.

DiCapio and his old friend "Marty" have done a total of five films together, and, although they are of different generations, they have forged a very close friendship and working relationship. Scorsese spoke to Parade in 2012 about their connection,

It seems like DiCaprio's second home is court side during Lakers games, and that's where Zac Efron met his idol and future friend. Back in 2010, Efron told The Examiner about the time he approached DiCaprio at a game, saying,

He was like, ‘Dude, what are you doing tomorrow? Come over tomorrow — let’s hang out.’ That’s a little taste of how cool he is. He’s just very down to earth. He’s just an awesome dude. He’s been nice enough to hang out with me a few times.

Rumors have continually circled that Rihanna and DiCaprio have been having an on and off fling for the past few years, but sometimes men and women can just be friends. A crazy concept, eh? There has never really been any hard evidence that they've dated exclusively, but they've been spotted partying together. DiCaprio even helped throw Rihanna her 27th birthday party. Sounds like he is indeed a good friend, even if there are some benefits thrown in there.

DiCaprio is a lucky man to have so many talented, ambitious, supportive and loyal friends by his side, especially in a business that is usually trying to break people down.