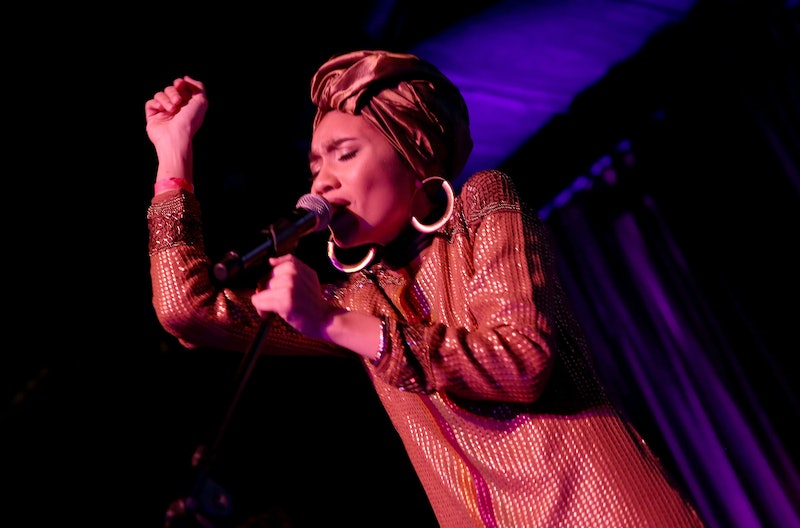 Usher has returned to the commoners almost a half year after his last move, which was an interactive music video on Tidal called "Chains" featuring Nas and Bibi Bourelly. (Which, let's be real, all of us overlooked because Tidal is a huge committment). But perhaps even more joyous is the artist with which he returned: the crazy new-ish talent that is the singer Yuna. This sweet-voiced woman who features Usher on Yuna's new song "Crush" has been working with everybody lately, from Pharrell to Owl City. But who is Yuna? She is as up-and-coming as they come, so get to know her now so you can tell people later that "I knew her before she was big."

In a recent interview with Billboard, we learn a lot about this undercover celebrity, Yuna. For example, when she was young, she learned how to play guitar from YouTube videos and started songwriting in both English and Malay. The Malaysian-born songstress started out posting folk-pop songs on MySpace, and, when she got feedback, up and left for Los Angeles, where she was signed by Fader Label and started working with Pharrell. If that's not an underdog story, I don't know what is.

Her debut self-titled album was released in 2012 and made it to #23 on the Pop chart and #86 on the Top 100 Albums on iTunes. Her sweet voice and chill vibe makes it some easy listening, but the lyrics are sometimes deeply profound and sad. A perfect example of that sort of feel in her songs is the collaboration with Usher, which talks about a pair of friends that love each other, but can't seem to admit it to each other.

Yuna is a proud Muslim and shows it most visibly in the way that she dresses. In the interview with Billboard, she admitted that she gets a lot of flak for her style of dress,

People say, 'You should let your hair out; you shouldn't be oppressed — you're not in Malaysia anymore. You should show your curves and be proud of it.' But I am proud — it's my choice to cover up my body. I'm not oppressed — I'm free.

In a country where female artists are expected to flaunt their bodies as well as their musical prowess, she stands out as an artist who doesn't follow the crowd. Her music is strictly about her music and not so much her look. That being said, her style, with her beautiful head scarves and turtlenecks, is not to be ignored.

"Crush," which is the singer's first song to hit radio in the U.S., will appear on Yuna's third album, Chapters.The album is primarily a breakup album, which will make it something relatable for us all. Another song that will appear on the album is "Places To Go," which is a less sad look at breaking up since it focuses on, you know, the moving on part.

I'm so excited to see what this eclectic artist brings to the U.S. music scene. Her refusal to be anything other than what she is makes her so inspiring, and I have high hopes for her career. Three cheers for Yuna, three cheers for Usher, and three cheers for us, the new loyal fans.